This first note isn’t an email, but a note appended to the form when setting up a recurring donation/subscription for this website and the Barnhardt Podcast. I post this because there are other commentators and talking heads of note who are fence-sitting on the Bergoglio qua Antipope question, and they are frightened that they are going to collapse their donations if they “go public”.  All I can repeat is the motto that has served me well over the past decade or so: Do the right thing, and God will provide.

I will dispense with superlatives and merely say thank you, truly, thank you for your insights. There are few lights these days, along the way, precious few in our Church. I keep my bearings, barely, thanks to you and others doing similar public work. Thank you for it.

I saw the staff held by Bergoglio, marked it off as another strange choice by a strange, likely non-Catholic man. Thought nothing more of it. But not you. You researched it. It is a Stang (!). I checked your work. Oh, my. Does that ever change things.

I agree with you on Pope Benedict XVI. But this, this …. this is a game changer for me.

I will now begin regular support. Your work here is absolutely crucial. Keep it up. Well done ma’am.

Here is an email from a priest who says both the Novus Ordo and the August and Venerable Rite of Pius V, and can no longer commemorate “Francis” in the Canon.  I’ll provide a few additional details and advice below.

Count me among those clergy who will never again regard Jorge Bergoglio as a pope. Your latest piece with pictures on the satanic staff carried by this anti-pope was the last straw. Even in the face of this damning evidence, sadly, my fellow diocesan “conservative” clergy still try to spin it. A terrible delusion is upon us. Thanks for all you do to help dispel this terrible darkness.

Now, I’m sure many of you have your hackles up JUST AS I DID when I was initially corresponding with Father, and here’s why: You can’t play semantic games like this with the Mass, commemorating one man at one Mass, and another man at another, based upon the earthly audience.  Fathers, this is completely untenable.  I pointed out to Father that especially after sending me the email above, it would now be totally morally impossible for him to continue to commemorate “Francis”, because Father has stated and is interiorly morally certain that Bergoglio is an Antipope.  It is one thing to be MISTAKEN and to MISTAKENLY commemorate the wrong man – St. Vincent Ferrer did it for years, albeit those dynamics were purely political, and the man St. Vincent was backing wasn’t an enthusiastic public backer of sodomy who celebrated liturgies whilst wielding a warlock’s stang. It is quite another thing to be morally certain that a man is, in fact, an Antipope, and that the true pope is very much alive and retains the Petrine See whether he likes it or not, and to then freely choose to COMMEMORATE THE ANTIPOPE.  This is not only a species of lying, it is also sacrilege.

What makes it worse is the fact that the choice to commemorate the Antipope ONLY IN SOME CIRCUMSTANCES (in this case, celebrating the Novus Ordo) because of FEAR OF RETRIBUTION by the Francischurch denizens there present, and the bishop by extension, is a clear manifestation of the vice of effeminacy.  Remember, “effeminacy” does not refer to men who act queeny.  It is a vice that EVERYONE is susceptible to, namely the unwillingness to do anything good that would or could result in a decrease in one’s own immediate personal pleasure and/or comfort.  St. Thomas calls effeminacy the vice of “softness”.

So, Father said that he will now simply say “Our Pope” when he says the Novus Ordo.  But, it probably is just a matter of time before the woman with three husbands who got her tubes tied after her second child and thinks her sodomite nephew and his “husband” are “the cutest couple ever” comes to Mass for the first time in years, and raises hell.  So, pray for priests.

I also post this because I want other priests out there to know that THEY ARE NOT ALONE in either commemorating Pope Benedict, or nauseated at “having to” commemorate “Francis” and wanting to stop.

The fully correct course of action is to stop saying the Novus Ordo completely, and to commemorate Pope Benedict at the Te Igitur.  That is what every priest SHOULD do.  Barring that (sigh), the next “least bad” option is the “Our Pope” without name route in the Novus Ordo Canon.  But look, eventually you are going to have to make a choice, and the choice is climbing up on the Cross with Our Lord, or comfort and security in this world, and possible eternal damnation in the next as a result.  There is no Third Way here.

Finally, let me once again post this axiom, which one and all should memorize and repeat in order to maintain one’s bearings in these rough seas:

It is IMPOSSIBLE to cause schism, or to enter into schism, by the act of holding the Catholic Faith, whole and entire.

Again, just stop and think about that until it sinks in. This is something that CLEARLY Cardinal Burke and the rest have never done.  Because hiding from responsibility and shirking one’s duty is a full-time job, y’all.

Pray for Pope Benedict XVI, the one and only living Sovereign Pontiff, whether he likes it or not. 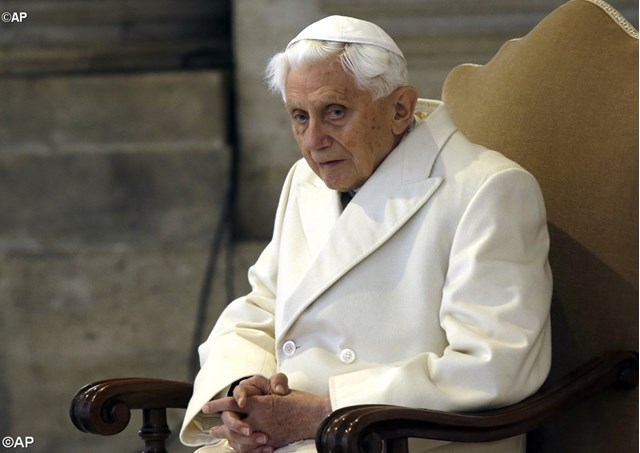