The filthy faggot Cardinal of Newark, New Jersey, Joseph Tobin, tweeted this to his favored sodomy partner back in February.  He quickly deleted it, then lyingly claimed that it was meant for his sister.  No one bought this.  Why?  Because Tobin is a ginormous, raging, open-secret faggot, and everyone knows it.

George Neumayr has discovered who Tobin’s “baby” is.  It is the Italian actor Francesco Castiglione, who – get this – is LIVING IN TOBIN’S RECTORY (and also his rect… Nevermind. Too easy.) 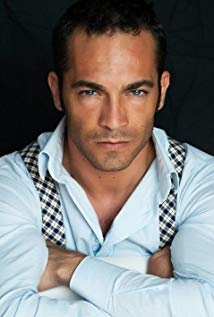 I like doughy, multi-chinned old prelates with access to nine-figure slush funds, tickle fights, and long walks along the Jersey Shore. And blasphemy.

The story is that Tobin is giving the poor Italian movie star shelter while he improves his English at Seton Hall.  Because, you know, successful movie stars can’t rent an apartment or anything.  Gay Italian movie stars have to shack up with gay Cardinals (but I repeat myself) LEST THEY DIE HOMELESS UNDER A BRIDGE.

But the kicker is this: The sodomite actor, Castiglione, is starring in the VATICAN-PRODUCED film on St. John the Baptist, “Il Precursore” (The Precursor).  Yes, that’s right, the production credit is:

St. John the Baptist.  The Forerunner of Christ, whom Christ said was “the greatest man ever born of woman”.

I’m telling you, these faggots luxuriate in blasphemy.  It really makes one wonder if Tobin is one of the Satanists.

Tobin cruised and hooked up with him in Rome, and now engages in sodomy with him inside the episcopal mansion in Newark. And sends him messages saying “Nighty-night, baby, I love you”.

Now, you might be asking yourselves, “Why would a super-handsome actor engage in sodomy with a revolting slug like Tobin?”

Faggots are ALL ABOUT leveraging and wielding power.  The faggot actor can blackmail the shit out of Tobin, and gets to live off Tobin’s criminal racket of embezzling Archdiocesan and Vatican revenues AND, as we now know, the ginormous sodomite slush fund set up by Auntie Blanche McCarrick, “The Papal Foundation”.  Tobin gets to engage in sodomy with an Italian movie star, and thus tell himself how powerful and elite he is.  Tobin probably gets access to other sodomite actors through Castiglione, as well.  Fresh meat for the Grindr.

Here is an Italian press piece for the John the Baptist Movie.

Also, remember that U.S. Ambassador to the Holy See @CallyGingrich should be notified of this, and her invaluable opinion sought.