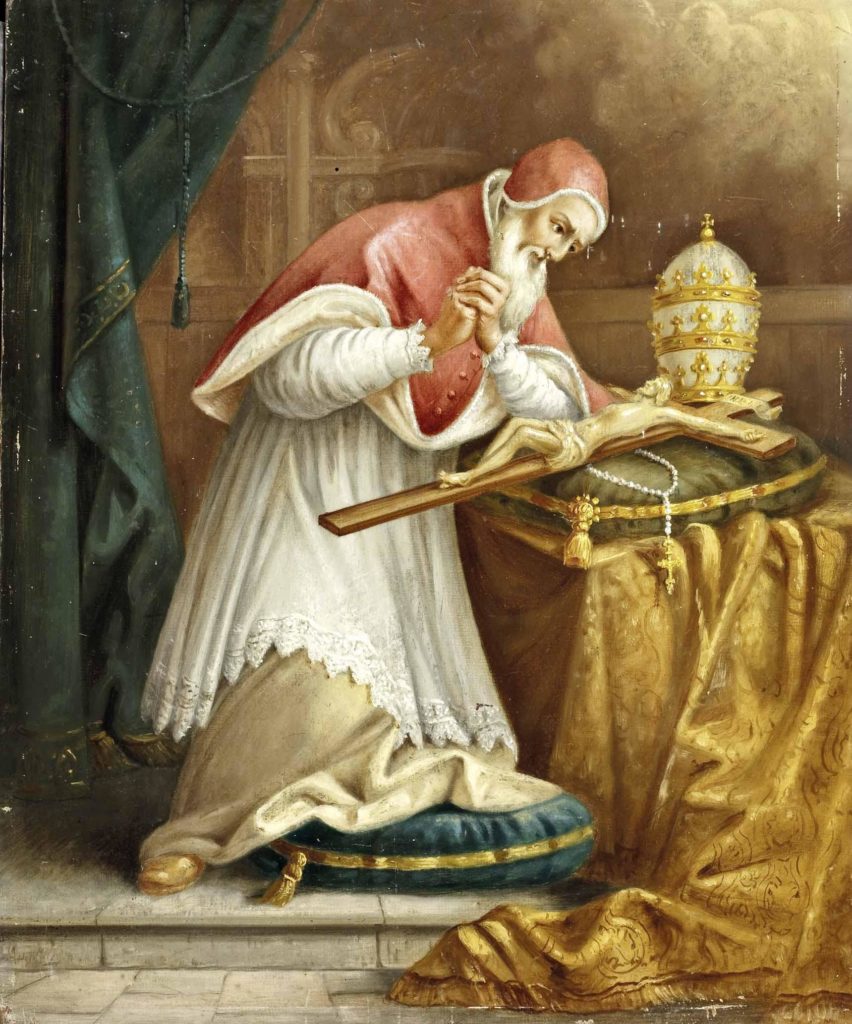 I usually don’t blockquote Wikipedia, but this into to the Wiki article on Pius V pretty much can’t be beat:

Pope Saint Pius V (17 January 1504 – 1 May 1572), born Antonio Ghislieri (from 1518 called Michele Ghislieri, O.P.), was head of the Catholic Church and ruler of the Papal States from 8 January 1566 to his death in 1572. He is venerated as a saint of the Catholic Church. He is chiefly notable for his role in the Council of Trent, the Counter-Reformation, and the standardization of the Roman rite within the Latin Church. Pius V declared Thomas Aquinas a Doctor of the Church.

[But wait, it gets better…]

As a cardinal, Ghislieri gained a reputation for putting orthodoxy before personalities, prosecuting eight French bishops for heresy. He also stood firm against nepotism, rebuking his predecessor Pope Pius IV to his face when he wanted to make a 13-year-old member of his family a cardinal and subsidize a nephew from the papal treasury.

[But wait, it gets better…]

By means of the papal bull of 1570, Regnans in Excelsis, Pius V excommunicated Elizabeth I of England for heresy and persecution of English Catholics during her reign.[Sigh…]He also arranged the formation of the Holy League, an alliance of Catholic states to combat the advancement of the Ottoman Empire in Eastern Europe. Although outnumbered, the Holy League famously defeated the Ottomans at the Battle of Lepanto in 1571. Pius V attributed the victory to the intercession of the Blessed Virgin Mary and instituted the feast of Our Lady of Victory. Biographers report that as the Battle of Lepanto ended, Pius rose and went over to a window, where he stood gazing toward the East. Then, turning around, he exclaimed “The Christian fleet is victorious!” and shed tears of thanksgiving.

“All the evils of the world are due to lukewarm Catholics.”
-Pope St. Pius V