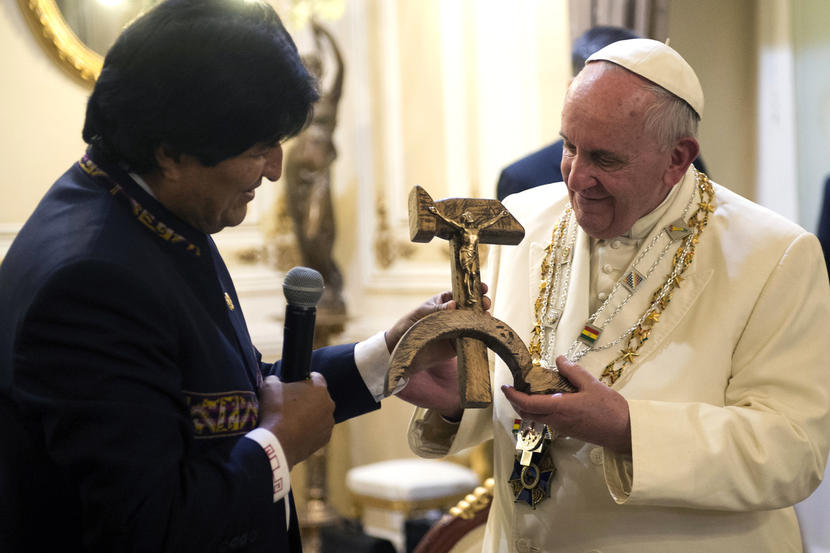 For, indeed, although the socialists, stealing the very Gospel itself with a view to deceive more easily the unwary, have been accustomed to distort it so as to suit their own purposes, nevertheless so great is the difference between their depraved teachings and the most pure doctrine of Christ that none greater could exist: “for what participation hath justice with injustice or what fellowship hath light with darkness?”

Here is just the introduction of the Encyclical by Pope Leo XIII on socialism.  I highly recommend reading the whole thing.  Papal documents before the middle of the 20th century and the infiltration of The Church were brief, straightforward, even blunt, and easy to understand.  Remember, clarity is of the Holy Ghost.  Nebulousness, ambiguity, confusion, chaos and yes, logorrhea (there’s a six dollar word for you – as in: someone needs to invent the equivalent of Pepto Bismol for logorrhea) is of the devil.

To the Patriarchs, Primates, Archbishops, and Bishops of the Catholic World in Grace and Communion with the Apostolic See.

At the very beginning of Our pontificate, as the nature of Our apostolic office demanded, we hastened to point out in an encyclical letter addressed to you, venerable brethren, the deadly plague that is creeping into the very fibers of human society and leading it on to the verge of destruction; at the same time We pointed out also the most effectual remedies by which society might be restored and might escape from the very serious dangers which threaten it. But the evils which We then deplored have so rapidly increased that We are again compelled to address you, as though we heard the voice of the prophet ringing in Our ears: “Cry, cease not, lift up thy voice like a trumpet.”1 You understand, venerable brethren, that We speak of that sect of men who, under various and almost barbarous names, are called socialists, communists, or nihilists, and who, spread over all the world, and bound together by the closest ties in a wicked confederacy, no longer seek the shelter of secret meetings, but, openly and boldly marching forth in the light of day, strive to bring to a head what they have long been planning—the overthrow of all civil society whatsoever.

Surely these are they who, as the sacred Scriptures testify, “Defile the flesh, despise dominion and blaspheme majesty.”2 They leave nothing untouched or whole which by both human and divine laws has been wisely decreed for the health and beauty of life. They refuse obedience to the higher powers, to whom, according to the admonition of the Apostle, every soul ought to be subject, and who derive the right of governing from God; and they proclaim the absolute equality of all men in rights and duties. They debase the natural union of man and woman, which is held sacred even among barbarous peoples; and its bond, by which the family is chiefly held together, they weaken, or even deliver up to lust. Lured, in fine, by the greed of present goods, which is “the root of all evils which some coveting have erred from the faith,” they assail the right of property sanctioned by natural law; and by a scheme of horrible wickedness, while they seem desirous of caring for the needs and satisfying the desires of all men, they strive to seize and hold in common whatever has been acquired either by title of lawful inheritance, or by labor of brain and hands, or by thrift in one’s mode of life.

READ THE REST HERE.  IT GETS EVEN BETTER.