A. SuperNerd overdosed on candy, and there were also some logistical obstacles on both sides, but it looks like we will be recording the next Barnhardt Podcast on Tuesday night. Thanks for all of the inquiries.

B. Just a little reminder to one and all about liturgy, and bad liturgy.  Obviously, I think that living close to reverent liturgy, either the Tridentine Mass or Divine Liturgy, should be an extremely high priority, BUT, to those who say, “Novus Ordo Mass is all there is available to me, and I’M NOT GOING!”, let me hasten to remind you of the following:

The most “irreverent” Mass in history was Calvary itself. No one was actually paying attention to the Sacrifice of the Lamb except the small cohort led by The Blessed Virgin, St. John and St. Mary Magdalen.  Only they assisted in silence.  What else was going on at Calvary?  People were walking around, talking, ignoring Our Lord at best, laughing, shouting and heckling Him at worst.  One of the major aspects of crucifixion was the fact that the crucified were naked, completely exposed and obviously unable to cover themselves in any way – complete humiliation.  Can you imagine the taunts and filth that the Roman soldiers hurled at Our Lord? Don’t kid yourselves, folks.  They were probably making sexual taunts at Him that would turn even our jaded stomachs.  That is, of course, when they weren’t playing dice.  The Jewish priests also came to mock and scorn.  And there were probably quite a few people who came just to gawk. They had no idea what they were looking at other than three men being tortured to death.  They just gawked at the spectacle, then walked away.

Now consider the Apostles.  None except St. John were there.  Can you imagine the regret that they all felt for the rest of their lives for not having been there?  It was the most important event in history, in fact, it was the central event in all of history – so central that everything before and everything after is and will be reconciled through the central point of Calvary.  And they missed it.  They freely chose to stay away, cowering in hiding.

It is pretty clear that the days of being able to easily find a valid – never mind licit – Mass are numbered.  Antipope Bergoglio has his henchmen hard at work writing a new non-Mass “ecumenical service” that will fulfill the prophecy of the Mass being almost completely eliminated from the earth.  And as I have said before, when the apostate anti-church goes into full schism, they will take every square inch of real estate with them, and will be unanimously legally recognized as “the Catholic Church”. At this point, to be caught off guard by this will be simply inexcusable.

My advice is the same as what I suspect the Apostles would say: Go to Mass while you still can, even if it is Novus Ordo.  Nothing that happens at a Novus Ordo Mass will be as bad as what was going on at Calvary itself. If bad things happen, pray in reparation as the Blessed Virgin did.  Pray the Rosary. Remember that it is perfectly fine to NOT receive Holy Communion, and instead make a Spiritual Communion – remember, no one received Holy Communion at Calvary. Christ Himself, the High Priest, was the Priest Celebrant and the Victim, and He immolated Himself, thus consummating the Sacrifice. Don’t find yourself, like the Apostles, filled with regret at NOT going to Calvary.

If Pope Benedict XVI is NOT publicly acknowledged as the one and only living Pope, then the problems will continue to multiply because that is what happens when base premises are false – the logical truth table continues to generate false results that superficially appear to be true.

Bergoglio is obviously an arch-heretic, but remember – and this is SO IMPORTANT – Bergoglio’s heresy is NOT GERMANE to the question of who the Pope is.  The question hinges entirely on Pope Benedict’s invalid attempt at partially resigning, and in his mind “bifurcating and expanding” the Petrine Office, which is substantial error per Canon 188.  Bergoglio, technically, has nothing to do with it.  One HAS to get the base premise right if one expects to truly resolve the situation.  Half-measures aren’t good enough. 99% true is still 1% false, and that 1% poisons and ruins everything.

Pope Benedict XVI’s substantial error predates the Bergoglian antipapacy by two weeks.  The fact that Bergoglio is an arch-heretic who “seems” to be proving the promises of Our Lord and Savior Jesus Christ to specifically pray for and protect Peter and all of Peter’s successors as false is only a CONFIRMING COROLLARY DATASET that Bergoglio is not the Pope – it is NOT the base premise itself.  The Bergoglian antipapacy is a result of Pope Ratzinger’s failed abdication attempt, it is NOT a result of any of Bergoglio’s actions.  So, all of the time and effort that is being spent debating whether or not Bergoglio has “ceased to be the Pope due to his heresy” is nothing but a huge, wheel-spinning dead end and waste of time.  And satan squeals with delight. Satan further squeals like a pig every time the argument is made that “the papacy isn’t really that important and never was” or that “the papacy is just a label” because those erroneous positions are now completely necessary in order to maintain the false premise that Bergoglio is, in fact, the Vicar of Christ on Earth.  Folks, the Papacy does matter, and it is special and specially protected, and the identity of the Pope is of critical importance.  Don’t let anyone, and I mean ANYONE, tell you otherwise.

It seems to me that Pope Ratzinger, if he expects to make it through his Particular Judgment, will have to, before he dies, repent of what he has done, and it seems to me that in order for that to happen, his substantial error and his status as the one and only living pope would have to be publicly acknowledged.  Anything less is simply giving up on Joseph Ratzinger and writing him off as not only damned, but as unable to repent.  No matter how enormous the sin – and Ratzinger’s is nothing if not enormous – God ALWAYS has avenues of repentance available.  All knots can be undone. There is no situation of sin that can not be escaped.  In the case of Pope Benedict XVI, all that would be required is to call a press conference. The solution is so painfully simple, which makes it all the more heartbreaking.

As we are seeing with the glorious implosions of the NFL and Hollywood, absolutely anything can happen, and it can happen with incredible speed.  This is why we must continue to pray, and to pray for THE RIGHT THING. If our prayer petitions do not conform to reality, then what do you expect God to do?  How can God answer prayers that are irrational?  For example, if someone asks God to unmask Hillary Clinton as a shape-shifting lizard Joo, what do you expect God to do with such a petition?  It is nonsensical, thus the petition is void.  Such is the case here.  Asking God to make Jorge Bergoglio a good Pope is irrational and nonsensical, because Jorge Bergoglio isn’t the Pope and never has been and never will be.  It is like asking God to make Bruce Jenner the most beautiful woman in the world.  Bruce Jenner is not now, never has been, and never will be a woman, so the petition is utterly void. Prayers for “Pope Francis” are as ridiculous as prayers to make Bruce Jenner a good pope, or to make Jorge Bergoglio the most beautiful woman in the world.  Falsity is falsity.  In for a penny, in for a pound. It’s ontological and rhetorical gibberish.

Please join me in the Matthew 17:20 Initiative, which entails full fasting two days per week (I do Tuesday and Friday most weeks) and for adding the petition above to your daily prayers. Remember, God won’t answer petitions that are never made, or that are not congruent with reality. 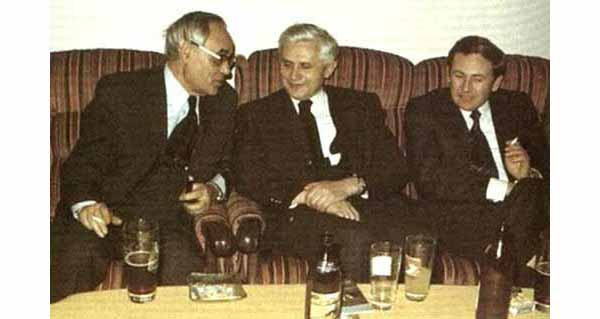 Pray for Pope Benedict XVI Ratzinger. He has so much to repent for before he dies.