The people who are ambushing and attacking rescuers in Houston are the people I have been warning about for years – people who would rape and murder without hesitation, from the youngest child to the most elderly of elders. These people make the genociding torturers of the French Revolution look like boy scouts by comparison.

What did this? How were these monsters created? By the rap/hip-hop culture. The welfare state, beginning especially with LBJ’s “Great Society”, certainly began the breakdown of the black family, but the actual transformation of human beings into demoniacs totally and completely self-purged of all charity came through the music, culture, anti-aesthetic and lifestyle of the rap/hip-hop milieu.

There is no way that the black race in the post-Christian west can survive the intrinsic auto-genocidal quality of the rap/hip-hop culture.

All people of good will admire and salute the Cajun Navy (many, many of whom are black) and their example of manful virility born of true charity.  But get out of there.  Go home, see to your own families and neighbors, and “let the dead bury their dead.”  And we look forward and pray for the day that black people are given their dignity and true freedom back, are liberated from the satanic grip of the rap/hip-hop culture, and many, many black children are conceived and born to their parents, united in sacramental marriage, and raised as co-heirs to the Kingdom of God. 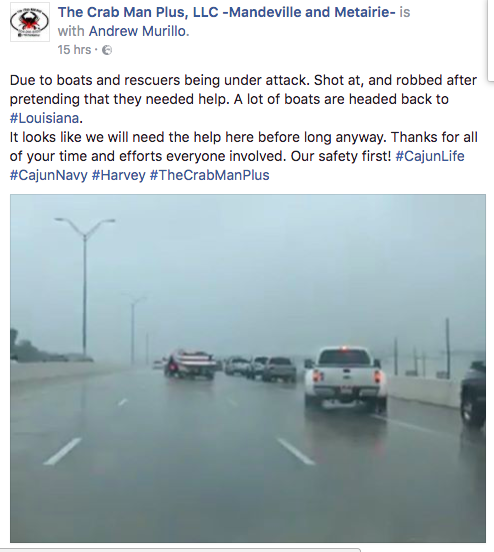