I have received a few “You were right about Trump” emails since the Syrian bombing.  I get the sense that at least some people are shaking off this insane Trumpolatry, and are willing to perhaps listen.  As Trump folds and capitulates to the Washington DC Soros NewWorldOrder machine on item after item, and has now, with the Syria thing, pretty much gone full prostrate before them, and people are seriously talking about the outbreak of hot, nuclear war with Russia, are we ready to turn off the pseudo-professional wrestling kayfabe show and return to dealing with reality?  If so read on.

I have been struck all along by the prominence of Trump’s eldest daughter, Ivanka, as not just a public relations face, but as a policy driver.  It was reported widely in the hours after the Syria bombing that Trump was very heavily influenced to sign off on the Washington NWO/Soros/Pentagon plan of escalation in the Levant theater by Ivanka – in a situation in which we know, and Trump first among them should know, ALL intelligence from the (former) U.S. intelligence agencies, including that supplied to the Commander-in-Chief is riddled with outright lies, and that the use of false flag attacks meant to disorient with double, triple and quadruple crosses is now the order of the day.  In this environment, Trump relies heavily on the sentimental mewings of… Ivanka?

Do you realize that in the Arab world, Trump is now being referred to as “Abu Ivanka”?  Abu means father, so they are now insulting him by calling him not by his own name, but as “The Father of Ivanka”.

We, who bothered to read up on things, knew from the very outset of this farce that Ivanka is a hard-leftist and that her husband, Jared Kushner, is tied up with Soros.  Well, shock!  She was, after all, a member of the Paris Hilton/Kim Kardashian social set for years.  Do you honestly think that anyone of any wisdom or integrity would associate with scum like that?  Now granted, Ivanka Trump has probably 20 IQ points on Paris Hilton, and at least 30 IQ points on the Kardashian slimesses, but folks, that is the definition of damning with faint praise.  Ivanka is particularly keen on the global warming fraud, and has already brought “global warming” communist front groups to the White House.

Ivanka Trump is a FORMAL APOSTATE from Christianity.  Yep.  She formally apostasized, that is, she renounced her baptism and denied that Our Lord and Savior Jesus Christ is God Incarnate who died for the sins of the world, so that she could marry her husband, Jared Kushner, who, did I mention, has Soros connections up to his eyebrows?  Kushner is now one of Trump’s senior advisors, and even was sent to Iraq last week. This Kushner kid is a snot-nosed hedge fund punk, and something quite rare, a practicing Talmudic Jew.  So, Ivanka had to formally renounce Jesus Christ in order to marry Kushner, and they are now raising their children as “observant” Talmudic Jews.

Ivanka Trump’s children are not baptized.

Three of Donald Trump’s grandchildren are not baptized. And his apostate daughter and son-in-law who are responsible for this horror are his two top advisors.

Might I suggest that a campaign of Rosaries and Masses for the conversion of Jared, Arabella, Joseph and Theodore Kushner, and the reversion from aspostasy of Ivanka Trump be organized and undertaken?

I mean, if Ivanka Trump is your de facto “president”, who will possibly lead you into global nuclear conflagration, don’t you owe it to her pray for her and her family?

Man, you simply could not make this stuff up.  I hesitate to joke about next Bruce Jenner being named Secretary of Defense, because at this rate, it could totally happen.

I am reminded of Isaiah chapter 3, verse 12…

As for my people, their oppressors have stripped them, and women have ruled over them.
Populum meum exactores sui spoliaverunt, et mulieres dominatae sunt eis. 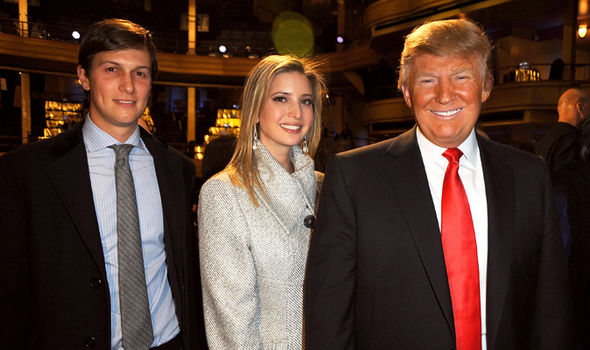