1. I have returned from my pilgrimage, which was absolutely lovely.  I was able to consult with very important people, and have high-level discussions.  Or, at least, I talked, they listened patiently, and they will pray for me.  But, it is always good to make in-person visits, when one can.

2. I was happy to get out of the house for a while after the burgling. Thanks be to God, and to you all, not only has the loss been restored and all costs covered, but there is an excess, which shall go to additional rent payment.  Once again, your munificence is stunning.  I like this parking spot, but am not attached to it, so if I get the sense that the event was anything more than a one-off event, I’ll move on down the track.  But, as you all know, moving is not the “funnest” thing in the world, and I’m not keen to do it for a while.  And no, I’m not traumatized or anything like that.  I’m not the kind of person to be traumatized.  You have to get up pretty early in the morning to traumatize me, or be evil on a scale that defies quantification. These thieves were not evil on that level. And I’m certainly not the type to caterwaul, navel gaze, wallow in self-pity, or otherwise act like a damn woman.  Go to Mass, pray for your enemies, trust in God, and move on.

3. For those of you who are following this “Fra Cristoforo” blog, I have smelled a rat for quite some time now.  My bee-ess meter pegged when the post went up saying “I have a bombshell document about Ratzinger’s abdication…but I won’t release it now.  I’ll release it in a month or so.”

Folks, 999 times out of 1000, when someone starts in with that “I have a secret, but I won’t tell you now – I’ll tell you later” crap, the person is dishonest, doesn’t have anything, and is trolling for attention.  Honest people don’t operate like that.  If I had a document of such vital importance, I would either release it as fast as I could, or, if there was some genuine moral impediment, I’d keep my yap shut.  But I wouldn’t attention whore.  I saw this quite a lot with the Obama birth certificate investigation, namely Sherriff Joe Arpaio and company, and it REALLY pissed me off.  If you call a press conference and say “I have blockbuster evidence…” and then don’t deliver, you’re nothing more than a damn carney. PUT UP OR SHUT UP. Karl Denninger proved beyond a shadow of a doubt that Obama’s “birth certificate” was a truly amateur, obvious forgery, documented everything in detail, posted the videos immediately, and then said, “Here it is.  Take it or leave it.” And, as we all know, everyone left it. Because objective reality sometimes gets in the way of our social life.  My, we’d hate to be looked down upon by … people on FACEBOOK! BIRFER!

4. On an unrelated tangent, it occurred to me today that the (former) U.S. has no extradition treaty with Indonesia.  Just sayin’.

On a tangent to the tangent, the noun “warga negara” means “citizen” or “national” in Indonesian.  Could come in handy for an Indonesian national operating in the (former) U.S. Just sayin’. 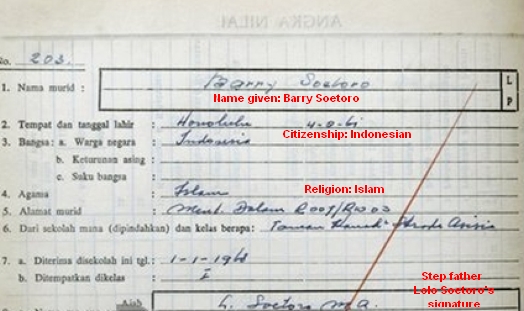 5.  Folks, even the most cursory research shows immediately that Trump is and always has been fully in favor of so-called “universal” or “single-payer” healthcare.  These psychopathic fools have no intention of ever undoing Obamacare – only making it worse. The problem with healthcare in the U.S. is the fact that felony price-fixing and felony anti-competitive practices are not only overlooked, but fully supported by your kleptocratic oligarchy.  The insurance companies and pharmaceutical companies, in particular, engage in price-fixing, price gauging and collusion so severe that it is literally a capital-level crime against humanity.  The solution to the healthcare mess is to make non-catastrophic insurance ILLEGAL, and enforce US Code 15, Chapter 1.  Quoting Denninger now:

“You need just one simple requirement to be enforced against every medical provider of any kind: Everyone must post a price and everyone pays the same price; any sort of hiding, collusion, cost-shifting or similar is met with indictments, prosecution and prison for consumer fraud and racketeering along with violations of the Sherman, Clayton and Robinson-Patman acts.”

Prices for all healthcare and healthcare commodities would immediately fall an average of 90%, maybe more, within a matter of months, and maybe weeks.  Do you understand that this means that health insurance would be UNNECESSARY, just as it has been for the entire history of the world up until just a few short years ago?  Has this thought never occurred to you? How could something go from being completely unnecessary and even illegal, to “necessary”, required by “law”, and being a larger cost than most people’s rent or mortgage payment?  Doesn’t this seem very, very, very wrong?  Of course. It is one of the biggest scams in monetary terms ever executed, and as you all have just witnessed, none of the psychopaths in your kleptocracy has any intention of doing anything about it except to grow it and protect it.

But, but, but… the quality and sophistication of care and technology justifies the increase in price, you say?

Free market, not covered by insurance, all prices posted and advertised.

This would be exactly the case with heart bypass, cancer treatments, childbirth, and pretty much everything else.  EVERYTHING.  Except for the collusion, price fixing and price gauging that the current healthcare racket is built upon. Almost everyone could pay cash for their own healthcare expenses, and the indigent poor could be easily covered by, oh, I dunno… THE CHURCH (imagine that!!) and other secular charitable groups.

I’m sorry, but if you were dumb enough to think that Trump or the congress would ever, ever, ever unwind the biggest racketeering matrix in human history, you deserve what you get.  Keep writin’ those quarterly tax checks! I’m sure if the Republicans can just pick up a few more seats… OH. WAIT.