I have picked up a food poisoning bug, and thus my memory was jogged about these pieces on dogs returning to their vomit. If you want a serious, Catholic discourse on Mercy – real Mercy – then read on.

First, I am going to post the second chapter of 2 Peter in full, because it is stunningly prophetic and specific to the Bergoglian antipapacy.

But there were also false prophets among the people, even as there shall be among you lying teachers, who shall bring in sects of perdition*, and deny the Lord who bought them: bringing upon themselves swift destruction. And many shall follow their riotousnesses, through whom the way of truth shall be evil spoken of. And through covetousness shall they with feigned words make merchandise of you. Whose judgment now of a long time lingereth not, and their perdition slumbereth not. For if God spared not the angels that sinned, but delivered them, drawn down by infernal ropes to the lower hell, unto torments, to be reserved unto judgment: And spared not the original world, but preserved Noe, the eighth person, the preacher of justice, bringing in the flood upon the world of the ungodly.

(*Sects of perdition: That is, heresies destructive of salvation.)

And reducing the cities of the Sodomites, and of the Gomorrhites, into ashes, condemned them to be overthrown, making them an example to those that should after act wickedly. And delivered just Lot, oppressed by the injustice and lewd conversation of the wicked. For in sight and hearing he was just: dwelling among them, who from day to day vexed the just soul with unjust works. The Lord knoweth how to deliver the godly from temptation, but to reserve the unjust unto the day of judgment to be tormented. And especially them who walk after the flesh in the lust of uncleanness, and despise government, audacious, self willed, they fear not to bring in sects, blaspheming.

Whereas angels who are greater in strength and power, bring not against themselves a railing judgment. But these men, as irrational beasts, naturally tending to the snare and to destruction, blaspheming those things which they know not, shall perish in their corruption, Receiving the reward of their injustice, counting for a pleasure the **delights of a day: stains and spots, sporting themselves to excess, rioting in their feasts with you: Having eyes full of adultery and of sin that ceaseth not: alluring unstable souls, having their heart exercised with covetousness, children of malediction: Leaving the right way they have gone astray, having followed the way of Balaam of Bosor, who loved the wages of iniquity,

(**The delights of a day: that is, the short delights of this world, in which they place all their happiness.)

But had a check of his madness, the dumb beast used to the yoke, which speaking with man’ s voice, forbade the folly of the prophet. These are fountains without water, and clouds tossed with whirlwinds, to whom the mist of darkness is reserved. For, speaking proud words of vanity, they allure by the desires of fleshly riotousness, those who for a little while escape, such as converse in error: Promising them liberty, whereas they themselves are the slaves of corruption. For by whom a man is overcome, of the same also he is the slave. For if, flying from the pollutions of the world, through the knowledge of our Lord and Saviour Jesus Christ, they be again entangled in them and overcome: their latter state is become unto them worse than the former.

For it had been better for them not to have known the way of justice, than after they have known it, to turn back from that holy commandment which was delivered to them. For, that of the true proverb has happened to them: The dog is returned to his vomit: and, The sow that was washed, to her wallowing in the mire. 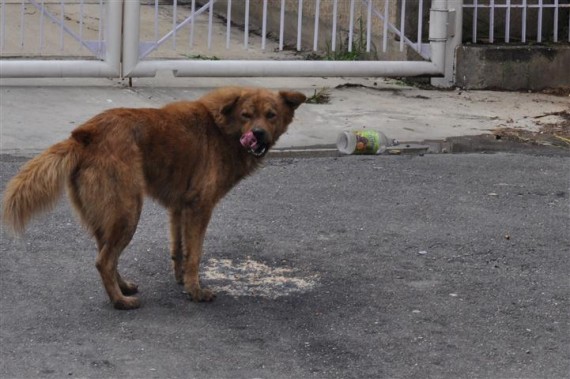 “For, that of the true proverb has happened to them: The dog is returned to his vomit: and, The sow that was washed, to her wallowing in the mire.” 2 Peter 2:22

I am currently reading “Sermons of St. Alphonsus Liguori”, which I cannot recommend with sufficient strength, and I found myself earlier this week reading “Sermon XLI, On the Abuse of Divine Mercy”. Ever so slightly relevant to the current goings-on, eh? “Oooh. This should be interesting,” I thought to myself. Indeed. Allow me to quote from Section 2, emphases mine:

“When you intend to commit sin, who, I ask, promises you mercy from God? Certainly God does not promise it. It is the devil that promises it, that you may lose God and be damned. “Beware”, says St. John Chrysostom, “never to attend to that dog who promises the mercy of God.” If, beloved sinners, you have hitherto offended God, hope and tremble: if you desire to give up sin, and if you detest it, hope; because God promises pardon to all who repent of the evil they have done. But if you intend to continue in your sinful course, tremble lest God should wait no longer for you, but cast you into hell. Why does God wait for sinners? Is it that they may continue to insult Him? No; He waits for them that they may renounce sin, and that He may thus have pity on them, and forgive them. “Therefore the Lord waiteth, that He may have mercy on you” -Isaiah 30:18. But when He sees that the time which he gave them to weep over their past iniquities is spent in multiplying their sins, He begins to inflict chastisement, and He cuts them off in the state of sin, that, by dying, they may cease to offend Him. Then He calls against them the very time He had given them for repentance. “He hath called against me the time” -Lamentations 1:15. “The very time”, says St. Gregory, “comes to judge.”

It was pointed out to me that when Chrysostom uses the pejorative “that dog”, it is far from random name calling. He is referencing the “dog that returneth to his vomit” from Proverbs 26 and 2 Peter 2. The dog that eats his own vomit; the sow that was washed who returns to wallow in mud mingled with her own feces, that is “mire”, is the unrepentant sinner who has no intention of STOPPING THE SINFUL ACTIVITY.

One more block quote from section 5 of St. Alphonsus’ sermon:

St. Bernard says that the confidence which sinners have in God’s goodness, when they commit sin, procures for them not a blessing, but a malediction from the Lord. O deceitful hope, which sends so many Christians to hell! They do not hope for the pardon of sins of which they repent; but they hope that though they continue to sin, God will have mercy upon them; and thus they make the mercy of God serve as a motive for continuing to offend Him.

Pray the Rosary, most especially the Sorrowful Mysteries, the First Sorrowful Mystery being The Agony of Our Lord in the Garden of Gethsemane. The fruit of this mystery is SORROW FOR SIN, which is the utterly critical and essential prerequisite for His Mercy and forgiveness. Beg Him to know what every single one of your sins are, and for you to feel a portion of the agony at your sins that He bore in the Garden, such that you may be animated to STOP DOING THE SINFUL ACTIVITY.

Here is my recording of the Sorrowful Mysteries in Latin with the Litany of Loreto and the text file, specifically for the crushing of and in reparation for the Heresy of Modernism.

PART 2: People Who Actively Will That An Evil Continue Are Ineligible For Mercy

Many people still ask what the abbreviation “ARSH” that I use before dates means. It stands for:
Anno
Reparatae
Salutis
Humanae
“In the Year of the Reparation of Human Salvation.”

The reparation of human salvation began when The Word, the Second Person of the Triune Godhead, became flesh in the womb of the Virgin, and was consummated 33 years later. But we begin counting years from the beginning of our salvation, today, the INCARNATION, not the Passion and Resurrection.

I’d like to point out what the Virgin herself said of God and His Mercy at the Visitation. She said, “And His mercy is from generation to generations, TO THEM THAT FEAR HIM.”

God’s mercy is infinite and its depths can not be plumbed. However, because mercy is, by definition, grief at the distress of evils experienced by another, both undeserved and deserved, if a person does not find the evil they are experiencing repugnant, but rather actively wills that the evil continue, refuses to acknowledge the evil they have committed, and even luxuriate in it and demand that others NOT grieve but rather ratify and celebrate the evil, that person is completely INELIGIBLE for mercy.

To not grieve at the sin of another, but rather ignore it, ratify it, or celebrate it, is itself grave sin, the diametrical opposite of Charity – indifference. To paint indifference as mercy is nothing less than diabolical.

If you are not sorry for your sin, if you are not ashamed, if you have no intention of trying to cease the evil, sinful activity, then God simply cannot extend His mercy to you, because He holds your free will sacred. Sins are those behavioral choices that, for lack of a better term, break God’s Heart. The Law is simply God, in His unfathomable love for us, telling us explicitly what we must do and not do in order to not break His Heart. Filial Fear of the Lord is not wanting to break God’s Heart.

And so, when Antipope Bergoglio, probable False Prophet Forerunner of the Antichrist, contemptuously calls believing Catholics, “Lovers of the Law”, do not, for one second, be ashamed. Contempt for the Law is indifference to Christ. The Psalms are filled with declarations of love for the Law because the Law is God’s love letter to mankind, telling us how best to love Him and be close to Him.

People who knowingly sin with no sorrow, no guilt, no shame and no intention of stopping have no filial fear of God, and may even be guilty of the worst sin there is: Presuming upon His Mercy – that is, sinning boldly without compunction because “Christ HAS to forgive me, so I might as well do whatever I want. If He wants to hang on the Cross and take my sins, I’ll do what I damn-well please, and then hold Him to the contract.” This is the essence and pinnacle of psychopathy.

If you would like to read further thoughts on this, I recommend THIS OUTSTANDING PIECE from Unam Sanctam, and you might also revisit my essays, “The One About FEAR OF THE LORD” and“We Should Be Ashamed.”