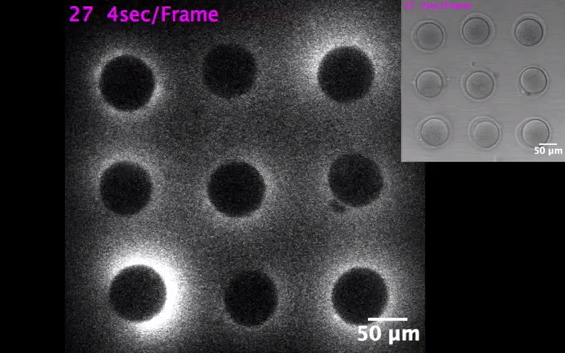 News is going around today that scientists have discovered that there is literally, no joke, a flash of light at the moment of fertilization of an egg when new life begins.  It has to do with zinc being released and fluorescing.  Here is the money quote and link:

The bright flash occurs because when sperm enters and egg it triggers calcium to increase which releases zinc from the egg. As the zinc shoots out, it binds to small molecules which emit a fluorescence which can be picked up by camera microscopes.

Over the last six years this team has shown that zinc controls the decision to grow and change into a completely new genetic organism.

I have a particular fondness/devotion to The Last Gospel.  Now, if you are Novus Ordo, you have no idea what I am talking about because the Freemasonic-Communist-Sodomite infiltrators cut the Last Gospel from the Novus Ordo Mass, which is proof of their malevolency and malignancy.  The Last Gospel, which is the first 14 verses of the Gospel of John, is read at the end of almost every Mass.  And it should be, because it is one of the most beautiful, if not THE most beautiful piece of prose ever written.  If you look at an altar set up for a Tridentine Mass, there are three altar cards – left, center and right – which contain the text of various fixed prayers of the Mass.  The altar card on the left, or Gospel side of the altar, is The Last Gospel.

The news today about a literal flash of light at the moment of conception immediately reminded me of verse 4 in The Last Gospel, “In ipso vita erat, et vita erat lux hominum”, which means, “In Him was life, and the Life was the Light of men.”

Verse 5 goes on to say, “Et lux in tenebris lucet, et tenebrae eam non comprehenderunt.” “And the Light shineth in darkness, and the darkness did not comprehend it.”

I always recite (at a whisper) The Last Gospel along with the priest – whether I can hear him or not.  All genuflect at the words, “Et verbum caro factum est”, “And the Word was made flesh”, so one just keeps one’s eye on the priest, and you “match up” at the genuflection if you can’t hear.  I have the sneaking suspicion that Our Lord likes hearing us say those words, and that He especially likes it when He can listen to us say them from the inside, as His physical substance is just proximal to our heart.  I recommend that everyone do the same – it certainly can’t hurt. If you still have no choice but to go to Novus Ordo Mass, just say it yourself at the end of Mass after the blessing and during or after the recessional.

I should record audio of it, as I can’t seem to find anything on YouTube.

He came unto his own, and His own received him not. But as many as received Him, He gave them power to be made the sons of God, to them that believe in His Name. Who are born, not of blood, nor of the will of the flesh, nor of the will of man, but of God. And the Word was made flesh, and dwelt among us, and we saw His glory, the glory as it were of the Only Begotten of the Father, full of grace and truth.