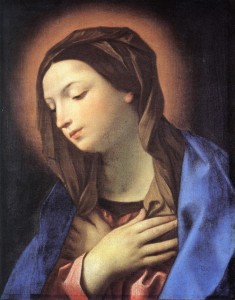 Virgin of the Annunciation, Guido Reni

Today is the Feast of the Annunciation, transferred to April 4th because March 25th, the fixed date of the feast – exactly nine months before Christmas – was Good Friday this year.  This will not happen again until the year ARSH 2157, when we will all be long dead.

And so today we celebrate the beginning of our salvation…

Many people still ask what the abbreviation “ARSH” that I use before dates means.  It stands for:
Anno
Reparatae
Salutis
Humanae
“In the Year of the Reparation of Human Salvation.”

The reparation of human salvation began when The Word, the Second Person of the Triune Godhead, became flesh in the womb of the Virgin, and was consummated 33 years later.  But we begin counting years from the beginning of our salvation, today, the INCARNATION, not the Passion and Resurrection.

I’d like to point out what the Virgin herself said of God and His Mercy at the Annunciation.  She said, “And His mercy is from generation to generations, TO THEM THAT FEAR HIM.”

God’s mercy is infinite and its depths can not be plumbed.  However, because mercy is, by definition, grief at the distress of evils experienced by another, both undeserved and deserved, if a person does not find the evil they are experiencing repugnant, but rather actively wills that the evil continue, refuses to acknowledge the evil they have committed, and even luxuriate in it and demand that others NOT grieve but rather ratify and celebrate the evil, that person is completely INELIGIBLE for mercy.

To not grieve at the sin of another, but rather ignore it, ratify it, or celebrate it, is itself grave sin, the diametrical opposite of Charity – indifference.  To paint indifference as mercy is nothing less than diabolical.

If you are not sorry for your sin, if you are not ashamed, if you have no intention of trying to cease the evil, sinful activity, then God simply cannot extend His mercy to you, because He holds your free will sacred.  Sins are those behavioral choices that, for lack of a better term, break God’s Heart.  The Law is simply God, in His unfathomable love for us, telling us explicitly what we must do and not do in order to not break His Heart.  Filial Fear of the Lord is not wanting to break God’s Heart.

And so, when Pope Francis Bergoglio contemptuously calls believing Catholics, “Lovers of the Law”, do not, for one second, be ashamed.  Contempt for the Law is indifference to Christ. The Psalms are filled with declarations of love for the Law because the Law is God’s love letter to mankind, telling us how best to love Him and be close to Him.

People who knowingly sin with no sorrow, no guilt, no shame and no intention of stopping have no filial fear of God, and may even be guilty of the worst sin there is:  Presuming upon His Mercy – that is, sinning boldly without compunction because “Christ HAS to forgive me, so I might as well do whatever I want.  If He wants to hang on the Cross and take my sins, I’ll do what I damn-well please, and then hold Him to the contract.”  This is the essence and pinnacle of psychopathy.

If you would like to read further thoughts on this, I recommend THIS OUTSTANDING PIECE from Unam Sanctam, and you might also revisit my essays, “The One About FEAR OF THE LORD” and“We Should Be Ashamed.”

quia respexit humilitatem ancillae suae.
Because He hath regarded the humility of His handmaid

Ecce enim ex hoc beatam me dicent omnes generationes,
For behold, from henceforth all generations shall call me blessed.

quia fecit mihi magna qui potens est,
For He that is mighty hath done great things to me,

et sanctum nomen eius,
and holy is His Name,

timentibus eum.
to them that fear Him.

Fecit potentiam in brachio suo,
He hath showed might in His arm,

dispersit superbos mente cordis sui;
He hath scattered the proud in the conceit of their heart;

et divites dimisit inanes.
and the rich He hath sent away empty.

recordatus misericordiae suae,
being mindful of His mercy,

sicut locutus est ad patres nostros,
As He spoke to our fathers,

Abraham et semini eius in saecula.
to Abraham and to his seed forever.