1. It is MONDAY, so that means today the Holy and August Sacrifice of the Mass, will be offered for my Benefactors.  Thank you.

2.  I have been pretty much bedridden for the past week fighting, what I have finally determined to be, an actual influenza strain.  I had a fever for most of last week, and then the fever broke and I thought I was on the mend, but the telltale stinging lung (right, in my case) kept me down (and awake coughing all night – yuck).  I have had pneumonia as an adult, and it is nothing I want anything to do with ever again unless I am to die of it.  And I don’t think I am supposed to die of pneumonia complications from influenza here in my “van down by the river”.  And I sho’ nuff’ ain’t stepping’ foot in no hospital.  Fo-Get-Dat.

3.  Work and research continues apace on the big video on NPD.  I cannot tell you how many points of connection and nexuses keep cropping up.  I will probably try to release the video first as an edited whole, then in shorter clips by specific topic, and then finally the “director’s cut”, which will include the parts where I break down sobbing, blow my nose, and then continue.

4.  People are asking, “Why is this your last video?”  Simply, because I am old and tired, war’s-a-comin’, and this topic is so over-arching, that I really don’t see how I will have anything video-worthy to say beyond it.  It is also, unlike the other videos, even the economics video which touched directly on my professional vocation, such an intensely personal topic, and the prognosis is so bleak and difficult, that it has already damn-near killed me, and may yet.

5.  I will say this: I don’t mean to get all “mystic”, because I am not.  HOWEVER, I can feel with each passing day the palpable demonic presence and shadow falling over Riverville and the world.  It isn’t a paranoia or mere fantasy scapegoat.  It is real.  The demonic is bursting forth out of every crevice.  And as my video will explain, the entanglement of men with the demonic realm is so pervasive that the demonic need not resort to supernatural manifestations.  If they have an army of men to do their dirty work, why not expend them first?  In fact, demonically-allied men can actually do far more damage to souls, as the sight of a supernatural demonic manifestation will actually drive men back into the arms of Our Blessed Lord and His mother.  Just ask an actual exorcist what the effect of having the complete living shit scared out of them by witnessing a demonic manifestation was.  It was almost certainly an increase in personal humility and love of God.  No, no.  The demons want us to kill EACH OTHER as much as possible, because the demons themselves have no credibility, whereas men do have credibility with one another, and thus we will try to rationalize and moralize and justify the behaviors of men – even those who have chosen to walk the demonic path.  Remember, the title of my video will be, “Remember Lot’s Wife.”

6.  I want to make a few quick-hitter points, just because this stuff bothers me when I read it and the simple, obvious explanations go unsaid or uncomprehended.

A.) So, the French Flag, the Tricolore, or the three vertical fields of red, white and blue IS THE FLAG OF THE SATANIC FREEMASONIC REVOLUTION.  Did you not watch my presentation about the French Revolution and the Vendee Genocide?  The Tricolore flag is the flag of the BAD GUYS THAT GENOCIDED THE VENDEE AND TOSSED LIVING BABIES FROM BAYONET TO BAYONET.  Oh my gosh.  Will you PLEASE stop superimposing the Sacred Heart of Jesus over the Tricolore.  It is so blasphemous I can’t even quantify it.  If you are wondering, THIS is the French Flag most commonly used before the Freemasonic Revolution: 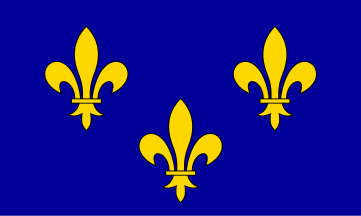 C.) My “Islamic Sexuality: A Survery of Evil” video presentation is going viral again.  Good.  Here is the deal.  The original version was scrubbed from my YouTube account by YouTube because it was flagged as “hate speech”.  THIS is why I encourage MIRRORING and COPYING of all of my stuff.  There are many, many mirrored version still completely available on YouTube.  Just do a YouTube search of something like “Barnhardt Islamic Sexuality” and it will come right up.

I DON”T CARE THAT IT ISN’T THE ORIGINAL VERSION.  My God, what kind of a moral monster would I have to be to actually give a crap about YouTube hit counts or “copyright” with regards to this?  Seriously.  Child rape.  Female genital mutilation.  Rape.  Prostitution.  Incest.  Bestiality. Necrophilia. YOU THINK I’M IN THIS FOR THE MONEY OR PERSONAL GLORY?  Just watch it and spread it, by any means necessary.  In fact, please spread it to other platforms besides YouTube.