I recorded and released my Economics Presentation, titled, “The Economy Is Going to Implode… And You Deserve to Understand Why” thirty-three months ago.

My conscience is clear on this point, both with regards to content and timing, which I view in retrospect as having been just about optimal. It was enough time for all those willing to engage the dataset to do their own thoughtful due diligence, plan, and execute their asset reallocation in an orderly way.

And remember, this is all about simple arithmetic.  Not psychology, not feelings.  It’s math.  To not see this coming is to deny, or to cast as unimportant the foundations of the physical universe. Exponential functions are parabolic. Two exponential functions will always diverge, and the larger will always consume the smaller.  If debt increases 7% per year, and GDP increases 5% per year, the debt will, as a metaphysical certitude, utterly consume the whole as the steeper parabola zooms away from the shallower parabola. 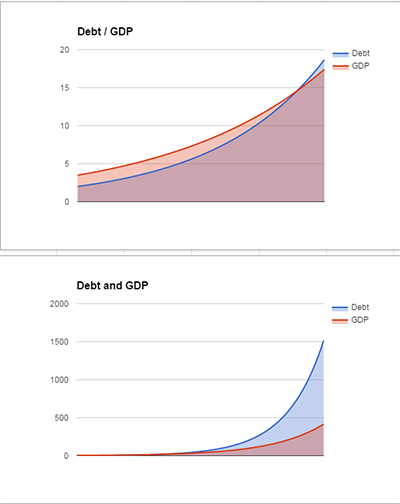 “There is no means of avoiding the final collapse of a boom brought about by credit expansion. The alternative is only whether the crisis should come sooner as the result of voluntary abandonment of further credit expansion, or later as a final and total catastrophe of the currency system involved.”
– Ludwig von Mises