Look, we all know that Pope Francis and his toadies are nefarious characters by now.  I will have more to say about their efforts to schism and destroy as much of the Church Militant as possible using the Sixth Commandment as their primary locus of attack.  HOWEVER, something happened yesterday that is far more subtle, but perhaps more intensely nefarious.  Pope Francis Bergoglio announced that an Armenian theologian from the Tenth Century, Gregory of Narek, is going to be named a Doctor of the Universal Church.

Yawn.  Snooze.  So what?  Booooooring.  Whatever.

Gregory of Narek, while certainly a very holy man, was outside of communion with Rome, and also was a heretic, namely a Miaphysitite.

Yawn.  Snooze.  So what?  Booooooring.  Technical.  Whatever.

No, not whatever.  Miaphysitism holds that Christ has only one nature, which contains both a divine “character” and a human “character”.  Miaphysitism is the heresy held by what are referred to today as the “Oriental Orthodox” churches, which includes among others the Armenians and also the Copts in Egypt.

This is wrong.  Christ is One Person with two natures: divine and human.  Jesus Christ is FULLY GOD and FULLY MAN.  This truth, given to the Church by the Holy Spirit at the Council of Chalcedon in ARSH 451, is technically referred to by Christological theologians as Dyophysitism. Recalling the post earlier this month about Extra Ecclesiam Nulla Salus, and logic, we must remind ourselves, as products of a diabolic system of post-Christian contra-education, that two contradictory premises cannot both be true.  Period.  And if we do in fact believe in the One, Holy, Catholic and Apostolic Church, then we KNOW and CANNOT DOUBT what the truth is in this case.  The Church teaches infallibly that Dyophysitism is TRUE and everything else, including Miaphysitism is false, and thus heretical. Period.  Full stop.  End of story.

Now here is the point, which is nuanced, especially to the post-modern, post-Christian mind of western man, so stay with me.

While there have been and are holy people in these “Oriental Orthodox” churches, and let us certainly put at the head of that list for purposes of this explanation both Gregory of Narek AND the 21 Coptic martyrs who died on the Libyan beach just last week with the Most Holy Name of Jesus on their lips, we cannot permit sentimentality to subvert truth.  As Dr. John Senior put it so eloquently and prophetically in his ARSH 1978 masterwork “The Death of Christian Culture”:

Sentimentalism is not just a weakness, and is certainly not a virtue – it is confused with mercy – but a crime; and vicious sentimentalism is ordinary sentimentality raised up in place of principle.  It is, as I said, poisoning the wells.

Sentimentalism, as the constitutive parts of the word imply, is the subjugation of the “mental” to the “sentient”.  It is an attempt to found a philosophy on feeling.

As a friend said to me a while ago, and it struck me particularly hard and has remained in the forefront of my mind ever since, “The First Commandment is FIRST, and the Sixth Commandment is SIXTH for a reason.  It is a far more serious and grave thing to be wrong, or to teach error, about WHO GOD IS than it is to fornicate.”

I was very grateful for this bit of wisdom, because it is so easy to get tunnel vision and start to become totally fixated on the Sixth Commandment to the exclusion of everything else.  And this, I think, just may be what satan is trying to prey upon.  Gregory of Narek was wrong about the Nature of Christ.  He was wrong about WHO GOD IS.  To call Gregory of Narek a “Doctor of the Universal Church” – a monumentally high standard – is an incredibly subtle, backhanded way of saying that it is okay TO BE WRONG ABOUT WHO GOD IS.  That is to say, it is okay to break the First Commandment, that it doesn’t really matter WHO GOD IS, and that the efforts and labor of the Church, espoused to and protected by the Holy Spirit, to bring forth the infallible truth, taught infallibly by the Magisterium for over 1500 years about WHO GOD IS, is either

because it has to be one of those three. Sound familiar?  This is exactly what it seems Francis and his cabal are trying to do with the Sixth Commandment.  And the First Commandment is, at its core, more important than the Sixth.  Therefore, in the big picture, this putative naming of Gregory of Narek as a Doctor of the Church, is actually worse.

Sadly, the excellent blog Rorate Caeli has printed a piece on this matter that seems to ratify the action, and justifies it by making the wholly erroneous claim that “one cannot always speak straightforwardly of ‘schism’ and ‘heresy’ when dealing with the theological and ecclesiastical divisions of Christendom in that era.”

Oh yes.  Yes we can.  The Council of Chalcedon in ARSH 451 laid down the Church’s infallible teaching on this point, and appealing to mere political machinations as some sort of dispensation or justification for heresy is EXACTLY the sort of worldliness that the Enemy is so delighted to see come spewing from the Vatican, and especially from Pope Francis Bergoglio today.

To end on a positive note, here is a photoshopped version of the icon of Christ Pantocrator – the best icon ever – which I posted immediately below in the “Starting Tuesday Off Right: First Commandment Edition”.  The Cristos Pantocrator icon conveys the truth of Dyophysitism (Our Lord is One Person with two natures – divine and human).  Look at the two sides of His face.  They are quite different.  Entire volumes could be written about this image, but for the purposes of this essay, let us just say that this icon communicates the two distinct natures of Christ, divine and human, dwelling in the One Person of Christ. 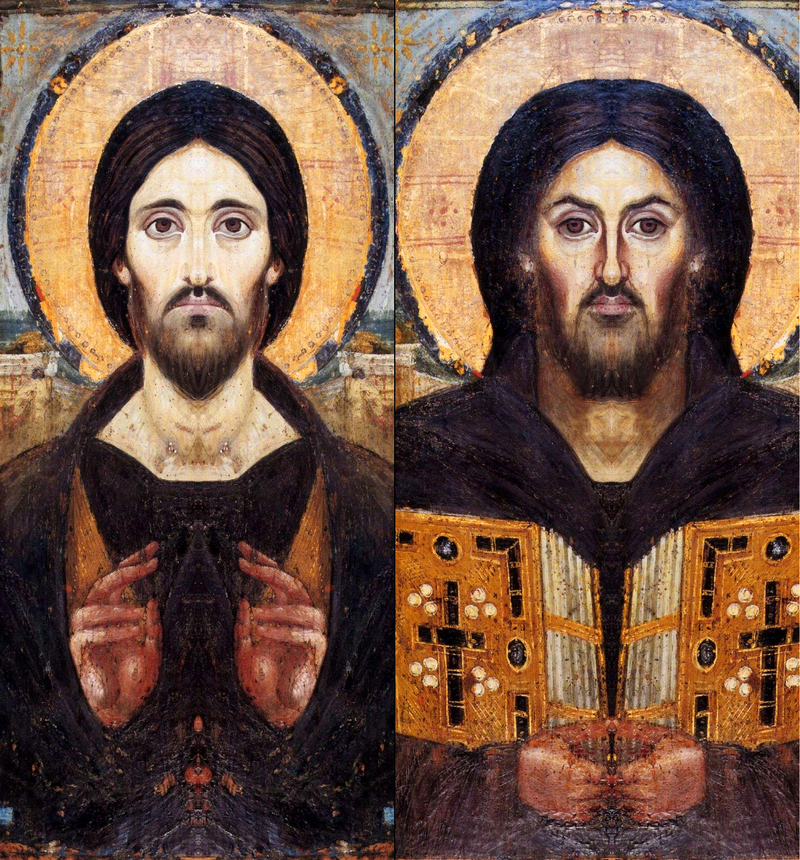 The Confession of Chalcedon:

We, then, following the holy Fathers, all with one consent, teach people to confess one and the same Son, our Lord Jesus Christ, the same perfect in Godhead and also perfect in manhood; truly God and truly man, of a reasonable [rational] soul and body; consubstantial [co-essential] with the Father according to the Godhead, and consubstantial with us according to the Manhood; in all things like unto us, without sin; begotten before all ages of the Father according to the Godhead, and in these latter days, for us and for our salvation, born of the Virgin Mary, the Mother of God, according to the Manhood; one and the same Christ, Son, Lord, only begotten, to be acknowledged in two natures, inconfusedly, unchangeably, indivisibly, inseparably; (ἐν δύο φύσεσιν ἀσυγχύτως, ἀτρέπτως, ἀδιαιρέτως, ἀχωρίστως – in duabus naturis inconfuse, immutabiliter, indivise, inseparabiliter) the distinction of natures being by no means taken away by the union, but rather the property of each nature being preserved, and concurring in one Person (prosopon) and one Subsistence (hypostasis), not parted or divided into two persons, but one and the same Son, and only begotten God (μονογενῆ Θεόν), the Word, the Lord Jesus Christ; as the prophets from the beginning [have declared] concerning Him, and the Lord Jesus Christ Himself has taught us, and the Creed of the holy Fathers has handed down to us.