1.  Thanks to one and all for getting the recurring donations on PayPal cancelled.  I have been researching alternatives and I gotta tell you, all of the PayPal alternatives that I have come across so far are, shall we say, just slightly unsavory.  Gambling, pornography, drugs, and the Caliphate seem to be the customer base.  Um, no thanks.  I haven’t come this far to crawl into bed with the likes of that.  So, for the time being, the best bet is still FRNs (Federal Reserve Notes, aka cash money) to the mailbox on the Contact page.

God will provide, or not.  If it is His will that I literally live in a van, or under a bridge, or in a train station, then so be it.  But, I have rent paid through the end of April, and I have cash-in-hand savings which I can tap for day-to-day expenses.  I have prayed all along in this that whatever donations come be just the right amount – not too much and not too little.  I also pray that if I am all wrong in this and that you folks are not my benefactors, but rather my victims, that you be delivered from my victimization of you.  But I know it can’t be completely bad because of the Masses that are being offered for you.  It is said that one Mass offered for a person while they are yet alive is one thousand times more efficacious than a Mass offered for the dead.  I don’t know for certain if that is true, but I operate on the assumption that it is.  It has at least some truth, as those in Purgatory will reach the Beatific Vision eventually – the result is locked-in.  The question of heaven or hell is still open while we are yet alive.  St. John, in particular, wrote a lot about people “falling away”.  The fruit of the Fifth Sorrowful Mystery (Our Lord’s Crucifixion and Death) is perseverance.  But I don’t want you folks to merely get to heaven.  No, I want y’all to have really good seats – super-close to Our Lord.  I’m greedy like that.

2.  A quick word to the priest readers, if I may.  I hear CONSTANTLY as an excuse for “laying low” and “keeping one’s head down” the following:  “If I rock the boat, I will get exiled and shipped off to Darkest Outer Nowhere.”  Um, yeah.  Has it ever occurred to you that there are HUMAN SOULS in Darkest Outer Nowhere who a.) Our Lord created the universe for so that those human souls, as individuals, might exist, be saved, and be happy with Him forever in heaven, and that He would suffer the entirety of His Passion repeatedly for those people, as individuals, who just happen to live in Darkest Outer Nowhere?  Has it occurred to you that maybe one little old lady in Darkest Outer Nowhere has been begging Our Lord for the last 45 years to send a good and holy priest who will Offer the Holy Sacrifice of the Mass in the Traditional Rite, and that maybe that priest, chosen to answer those prayers, is YOU?  And b.) that the efficacy of your offering of the Holy Sacrifice is not tied to the worldly attractiveness of the culture you currently reside in and are so afraid to be exiled from?  Or that the efficacy of the Holy Sacrifice is not a function of how many lay people are in attendance?

Take it from me, just because something feels unpleasant to YOU does not mean that it is, by definition, bad, or not God’s will.  Sometimes it is precisely what feels awful to US that is what is best for EVERYONE ELSE.  Has that ever occurred to you?  Probably not.  Let me say it again:

Sometimes that which feels awful to us as individuals is what is best for EVERYONE ELSE, and is God’s will.

In short, get over yourself, do the right thing, and trust in God, no matter what the cost.

3.  There are two ways for a person to allow themselves to be fooled: 1.) believe lies 2.) refuse to believe truth

4.  I received several emails from folks in Denver who knew exactly the set of horrific post-modernist, let’s-wallow-in-ugliness-as-proof-of-our-superior-modernist-enlightenment stained glass windows that I made mention of in the “Windows and Weiners” post.  They are working on achieving infamy.  Well, sure enough, a breathless announcement came across the transom that those very windows have been given an award for excellence in religious architecture.  So, being the monumental cynic that I am, I sought out the website for these awards, knowing – just KNOWING – that the previous winners were going to be, shall we say, not exactly conforming to the Thomistic criteria of beauty, nor to the Borromean guidelines for architecture.  And I gotta tell you, that even in my profound, profound cynicism, even I was shocked at the horror, the HORROR, of what I saw.

Here is the link to the slideshow of the 2013 “award winners”.  I warn you, most of this stuff is SOUL KILLING.  But then, that’s the intention, isn’t it?  Calling “evil”, “good”; calling “lies”, “truth”; calling “indifference”, “love”; calling “permissiveness”, “mercy”; and calling “ugliness”, “beauty”.  Satan is the father of all lies, and satan’s one goal that every one of his lies is driven toward and serves is to destroy as many human souls as he can.  And we play along with this because we want to be esteemed by the world.  We want to “fit in”.  Bottom line:  if these people give you an award, you need to examine your conscience.

And it also occurred to me that this false aesthetic is highly correlated to both the Marxist paradigm (ever seen Communist or Fascist architecture?  Yeah.  Soul killing…) AND is also highly correlated to institutions that have been infected by sodomites and feminists.  Look at all of the designer clothing houses, which have been ruled by sodomites and their “hags” for decades.  They clearly despise authentic feminine beauty.  Those clothes, and the models who wear them, are today, by and large, horrifically, horrifically ugly.  And yet moral cripples the world over line up to pay exorbitant prices for the privilege to don these garments and publicly wallow in their ugliness.  But, this was all prophesied.  It’s scriptural.  I just pray that some beauty survives and that they don’t destroy everything. 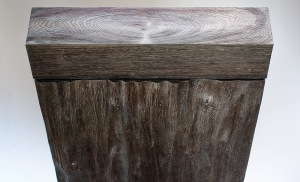 This is supposed to be a Tabernacle, where the Physical Substance of Our Blessed Lord is reposed. 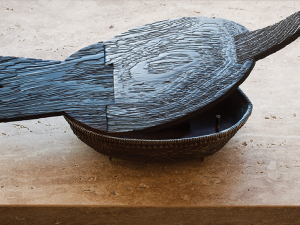 This is also supposed to be a Tabernacle. They luxuriate in mocking Our Lord by reposing Him in the ugliest possible abode. They think it makes them cool. 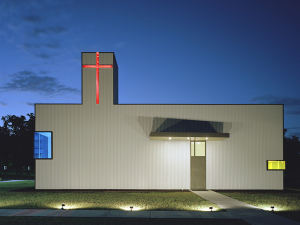 This appears to be a shipping container with a neon cross affixed to it – or that is what they were going for. Because the House of The Lord should be as ugly as possible and cause sadness and despair in the hearts of those who see it, according to the enemies of God. 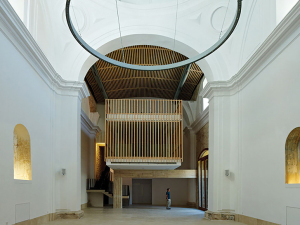 This is particularly evil – a wreckovation of a 16th century chapel in Spain. They tore out everything beautiful and installed horrific, jarring ugliness in its place.

4.  Well, let’s end on an upbeat with a song.  A pop tune, no less!  As you all recall, I have always said that the best secular songs are those that COULD be heard as either God singing to man, or man singing to God.  This one fits the bill as God singing to man.  “Look into your heart pretty baby, is it aching with some nameless need?”  Very St. Augustine.  I like it.  Always have.  “Roll To Me” by Del Amitri.

Look around your world, pretty baby
Is it everything you’d hoped it’d be?
The wrong guy, the wrong situation
The right time to roll to Me
Roll to Me

And look into your heart, pretty baby
Is it aching with some nameless need?
Is there something wrong and you can’t put your finger on it
Right then, roll to Me

And I don’t think I have ever seen
A soul so in despair
So if you want to talk the night through
Guess Who will be there?

And I don’t think I have ever seen
A soul so in despair
So if you want to talk the night through
Guess Who will be there?