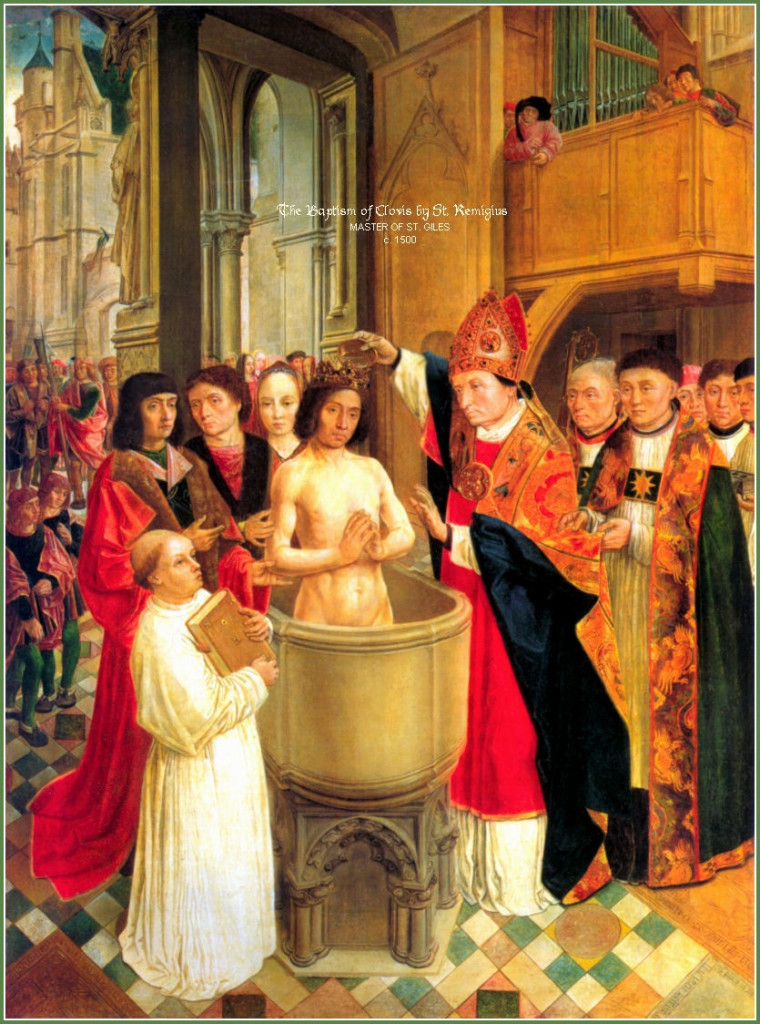 Clovis, king of all northern Gaul (France), was himself yet a pagan, though not unfriendly to the Church. He had married St. Clotildis, daughter of the Christian king of Burgundians, Chilperic, and she made repeated attempts to convert her husband. In 496, the Alemanni crossed the Rhine and the Franks marched out to drive them back. One account says that St. Clotildis had said to Clovis in taking leave, “My lord, to be victorious invoke the God of the Christians. If you call on Him with confidence, nothing can resist you”; and that the wary Clovis had promised that he would be a Christian if he were victorious. The battle was going badly against him when the king, either reminded of these words or moved by desperation, shouted to the heavens, “O Christ, Whom Clotildis invokes as Son of the Living God, I implore Thy help! I have called upon my gods, and they have no power. I therefore call on Thee. I believe in Thee! Deliver me from my enemies and I will be Baptized in Thy name!” The Franks rallied and turned the tide of battle; the Alemanni were overcome.

Queen St. Clotildis was not trusting to any enthusiasm of victory, and sent for St. Remigius, telling him to touch the heart of the king while he was well disposed. When Clovis saw her he cried out, “Clovis has vanquished the Alemanni and you have triumphed over Clovis. What you have so much at heart is done.” The queen answered, “To the God of hosts is the glory of both these triumphs due.” Clovis suggested that perhaps the people would not be willing to forsake their gods, but said he would speak to them according to the bishop’s instructions. He assembled the chiefs and warriors, but they prevented his speaking, and cried out, “We abjure mortal gods, and are ready to follow the immortal God whom Remigius preaches.” St. Remigius and St. Vedast therefore instructed and prepared them for Baptism. To strike the senses of barbarous people and impress their minds, Queen Clotildis took care that the streets from the palace to the church should be adorned with hangings, and that the church and baptistery should be lighted with a great number of candles and scented with incense. The catechumens marched in procession, carrying crosses, and singing the litany; St. Remigius conducted the king by the hand, followed by the queen and the people. At the font the bishop is said to have addressed Clovis in words that are memorable, if not actually pronounced: “Humble yourself, Sicambrian! Worship what you have burned, and burn what you have worshipped!” Words which may be emphatically addressed to every penitent, to express the change of heart and conduct that is required of him.

St. Remigius afterwards Baptized the king’s two sisters and three thousand men of his army, as well as women and children, with the help of the other bishops and priests present.