1.  Pork tenderloin, mozzarella cheese (the wet kind, not the dry pizza kind), sun dried tomatoes, mayonnaise and a little bit of sweet pickle relish.  On a nice, crusty bread.  That’s a good sammich.  It’s even better with a beer.

2.  On the topic of food.  Look, I am probably going to die a horrific, unnatural death in the upcoming war, and therefore I am going to eat whatever the heck I want, just making sure that I don’t get fat.  So spare me all emails about the carbs in the bread (mmm… bread) and the soybean oil in the mayo and all other dietary advice.  Not only do I NOT want to live forever, I’m planning on dying young.  And I’m still a size 4, and my quads are still cut.  I’ve known plenty of people who obsessed about food, and blew fortunes that they didn’t have on bee-ess “organic” (one of the bigger scams of the last quarter century, by the way), and you know what?  They were all total hypochondriacs and, most importantly, complete ingrates.  So yes, I’d love a sammich, and yes, I’d love extra mayo, and I’ll be thinking, “Thank you, Jesus” before, during and after.  Burn more than you consume (do calisthenics) and live while you’re alive.  And when you bring out the Hellman’s you bring out the best.

3.  Thank you for all of the very kind and moving feedback.  I especially appreciated hearing from those of you who were received into the Church at the Easter Vigil this year.  Welcome to the meat grinder o’ love. After you get used to it, it sorta feels like a massage.  An excruciatingly painful massage involving a meat grinder, but a massage.  It is okay to scream in pain every once and a while, but try to relax into it.  I used to get sports massages to help undo the weightlifting/CrossFit adhesions and trigger points that would rack up.  It was always extremely amusing to hear the massage lady say, “Um, I’m not sure how to tell you this, but you’re carrying the stress of a small city in your traps and neck.”  NOOOOOO.  YOU DON’T SAY.  WHATARYA TOKKIN’ ABOUT???

I read Ann Barnhardt last night, and I got all mad and then made a frowny-face, and then I even went the extra mile of spamming the link to her essay to all of my contacts, 99% of which will never read it, and 100% of which will think I’m nuts, so I totally did something, and everything’s gonna be fine, Obama’s gonna be totally impeachededed, and Morning in America and Market-priced Unicorn Farts and the New Springtime is just around the corner.  Either that or the Rapture. 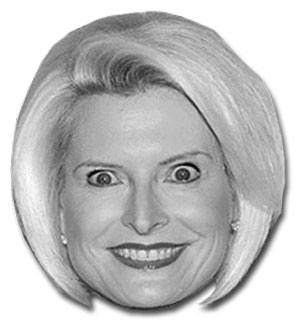 5.  So what is going to change?  I’m not sure.  I still have no idea.  The only thing I know for sure is that there WILL be more cowbell.

6.  And here, for the first time in a “mainstream” media source, is reportage of the fact that the Taliban have been armed by the Obama/Clinton machine through Benghazi with stingers and MANPADs, which have been and will continue to be used against the poor guys who have found themselves unwittingly in the military wing of the Iniquitous Gutter Kleptarchy that flies this flag:

The flag of the Iniquitous Gutter Kleptarchy. This same design USED to be the flag of the United States of America, before it was overthrown.

Now, let’s go through and list the true premises vis-a-vis the Obama regime that NY Post still refuses to acknowledge:

A.) The Obama regime is the explicit, sworn enemy of the former United States and is at war with it.
B.) The Obama regime is explicitly allied with islam as both political systems seek to create a super-rich tyrannical oligarchy over a massive, destitute underclass.
C.) The Libyan incursion and establishment of a beachhead and depot there in March of ARSH 2011 was done specifically to arm muslims throughout Africa and Asia, and eventually Europe, who would overthrow secular governments and advance the reforming of the Caliphate, as well as fight against and kill US military.  The Taliban being armed with these munitions isn’t a “backfire” or a bug, it’s a feature and the original goal.
D.) The Obama regime is happy to see highly-skilled elite forces, such as SEALS, Rangers and Marines killed because they know and fear that such men MAY ultimately be counter-revolutionary and/or junta risks.  Remember the “SEAL Team 6” massacre of 30 of the US’s top fighting men, packed, against protocol, into a mere National Guard cargo Chinook, and delivered on a platter for the kill by the Taliban, five months after the Libyan weapons depot was established.
E.) The Obama regime looks forward to the inevitable use of stingers and MANPADS against passenger jets – because that’s precisely what MANPADs are designed for –  and will use the terror and “crisis” to expand its power.
F.) The Obama regime never had any expectation that the released Taliban 5 from Gitmo would do anything but be immediately freed to return to the front.  They were released because the Obama regime is allied with and deeply sympathetic to the musloid political system.

I think that probably covers the above NY Post piece.  Only when you operate under the previous TRUE premises can TRUE conclusions be reached.  If you start with a false premise, the truth table is utterly corrupted, and thus all output flowing from said truth table will be false.  If you take the latest Fields Medal-winning mathematical dissertation and begin with the premise that 0=1, you can still run all of the equations… it’s just that the results will be utter, complete gibberish.  And if you try to use that gibberish in an applied field, like physics, your structure will collapse and everyone in it will die, because REALITY ALWAYS WINS.