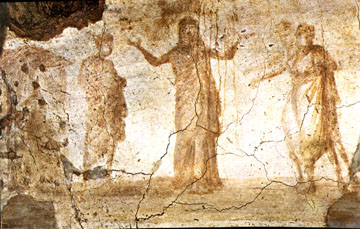 Susanna (in the middle) and the two dirty old men lusting after her (pointing at her nether bits)  from the catacomb of Priscilla in Rome from the second-half of the second century. For those of you in Yorba Linda, that is within the years ARSH 150-199, so, you know, totally modern.

Today’s epistle for the Mass of the Saturday of the Third Week of Lent is the story of Susanna, which comprises the entirety of Daniel 13.  WHAAAAAT?  Daniel THIRTEEN?  Every good Wednesday-night-Bible-studier worth his salt knows that Daniel only has TWELVE books, Ann.

Well, not if you count the chapters that Herr Psychopath (Luther) edited out.  D’oh!  Poor Susanna got caught in the heretical crossfire as Luther had to toss her out with the rest of the Deuterocanon (books and passages found in Greek, not Hebrew), which he didn’t like because they refuted many of his heresies.

Short version:  Pretty girl goes into a garden.  Two dirty old men see her and want to have sex with her.  They approach her and tell her that if she doesn’t have sex with them, they will accuse her of crimes carrying the death sentence.  Realizing she can’t win, she chooses to stay faithful to God and His Law, do the right thing, and take whatever injustice comes.  The dirty old men then accuse her of trysting with a young man.  Susanna is hauled into court, facing the death penalty for fornication with two elderly male witnesses against her.  Enter the young prophet Daniel.  Daniel, inspired by the Holy Spirit, calls bee-ess and separates the two dirty old men.  He then asks each which tree in the garden he saw Susanna trysting beneath, and they contradict each other.  Daniel says, “Yup.  Thought so.”  The two dirty old men are then executed for bearing false witness.  Susanna’s name is cleared, Daniel is established as a prophet, and Susanna’s parents say, “YAY!!”

This is an evergreen story and lesson, and many people face situations like this at some point or another in their lives.  In fact, it happened to me several years ago.  Ah, well.  That’s a story for another day.

In fact, I would say that all Christians in the Iniquitous Gutter Republic (and so many other post-Christian nations) are facing similar situations right now – we must either remain faithful to God’s law and be prepared to suffer martyrdom up to death, or apostatize by our consent to crimes against God.  I mentioned that I was supplementing my assistance at the Holy Sacrifice of the Mass every day with Dom Propter Gueranger’s commentary.  Here is his concluding paragraph on this reading, and tell me that this doesn’t speak directly to us today – particularly to the wicked, wicked clergy who are all chomping at the bit to “normalize” both divorce and remarriage and also sodomy for the sake of being popular amongst the wicked pagans.  Emphases mine:

“In this history of Susanna the early Christians saw a figure of the Church, which, in their time, was solicited by the pagans to evil, but remained faithful to her Divine Spouse, even though death was the punishment for her resistance.  The carvings on the ancient Christian tombs, and the frescoes of the Roman catacombs, represent this history of Susanna’s fidelity to God’s law in spite of the death that threatened her, as a type of the martyrs preferring death to apostasy; for apostasy, in the language of the sacred Scriptures, is called adultery, which the soul is guilty of by denying her God, to who she espoused herself when she received Baptism.”

St. Susanna and all Holy Martyrs, pray for us!