1.  Thanks to one and all who emailed me to point out that the Corzine Mass on March 19th will be said, in fact, on the Feast of St. Joseph.  Indeed.  In my haste and enthusiasm I glazed right over that.  BUT, it brings up a great point.  One should, especially during Lent, be sure to read the Masses of the day in addition to the Masses of the Feasts.  The Lenten Masses are incredibly rich.  This is the St. Andrew Missal in Latin (of course) and English side-by-side.

2.  I have also begun supplementing my daily Mass with Dom Propter Gueranger’s “Liturgical Year” commentary.  A veritable treasure trove.  I shall be shamelessly lifting from it regularly.

Ann,
I found it exceedingly odd today in church to be praying for Corzine.  Never thought that would happen. [I know, right?]
Then again, never thought I would cancel my cable but I did that 15 months ago.  [Woot!] Haven’t missed it….thought I would as I have always enjoyed watching sports. [Toldya.]  But instead our family plays games, have Bible studies, talk about stuff important to teens etc.
I thought the kids would be resistant to losing cable, but they haven’t been. [Good kids.  You should keep them.]  In fact they seem well adjusted and happy that their parents are focused on God and family. [Not according to the FEDGOV.  To them you are abusing your children by isolating them and indoctrinating them with religious extremism. Just so you know.]  What a concept, eh?  [Crazypants.]
Keep up the good fight. [That’s the plan, Stan.]
A

4.  I get lots and lots of requests from people who want me to write more about my conversion.  It’s mostly boring – just lots of reading and thinking.  But something did occur to me a while back which I found interesting.  I have been, for most of my life, physically surrounded in a sense by the Eucharist.  When I was a kid I lived in an old house which was converted into apartments, which used to be a Catholic orphanage for black boys run by the Oblate Sisters of Providence, an order of black nuns.  I remember people saying that they were EXTREMELY striking in appearance in their wimples and habits.  I found a picture: 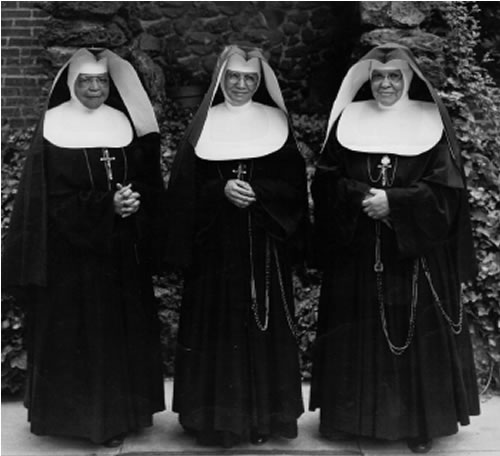 Back in the Good Old Days before Vatican II when nuns were actually Catholic.

Anywho, I also remember it being said that there was a chapel in the orphanage – which stands perfectly to reason.  So, knowing as we do that God is not limited by time, I was, for most of my childhood, not far from where the Holy Sacrifice of the Mass had been offered, and maybe even where the Eucharist had been reposed.  So that is the “backward in time” aspect.

For the “forward in time” aspect, there is the public elementary school I attended.  A couple of years ago it was bought by the local Catholic School system and the library was turned into a chapel. I spent a lot of time in that library.  I was well ahead of my classmates and operated on a largely different curriculum from the rest of my class until I was skipped for the first time from the 4th grade to the 5th grade.  When I was in 1st grade, my teacher, a British lady by the name of Mrs. Hanna, would send me to the library to write research reports on various topics.  The first one she tasked me with was the story of Achilles from the Iliad.  I thus learned how to use the encyclopedia and card catalogue.  Sadly, that was my last encounter with the classics, aside from a pedagogical death march through Antigone in the 10th grade.  Ah well.  Divine Providence.  Anyway, I was sent off to work independently in the library a lot through those years.  The future chapel.

I had one remarkable physical encounter with Our Lord in the Eucharist in my childhood.  The Sunday school class I was in at the United Church of (we don’t actually believe in) Christ went on two “ecumenical” field trips when I was about ten or eleven years old.  The first was to a synagogue in Kansas City.  The Torah scrolls were kept in a very big thing on the wall and there was a big production when they were brought out.  Very Vegas.  I remember being very underwhelmed and thinking “nothing just happened here.”  Little did I know how true that was.

Anyway, the second “ecumenical” field trip was to a local Catholic parish on a Saturday night.  We attended the Mass and then were given a tour by the priest after the Mass.  I saw my second grade teacher at the Mass and had the standard “Wow.  Teachers actually exist outside of the school?” reaction that children typically have.  I was also thoroughly off-put by the fact that everyone was in jeans.  My lands, even at the United Church of (we don’t actually believe in) Christ, everyone wore “Sunday clothes” to church.

After the Mass, we had our tour, and the priest took us up ON THE ALTAR and OPENED THE TABERNACLE, took out the ciborium, and showed us the Reserved Hosts therein.  I remember him specifically saying, “Most Catholics never get this close or get to see this.” And yes, I specifically remember him genuflecting before and after and thinking to myself, “Huh.  Why did he do that?”  What he never mentioned was that the Eucharist, those little round discs that we peered at in that gold cup thing with the lid, were the PHYSICAL SUBSTANCE OF GOD ALMIGHTY.  Yeah.  It’s just all so embarrassing.  I mean, that group of four girls might have thought he was crazy, so he couldn’t just TELL US THAT because we might have thought less of him for holding such wacky beliefs.  And, as I said in the post below, it’s all a popularity contest.  That’s the best case scenario, because that assumes that he actually believed in the Eucharist at all.  At any rate, I tremble with awe now thinking back on that episode.

So there you go.  Remember, religion – and there is only one True Religion – is not man’s quest for God.  Religion is God’s quest for man, reaching out over and bridging the chasm of sin that separated us – and that is why it can only be done properly on His terms.  He is the Actor.  Whether or not you “FEEEEEL” or even perceive Him acting upon you is a completely and totally unreliable metric.  This is the lie of Superfun Rockband church and also the Novus Ordo cultural paradigm which is trying to emulate Superfun Rockband church – that the efficacy of the sacrament, or “value of the experience”, is measured by the feeling and perception of the individual.  This is utter and complete narcissistic, self-worshiping rubbish.

Thankfully, He is irresistible, and here I now sit in the Sweet Meatgrinder of Love.  It was a little scary at first, but once you get used to being put through a meatgrinder, it’s FANTASTIC.  Crank it, Baby!  I’m still too chunky!