(A letter just in from a longtime cattleman friend.  MF Global is NOT in the rearview mirror.  The cascading consequences of the theft cannot be quantified, are still ongoing, and will be for a very, very long time.)

You may recall that my local Co-op got caught up in the MF Global scandal.  That of course led to a HUGE loss of money, which in turn led to a series of bad decisions by the General Manager, such as no overtime hours for employees, and not blowing air on grain that came in during harvest, all in order to cut costs and save money to make up for the millions they had stolen.  Makes sense right?  Well they ended up with a bunch of rotten grain, and are still obligated to pay the farmers for it.  So, that co-op, which is not small by any means, finally announced to their employees yesterday that they have reached a deal to sell out to the mega co-op in our area.  Come September 1 we will have a monopoly here.  The mega co-op will now have all of the grain business around, unless one is willing to truck grain more than 45 miles to an ethanol plant or to AGP or Cargill.  Just the windshield time alone for us will be over an hour one way due to traffic and stop lights. No telling how long will have to sit in line when we get there.  There are just a few small mom-and-pop type fertilizer/chemical places here.  There is only one other place left to get fuel.  And now the mega co-op will have all the farm tire business.

I have an account with mega co-op.  I called them for propane a few months back.  They told me that I was going to be charged a $100 drop fee, and a $50 fee per tank that I had them fill.  That gets kinda expensive in a hurry when filling multiple tanks for livestock waterers.  Plus, there was a $100 fee for short notice.  I guess three days was not enough notice.  Never mind my place sits right on the Highway and their trucks run by here all the time.  Heaven forbid they would have to turn off the pavement and drive 100 feet to fill the tank at my house!

I never thought this MF Global thing would affect me.  I was totally mistaken by that.  One competitor got wiped out because of it and now customer service will be a fond memory in this part of Nebraska.

You aksed me to tell ya how it ended up and there it is.

On a different note, I have watched most of your Cornerstone Cattle Marketing Level 1 DVD set.  [Yes, it is still for sale and I have order fulfillment elves standing by to drop ship on a 24 hour turnaround!]  So far I can tell it is WAY better than when I went to your school in person in KC.  [That school which this fellow attended in November of 2005 was the very first school I ever taught.  I opened the school by telling the class of 55 that I was very sorry, but they were attending the weakest-delivered school I would ever put on – because it was my first.]  I’m very impressed with the quality.  I thought you taped it at a school you were teaching, I had no clue it was in a television studio.  My wife has kinda been miffed at me for naming our daughter after you.  All she has ever seen is your wacky YouTube videos.  She couldn’t believe I convinced her to name her daughter after a crazy lady. [I ain’t no lady.]  After seeing parts of your cash cattle marketing DVD, and seeing the Ann I know, I think she’s getting over it. 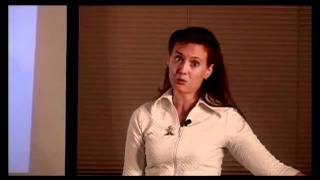 What red-blooded woman wouldn’t want her firstborn child named after THIS?