Pope Leo XIII, that is.  Here are some choice excerpts from his Encyclical SPAIENTIAE CHRISTIANAE – On Christians as Citizens, from January ARSH 1890, which was recently brought to my attention.  And boy, did it ever get my attention.

HERE IS THE LINK TO THE FULL DOCUMENT, which I cannot recommend strongly enough.  If you can, print it out and take a highlighter to it.  You might run out of highlighter ink before you get through it.  Every paragraph is a manful, crystal-clear tour de force.  Read this, and then compare it to the nebulous, wishy-washy, clear-as-mud rhetoric we get today.  When you read Leo XIII you comprehend EXACTLY what he is saying immediately.  Bam.  Pow.  Here it is.  Take it or leave it.  2+2=4.  Period.

I can’t resist posting these excerpts, because he is speaking directly to us.  “Relevant” doesn’t begin to do it justice.  All emphases are mine.

From paragraph 2, (confirming) my position that the United States no longer actually exists as a licit state:
…if, in administering public affairs, it [government] is wont to put God aside, and show no solicitude for the upholding of moral law, it deflects woefully from its right course and from the injunctions of nature; nor should it be accounted as a society or a community of men, but only as the deceitful imitation or appearance of a society.

From paragraph 4, (confirming) my position that people are responsible for both their government and for their knowledge (or lack thereof) of the faith – especially in this day and age wherein the sum of human knowledge is available instantly on the internet, to which you all obviously have access:
Considering that forthwith upon salvation being brought out for mankind, Jesus Christ laid upon His Apostles the injunction to “preach the Gospel to every creature,” He imposed, it is evident, upon all men the duty of learning thoroughly and believing what they were taught. This duty is intimately bound up with the gaining of eternal salvation: “He that believeth and is baptized shall be saved; but he that believeth not, shall be condemned.”

From paragraph 5, shooting down the false premise so commonly held today that “Render unto Caesar” implies equality of the state, or even a supremacy of the state over God and His Holy Church with regards to loyalty and earthly submission:
We are bound, then, to love dearly the country whence we have received the means of enjoyment this mortal life affords, but we have a much more urgent obligation to love, with ardent love, the Church to which we owe the life of the soul, a life that will endure forever. For fitting it is to prefer the good of the soul to the well-being of the body, inasmuch as duties toward God are of a far more hallowed character than those toward men.

From paragraphs 6, 7 and 8 speaking directly to right action when a state is in open conflict with God:
For, instances occur where the State seems to require from men as subjects one thing, and religion, from men as Christians, quite another; and this in reality without any other ground, than that the rulers of the State either hold the sacred power of the Church of no account, or endeavor to subject it to their own will. Hence arises a conflict, and an occasion, through such conflict, of virtue being put to the proof. The two powers are confronted and urge their behests in a contrary sense; to obey both is wholly impossible. No man can serve two masters, for to please the one amounts to contemning the other.

7. As to which should be preferred no one ought to balance for an instant. It is a high crime indeed to withdraw allegiance from God in order to please men, an act of consummate wickedness to break the laws of Jesus Christ, in order to yield obedience to earthly rulers, or, under pretext of keeping the civil law, to ignore the rights of the Church; “we ought to obey God rather than men.”  This answer, which of old Peter and the other Apostles were used to give the civil authorities who enjoined unrighteous things, we must, in like circumstances, give always and without hesitation. No better citizen is there, whether in time of peace or war, than the Christian who is mindful of his duty; but such a one should be ready to suffer all things, even death itself, rather than abandon the cause of God or of the Church.

8. Hence, they who blame, and call by the name of sedition, this steadfastness of attitude in the choice of duty have not rightly apprehended the force and nature of true law.

From paragraph 10 on the positive duty of civil disobedience and the false charge of sedition:
But, if the laws of the State are manifestly at variance with the divine law, containing enactments hurtful to the Church, or conveying injunctions adverse to the duties imposed by religion, or if they violate in the person of the supreme Pontiff the authority of Jesus Christ, then, truly, to resist becomes a positive duty, to obey, a crime; a crime, moreover, combined with misdemeanor against the State itself, inasmuch as every offense leveled against religion is also a sin against the State. Here anew it becomes evident how unjust is the reproach of sedition; for the obedience due to rulers and legislators is not refused, but there is a deviation from their will in those precepts only which they have no power to enjoin. Commands that are issued adversely to the honor due to God, and hence are beyond the scope of justice, must be looked upon as anything rather than laws. You are fully aware, venerable brothers, that this is the very contention of the Apostle St. Paul, who, in writing to Titus, after reminding Christians that they are “to be subject to princes and powers, and to obey at a word,” at once adds: “And to be ready to every good work.” Thereby he openly declares that, if laws of men contain injunctions contrary to the eternal law of God, it is right not to obey them.

And, for those who send me hate mail telling me that I have no right or authority to say, well, anything about anything (mostly cuckoo-pants sedevacantists who hate me because I don’t want to round up and murder every person on the planet with Jewish DNA), here ya go from paragraph 14:
But, when necessity compels, not those only who are invested with power of rule are bound to safeguard the integrity of faith, but, as St. Thomas maintains: “Each one is under obligation to show forth his faith, either to instruct and encourage others of the faithful, or to repel the attacks of unbelievers.”  To recoil before an enemy, or to keep silence when from all sides such clamors are raised against truth, is the part of a man either devoid of character or who entertains doubt as to the truth of what he professes to believe. In both cases such mode of behaving is base and is insulting to God, and both are incompatible with the salvation of mankind. This kind of conduct is profitable only to the enemies of the faith, for nothing emboldens the wicked so greatly as the lack of courage on the part of the good….Nor is there any ground for alleging that Jesus Christ, the Guardian and Champion of the Church, needs not in any manner the help of men. Power certainly is not wanting to Him, but in His loving kindness He would assign to us a share in obtaining and applying the fruits of salvation procured through His grace.

And then paragraph 16:
No one, however, must entertain the notion that private individuals are prevented from taking some active part in this duty of teaching, especially those on whom God has bestowed gifts of mind with the strong wish of rendering themselves useful. These, so often as circumstances demand, may take upon themselves, not, indeed, the office of the pastor, but the task of communicating to others what they have themselves received, becoming, as it were, living echoes of their masters in the faith. Such co-operation on the part of the laity has seemed to the Fathers of the [First] Vatican Council so opportune and fruitful of good that they thought well to invite it. “All faithful Christians, but those chiefly who are in a prominent position, or engaged in teaching, we entreat, by the compassion of Jesus Christ, and enjoin by the authority of the same God and Saviour, that they bring aid to ward off and eliminate these errors from holy Church, and contribute their zealous help in spreading abroad the light of undefiled faith.”  Let each one, therefore, bear in mind that he both can and should, so far as may be, preach the Catholic faith by the authority of his example, and by open and constant profession of the obligations it imposes. In respect, consequently, to the duties that bind us to God and the Church, it should be borne earnestly in mind that in propagating Christian truth and warding off errors the zeal of the laity should, as far as possible, be brought actively into play.

There’s more.  Just go read it and bask in the radiance of manful, intransigent faith manifested in supremely coherent and understandable prose.  Sigh. 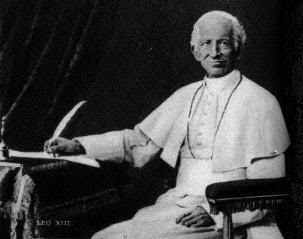