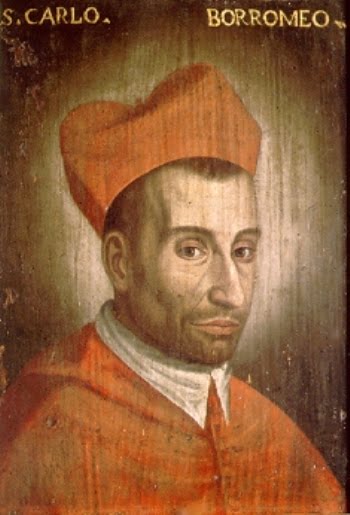 Today is the Feast of Saint Charles Borromeo. He was grumpy, and apparently was rocking a five o’clock shadow well before noon.  He was a real manly-man.  Among countless other awesome achievements, St. Charles went after his confessor when it became clear that the guy was a pervert, and the confessor was, as a result, convicted of “unnatural offenses”.  He made many enemies – but the kind of enemies that it is good to have.

St. Charles was a toughguy who saw how incredibly messed up and wicked the world in his day was, and just rolled up his sleeves and FIXED IT.  He was a man who got tremendous horsepower to the pavement.  He didn’t shrug his shoulders.  He didn’t roll his eyes.  He just mashed the throttle and went right over the top of anyone who dared slow him down.  Sigh.  Yeah.  We’re a fan.

Oh, and he wrote an entire book about the design and construction of churches: Instructiones Fabricae et Supellectilis Ecclesiasticae.  The people responsible for all of these hideously, hideously ugly churches today should be beaten mercilessly with a hardcover copy of Instructiones Fabricae et Supellectilis Ecclesiasticae until they repent of their wicked, evil designs and lying proclamation of ugliness as beauty.

And even though he was widely hated by the corruptocrats and perverts, and even though he was a grumpy-puss who consistently wore his frowny-face, the day he died the people took to the streets demanding that he be canonized a saint.  (I’m pretty sure there is a lesson in there somewhere….)