This saint joined a Crusade to Egypt in the hopes of PROSELYTIZING as many musloids as he could before being killed.  This saint was not killed, but was instead received into the court of a sultan.  Our saint then offered to engage in a trial by fire – literal fire – with the sultan’s musloid “scholars”.  Our saint offered to enter into a fire pit and if he emerged unscathed, the musloid scholars would then have to concede that the CATHOLIC GOD (the word “catholic” means “universal”, so of course God is Catholic, and of course His Church is Catholic) and not the phoney musloid god (our saint, like any intelligent person, knows that the thing called “allah” is a non-existent pagan-Bedouin moon deity concocted by the inventors of the musloid political system, inspired by satan himself) is the One, True God.  Naturally, knowing that their non-existent deity could not duplicate such a miracle, and not wanting to be burned to a crisp, the musloids declined the challenge – BUT the sultan granted our saint permission to PROSELYTIZE and win souls for Christ in his territory WHILE THIS VERY SULTAN WAS FIGHTING CRUSADERS.

Who was this saint who knew that not only was PROSELYTIZING not “solemn nonsense”, but was utterly essential and demanded by Our Lord – a direct corollary to the two Great Commandments, to love God and to love our neighbor?

Yep.  It was St. Francis of Assisi. 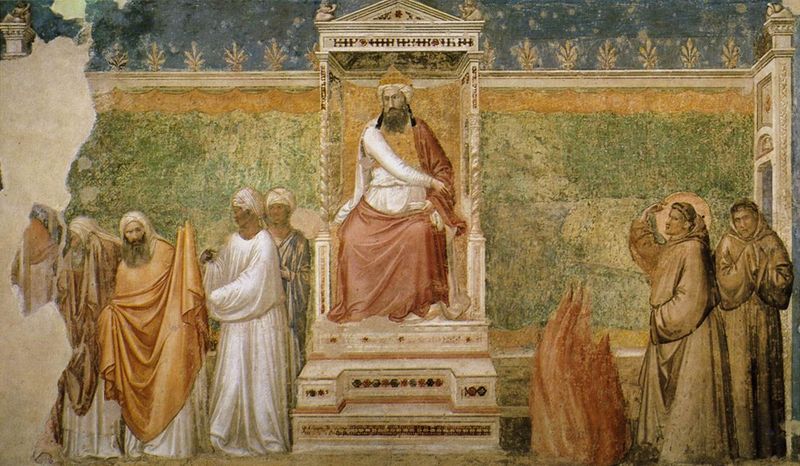 Giotto’s fresco depicting St. Francis’ Trial by Fire. The musloids are on the left, slinking away. Apparently this was all a terrible mistake on St. Francis’ part. He should have merely “encountered” the musloids in a spirit of “dialogue” and listened to their lies and then declared that they should all engage in good works and “meet each other there”. Because, you know, there isn’t a “Catholic God”, and the god the musloids believe in is the same as the Triune Godhead, or something. And God Himself being Goodness Itself, and good and evil being whatever the individual “conceives” them as being, “God” is whoever or whatever the individual says He, She or It is. Thank “god” we have Smart Francis today to correct all of the errors of Stupid Francis of Assisi.