1.  Salmagundi is a type of salad that contains a little bit of everything.

3.  Yes, I saw that the Obama regime is threatening to arrest any priest chaplain who says Mass.  Obviously, every Catholic priest chaplain should IMMEDIATLY go offer the August and Unbloody Holy Sacrifice in the most public way possible every single day and then force the Obama regime to either arrest them and physically drag them off the altar or sit down and shut up.  Fix bayonets and CHARGE!  No army ever won a war by cowering in fear.

4.  Speaking of which, here is a great reader comment on the “’78 Chryslers and Prayer” piece:

At the end of your “Mopar vs GM, Prayer” you added an addendum about the contemptative/cloistered orders.  This thought did occur to me when you mentioned that prayer isn’t the purpose, but I’ve read just enough about the lives of cloistered Saints to realize that your analogy fits them even better than us in the secular world.  Prayer is their fuel too, but the work they are doing is more sublime and more direct than what we do.  Being a military nerd and member of the Church Militant, I have taken to calling the cloistered religious the Heavy Artillery of the Church Militant.  Just look at the life of the Little Flower (St. Therese of Lisieux): her spiritual combat on behalf of missionaries was like a thousand howitzers “softening up” an enemy formation before sending in the infantry to finish the job — only more so.  Just as every Mass is a bending of space and time which summarizes all time and brings us into physical contact with Christ crucified on Calvary, so the cloistered religious, behind the walls of their monastery, do direct combat with satan and his minion without the constraints of physical space getting in their way.  There have been dramatic examples of this in history — like Blessed Mary Agreda** — but before reading your addendum I thought it was even more the case for the religious.

And what happens to a military ground force when it loses artillery or air support — or worse yet, those assets target them instead of the enemy?  That’s what we’re seeing in the Church with the loss of the monks and nuns and the perversion of the few that remain.

And now our commander-in-chief is ordering us to discard our weapons and stop fighting with our enemies…. I think the minor chastisement is upon us.

Thank you again for your writing.  You are in my family’s prayers
Regards,
M
5.  This landed in my email box this week.  This is a picture of a 10 million billion pengo “B.-Pengo” bill from 1946 Hungary. 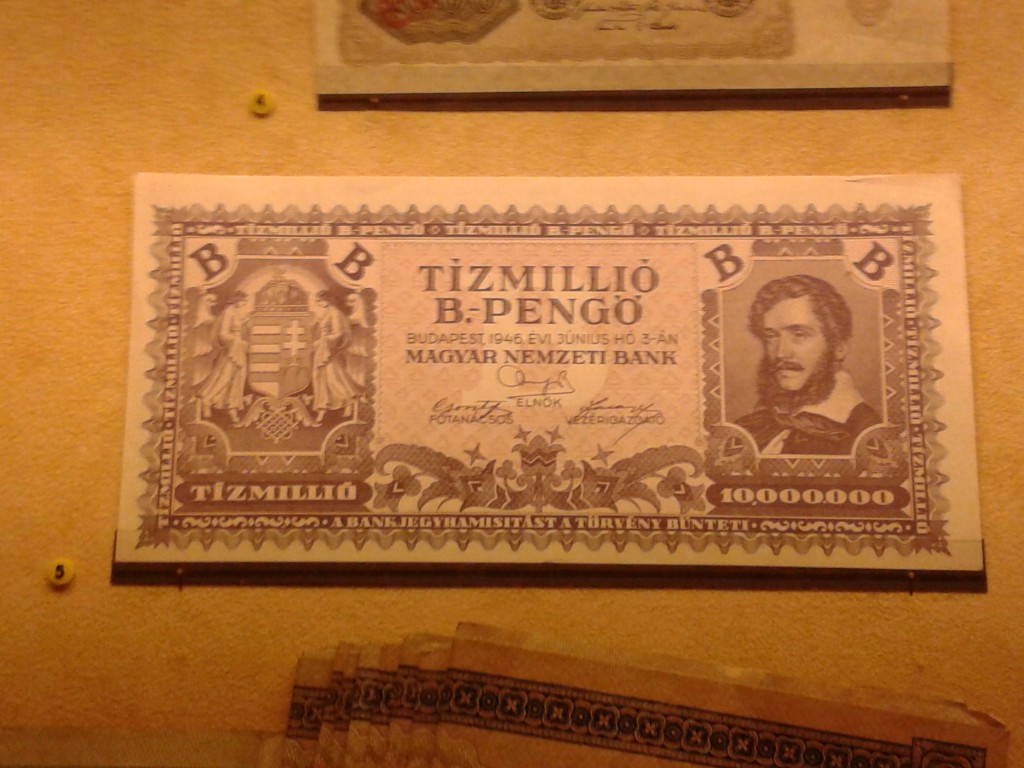 A ten quintillion Hungarian Pengo note circa 1946. Guys, the U.S. economy and debt bubble is far, far worse than anything that was going on in Hungary. The only difference is the fact that the reality of the Hungarian situation was acknowledged by the market – because that is what people USED to do: acknowledge reality.

When the Pengo was finally ditched in August 1946, the new currency, the Forint, was pegged at 400 OCTILLION Pengo.  The Forint, upon issue, had an exchange rate with the U.S. Dollar of 8.5 cents.
Not only can this happen in the U.S. and Europe, mathematics dictates that it MUST happen at some point.  But, being that the U.S. Dollar is the global reserve currency, war will break out long before we see trillion dollar bills.
Ten million-billion is ten QUINTILLION.  Stop now and think about this.  Let’s say that the average hourly wage is ten quintillion dollars.  Do you really believe that China is going to accept coupon payments on its U.S. Treasury paper in hyper-inflated dollars?  Let’s do the math.  Let’s say that china is holding $1 Trillion in U.S. debt (this is a pretty close approximation).  In the example above, their total debt – not just the coupon payment but the ENTIRE debt holding could be paid off by ONE MAN working for one ten-millionth of an hour, which is 0.00036 seconds.  That’s 36 hundred-thousandths of a second.  One man working for 36 hundred-thousandths of a second would “pay off” the entire Chinese debt.
I post this exercise to make you comprehend how utterly, utterly imbecilic the notion of inflating away debt is.  The U.S. debt WILL BE PAID IN FULL REAL VALUE, and it will be paid in manhours, blood and landmass redistribution, and it won’t matter one iota how many zeroes there are after the nominal hourly wage integer.
Bruce Jenner is a man. And furthermore I consider that islam must be destroyed.