When a shepherd would go out and search for a lost sheep that had wandered off, when he found the lost lamb, he would BREAK OR DISLOCATE ITS LEG, and then carry it back to the flock on his shoulders. This husbandry technique is called “hobbling.” We have all seen that image. Yeah. He wasn’t carrying it because it was fun. He was carrying the lamb because he had intentionally crippled it.

Why? Why break the animal’s leg? First, to keep it from wandering off again. Second, in order to train it to stay with the flock. While the leg was mending, the lamb would NOT wander off and learned to stay with the fold. This was done not just to protect the straying lamb, but also to protect the rest of the flock. Sheep are very gregarious. If one is heady and heads off on some tangent, the rest of the flock might go after it instead of staying with the shepherd.

In terms of the actual breaking of the leg, you might be thinking that a broken leg would kill an animal or be massively cruel. You would be wrong. The folks who taught me the cattle business used to herd and drive wild animals like elk and reindeer up on the tundras of Canada. One time they came across a large herd of elk and one of the animals had a fractured hind leg. The bone was totally severed and the leg was flopping completely free as the animal ran with the herd on three legs. When they came back to that herd a few weeks later, they spotted the animal, and its leg was almost fully healed. It had a slight deformity, but it was running on the broken leg. The point is that animals have a massive pain tolerance such that their perception of pain is fundamentally different than that of human pain. Additionally, they have a capacity for physical healing that humans likewise do not have. A untreated compound fracture in a human leg would kill the human. But animals are different, so the shepherding technique of breaking or dislocating the leg of a straying lamb would have been standard operating procedure.

I looked this up, and sure enough, up until just within the last century, people understood the symbolism of the Good Shepherd fairly widely, as many people were still involved in animal agriculture on roughly the same technological level as that of 2000 years ago. The Church, and thus the people understood that if God gently guides you back to the fold, but you keep persistently wandering off and being disobedient to God’s perfect will, endangering not only yourself but the rest of the flock as well, JESUS WILL PROVERBIALLY BREAK YOUR LEG, hoist you on His shoulders and haul you back to the flock. The alternative would be to let you get eaten by the wolves, and entice the wolves to attack the rest of the flock.

When Jesus Christ says, “I am the Good Shepherd,” He MEANS IT. CRACK!

Finally, this also illuminates the prophecy in Numbers 9:12 that the Passover Lamb shall not have any of its bones broken:

They shall not leave any thing thereof until morning, a nor break a bone thereof, they shall observe all the ceremonies of the phase. –Numbers 9:12

This was specifically emphasized by John in his Gospel:

For these things were done, that the scripture might be fulfilled: You shall not break a bone of Him. –John 19:36

Jesus Christ is the Lamb of God (Agnus Dei), slain for the sins of the world (Qui tollis peccata mundi). He was slain without any of His bones being broken because He is the prefect Lamb, in perfect union with the Will of the Father, Who never, ever strayed, and thus His bones, in particular His legs, were not broken.

If you remember the narrative from Calvary, when Jesus had died on the Cross, the Romans, spurred by an earthquake and the desire to get the three crucified Jews off of Golgotha before the beginning of the Passover (also prophesied in Numbers 9:12 – “They shall not leave any thing thereof until morning”), were ordered to break the legs of the three men in order to hasten death. If their legs were broken, they couldn’t hold themselves up on their crosses to breathe, and would thus asphyxiate in a matter of minutes. The two thieves had their legs broken with a cudgel by the Romans. When the Roman came to Christ, he saw that Our Lord was already dead. In order to make sure that Jesus was dead, the Roman, Longinus, took a spear and stabbed Jesus in His side, through to His Heart. This pierced the pericardial sac of water that had formed around His Heart as He went into shock and asphyxiated. Out of Jesus’ side poured first water (Baptism) followed by Blood (The Eucharist). So, while the good thief and the bad thief both had their legs broken, Jesus’ legs were NOT broken at the last second because He is the perfectly submissive Lamb to the Will of the Father.

Again, this symbolism would have been obvious to previous generations. It is only today that it has been lost. Beware of any clergy today who try to paint Jesus as utterly benign, effette and passive. He is anything but. Jesus will BREAK OUR LEG if that is what is required to get us safely to heaven and save us from the wolves. Priests and bishops would do very, very well to heed this example. The fact that there have been no excommunications in the wake of the pro-abort culture in government, especially now among such “c”atholics as Kathleen Sebilius, Nancy Pelosi, John Kerry, Joe Biden and every member of the Kennedy clan is a testimony to the utterly piss-poor job of shepherding that today’s episcopacy is doing. UTTERLY. PISS. POOR.

For the love of God, and in the name of Christ the Good Shepherd, BREAK SOME LEGS! CRACK!

(Isn’t this image incredibly moving now that we know the full story and context?) 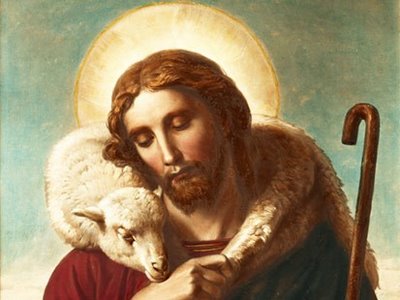