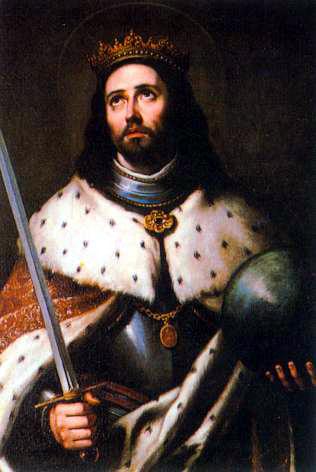 I’m going back-to-back with King St. Ferdinand III. I post this pic because of the look on his face. The look says it all. I also found this edifying little tidbit:

On the day Saint Fernando became a knight, he prayed:

†Christ, my Lord, I am in Thy hands, the same way this sword is in mine. Show me, my King, what Thou wantest of this Thy knight.†

In the silence and stillness of the night, St Fernando heard Christ answer him:

†I want to make your whole life like a representation and marvelous parable so that the coming centuries may contemplate the war that I, Eternal King and Universal Lord, wage against the powers of darkness, to conquer the entire earth for my Father. Fernando, you will be the noble and considerate king who leads his vassals in this great enterprise, the courageous and mortified King who, above all others, charges ahead in the midst of danger and endures the strain of hard work and the fatigue of battle. You will be the generous and magnanimous King who in victory does not worry about his treasures, but distributes the spoils among his faithful knights.†

God granted to Saint Fernando to see the stark outline of the life that was to be his, a life full of struggles and hardships and warfare. Yet his soul did not quake at the prospect, for he knew that he would be doing God†s will, and that God would be with him as long as he remained true. He was prepared to do whatever was required of him now, and all the days of his life.

King Saint Fernando became one of history†s most gifted and formidable warriors, while being at the same time one of the greatest monarchs who ever ruled. He, like so many men of his time, did not seek to enjoy a long life so much as he sought to live a good life. Thus, he spent his entire life in the service of God, rather than wasting his time in service to himself.

King St Fernando was a man of clear and deep faith, who realized that everything depends on God and that it is He Who grants the victory. He knew, nonetheless, that the Lord never wants to help those who are lazy but to assist with grace those who do everything that is in their power. This effort becomes a prayer of action, when combined with trust in Him.

As a consequence of his holy intentions, all of Saint Fernando†s ventures met with success. He was absolutely invincible, personally as well as while directing his armies, conquering hearts and minds as completely as he did cities and strongholds. He knew that there is no holier enterprise than to do one†s duty before God, and that his first obligation was to rescue his own country.