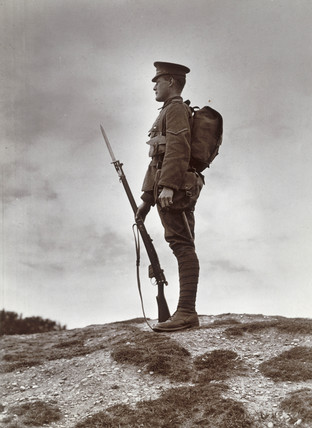 A WWI soldier with bayonet fixed. Read on:

Here is a description of an Easter Mass you don’t see every day:

“Easter Sunday was quite a red letter day in the annals of the town (Pas de Calais, France). The regiment turned out in full strength, headed by the pipers, and crowded the sanctuary, every inch of the church, and out beyond.

I had eight stalwart sergeants standing guard with fixed bayonets (ASSAULT WEAPONS) round the altar.

At the Consecration and also at the Communion of the Mass the buglers sounded the Royal Salute which is given only to monarchs.

The guard at the word of command presented arms (In other words, they manfully brandished their ASSAULT WEAPONS), and in our poor humble way we tried to do honour to the Almighty King of Kings on the day of His glorious triumph.

I must not forget to add that the lassies and maidens did us the honour to sing during the Mass, casting many an envious glance (so rumour says) down on the handsome Irish lads praying so devoutly below.”

This was in a letter written to his home by Fr. William Doyle, S.J., on Easter Sunday of 1917. It turned out to be his last Easter, as he was killed in action in August of 1917.