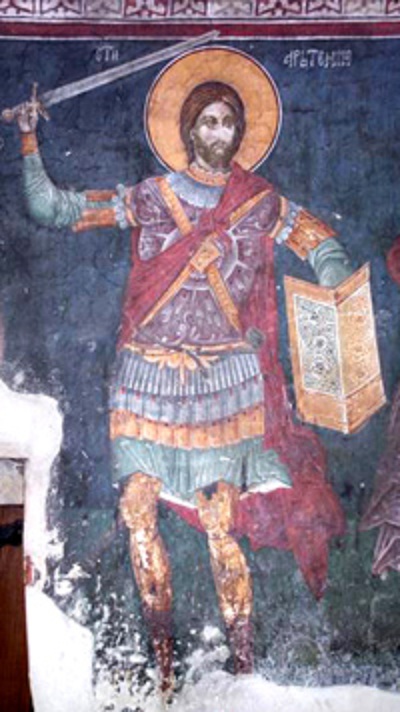 Oh my goodness! Look at that horrible man swinging that ASSAULT WEAPON like some sort of a masculine, manful manly man, or something. I’m scared! HOLD ME!!!

Oh, wait. That’s St. Artemius. He was a commander in the Imperial Army under Emperor Julian the Apostate in the mid-4th century. When Julian condemned two priests, Eugene and Macarius to torture and death, Artemius SPOKE UP AND CALLED BEE-ESS, KNOWING THAT IT MEANT HIS OWN TORTURE AND DEATH.

Sound familiar? Do you see why I post these mini-bios? These are the people who did what millions upon millions of YOU should be doing – standing up and calling bee-ess on a tyrant and antichrist, even though it means certain destruction, imprisonment and maybe even death, eventually. I post these in part to SHAME all of you. Shame on you. Shame on your cowardice and faithlessness. Shame on your worshiping of your true god: your precious, precious crap.

Here is, in part, what Artemius said right to Emperor Julian’s face:

Do not have illusions – O Emperor! – in following your love of Satan, do not persecute the Christians protected by God. The power of Christ is invincible.

Julian instantly had Artemius arrested, tortured in an attempt to get him to apostatize (which FAILED MISERABLY), and then finally after giving up, had Artemius beheaded.

You people do realize that the Obama regime is doing the same thing – they are using the coercive power of the government, specifically through the IRS, to get as many of you as possible to apostatize – and MAKE NO MISTAKE, capitulating to the regime, the HHS mandate and paying taxes which you know for a metaphysical certitude are going to pay for abortions and advance sodomite “marriage” under the law, not to mention reforming and arming the islamic caliphate, is apostasy from Christ.

Spare me your emails pleading for your property. I’m liquidating mine as we speak. I’m really not interested in your, “But, but, but I can’t lose my house” whining. This time next year, if war hasn’t broken out and I’m still alive, I’ll probably be living in a van down by the river. And if it comes to it, I’ll happily go to my imprisonment and execution and be grateful for the blessing.

Hell is forever. FOREVER. There is exactly one thing that is impossible, and that is for you to cease to exist. You will always exist. Forever. And ever. One hundred billion trillion years will be the “warm up”. The question is, where will your existence be? Will it be inside the Trinity pondering the Beatific Vision, or will it be in hell? Ask yourself if your house is worth eternity in hell. Seriously.

Oh, and Julian eventually got greased himself, and his dying words were, “Vicisti, Galilaee.” You have won, Galilean.

St. Artemius, pray for us.