I was officially foreclosed upon on December 28th on my home/office here on Kornbrust Circle. The final nail in the proverbial coffin was actually the fact that I couldn’t provide a 2012 tax return – due to my tax strike. Not only had I never missed or been late on a payment EVER on any property, up until the fall of 2012, I had actually always set up my mortgages to OVERPAY each month, which always knocks years and years off of the repayment time.

If you have been reading Market-Ticker.org for any length of time, you have heard all about the sleazy, illegal foreclosure mess, and the fact that banks are foreclosing on properties which they DO NOT OWN OR HOLD THE MORTGAGES ON.

Well, I’ve got EXACTLY that going on right here. The mortgage was originally through Wells Fargo back in 2007 when I bought this condo to be my offices. Before that I was renting a beautiful office space in the penthouse of one of the high-rises in the Denver Tech Center. We were on the west-northwest corner, and let me tell you, the views were JAW-DROPPING; the entire Front Range in panorama. BUT, I realized after 18 months there that I could buy a condo and have the mortgage be something like $750 per month less than my rent in the highrise, and my employees could bring their kids, we would have a full kitchen, and have all kinds of space for expansion. My long-term plan was to eventually bring in a commercial grain broker, currency broker, and an equities/metals guy and have a really pleasant, easy-going Christian introducing brokerage. THANK GOD I never did it. I wonder if I would have had the fortitude to shut down after MF Global if I had other brokers whose livelihoods I would also have been responsible for. Would I have put a misguided concern for employees above the well-being of the clientele? Would I too have gone into denial about the destruction of the financial markets? I’d like to think not, but we’ll never know.

By the way, for clarity, I never intended to actually LIVE here at Kornbrust Circle. This was, and still is in my mind, “The Office”. I had a big, lovely house that I put on the market the night Obama was elected in November 2008 that I was able to sell (thanks be to God) in July of 2010. That property has devalued well into the six-figures in the last 2.5 years. I feel bad for the folks that bought it.

Anyway, below is the letter that I received from the law firm handling the foreclosure. Look at item two. It says:

The current creditor to whom the debt is owed is Wells Fargo Bank, N.A. The loan is serviced by: Wells Fargo Home Mortgage. 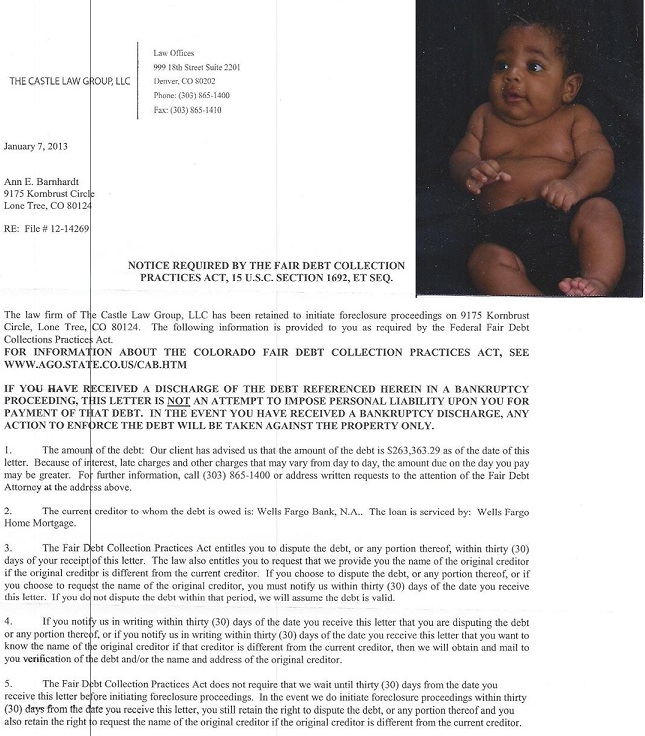 Okay. This is what Denninger and all of these other people are talking about. That statement is a lie. Wells Fargo is NOT the creditor to whom the debt is owed. In September of 2010, Wells Fargo started calling me AGGRESSIVELY, pleading with me to refinance my mortgage. After getting numerous assurances that it would cost me nothing, I agreed. In fact, I used the reduction in the interest rate from 2007 to 2010 to shorten the term of the mortgage, while keeping the same monthly payment, which for me also included an additional principal payment. And, it didn’t cost me anything. Fine. No problem.

Well, about two weeks later, what do you think arrives in the mail? A letter from Freddie Mac stating that Wells Fargo had sold my mortgage to Freddie. Wells Fargo was using the refi market as an impetus to dump as many mortgages as possible onto the United States government – and taxpayer.

If you would like proof of this, I got you covered.

GO TO THIS WEBPAGE and fill in the data for my property here on Kornbrust Circle.

What you will get is a page that says:

Yes. Our records show that Freddie Mac is the owner of your mortgage and it was acquired on October 13, 2010. This date is also referred to as the Freddie Mac settlement date.

See the problem? Wells Fargo is NOT the creditor to whom the debt is owed, and thus they have no standing. But, since the Rule of Law is dead, third parties can now collect debts which they are not owed. In other words, all contracts and contract law are now void, and all that matters is who you know within the government.

This is the same phenomenon seen in the MF Global bankruptcy, except in reverse. I recently Tweeted that the bankruptcy judge ruled that none of the MF Global customers have standing as creditors. These oligarch cronies can arbitrarily declare CLEAR, OBVIOUS creditors as having no standing, while giving “creditor” standing to megabanks that have NO creditor standing at all. That’s the point I’m trying to make here.

Now to the baby. Why am I in this pickle at all? Why do I have a mortgage at all? I should have paid this place off, right?

Back in 2008 my realtor approached me and told me that she was pregnant (out of wedlock, of course), and that she herself was in foreclosure on her home. She indicated that if she didn’t find a short-sale buyer she would “have to” abort the baby. She had previously murdered two of her pre-born children in what she referred to as “procedures”. She told me that her mother was coming to live with her, and that between the two of them they would easily be able to pay rent to cover the mortgage payment and take care of the baby.

I bought her house. I effectively ransomed the life of the child.

She made a few sporadic payments on cash loans she took out from me, but rent was never paid.

I carried these squatters for 50 months, while the house itself devalued by 45%.

I finally was able to evict them this past summer after I discovered via a Google search that she had been convicted of embezzling $250,000 from a State Housing Authority. For that, she got a slap-on-the-wrist probation sentence. I contacted the probation office and her probation officer basically executed the eviction.

Now to the moral of the story. The baby in the picture, who is now a four year old boy, would, in all likelihood, be dead if I hadn’t eaten this $125,000++ that his mother consciously swindled from me. He is being raised in a home by a sociopathic, con-artist hustler mother, in the Godforsaken hip-hop culture. The chances are that he is going to end up being a fornicating, lying, cheating, moocher just like his family. And I ransomed his life, and am now in foreclosure myself partially because of it. Losing my brokerage income certainly contributed, but I wouldn’t be in this mess, upside-down with no traction of my own, if I had that $125k back.

Was it worth it?

You’re damn right it was worth it. The Holy Spirit willed and executed that baby’s conception and knit him together, molecule by molecule, in his mother’s womb. There is a CHANCE, albeit a slim one, but there is definitely a CHANCE that that baby could attain the beatific vision, somehow, someway through the grace of God. Or his children. Or their children. Or their children. Is $125k worth that? Am I content to be a tiny cooperator in that potentiality, even if it hurts really, really bad here on earth?

Yes. Hopefully, if I make it, I’ll get to meet those people in heaven. That would be pretty cool.