One of the most common phrases heard on the ground in Rome and among “Churchy people” on all sides over the past decade since Pope Benedict’s failed attempted partial abdication has been, “THEY’RE WAITING FOR RATZINGER TO DIE.”

Yes, things have been bad for over sixty years, but what we have seen so far has been preparation of the battlefield for the final battle. Now, with their final obstacle and personally despised archenemy gone – The Pope, Pope Benedict XVI Ratzinger, with the Petrine See vacant, the forces of evil no longer feel themselves restrained. It’s really, really hard to not see the narrative of 2 Thessalonians 2 and the removal of the Katechon, the Great Restrainer, not playing out before us in real time.

Rorate-Caeli put together a laundry list of these indignities, insults and humiliations HERE.

But I have one more anecdote to add – one that actually has a silver lining that is quite heartwarming.

As the Rorate piece states:

– One of the things that most annoyed the bishops and cardinals present was the indolent attitude of Cardinal (Mauro) Gambetti, archpriest of St. Peter’s Basilica. His cold and mechanical attitude in the celebration of the rites (and the voice of a man just out of bed that could be heard), and his lack of obedience of many rubrics did not go unnoticed.

Here’s what was communicated to me from Rome, with permission to make this public:

After Pope Benedict’s body was moved into St. Peter’s Basilica in the very early morning darkness of Monday, January 2nd, IN A GREY CARGO VAN – NOT EVEN IN A HEARSE – the wicked and hateful Gambetti, Cardinal archpriest of the Basilica, immediately after processing back to the sacristy (seen in the video below at the 4:57 timestamp) re-emerged and ordered all of the lights turned off and the Basilica emptied and closed until the next morning. He literally wanted Pope Benedict’s body to lie exposed on the bier, alone, in the dark, unattended, during the overnight hours for the three days of Pope Benedict lying in state in the Basilica.

And here’s where a ray of light shone forth in the darkness:

The Swiss Guards REFUSED TO LEAVE.

The evil Gambetti AGAIN demanded that the lights be turned off, and that the Basilica be cleared and closed until the morning.

AGAIN, the Swiss Guards refused to abandon Pope Benedict’s exposed corpse – an unthinkable humiliation and desecration of a body that no mortuary or funeral home would EVER allow for ANY PERSON, much less a Pope.

The evil wretch Gambetti, seeing that these MEN were not going to relent, then huffily declared that if they wanted to stay that it would NOT count toward their “on-duty” time, that they would be “off the clock”, and no on-duty Swiss Guards would be permitted to stand overnight vigil, only Swiss Guards who were already off-duty, and thus volunteering their own private time, and would be expected to work their full, regular shifts regardless of if they had been up all night standing vigil. And then he stomped off, seething.

And so, it warms my heart to tell you, that Pope Benedict’s body was never left alone as he lay in state, that the Swiss Guards stood all-night volunteer watches at his side until he was placed in his coffin, and thus Pope Benedict’s body was never desecrated by exposure and abandonment, which was what the vile Cardinal Gambetti, fully in line with the truly evil Antipope Jorge Bergoglio, intended to happen.

Please pray for the Swiss Guards, who, sadly were given the ultimatum, as were all Vatican employees, to take the deathjab or lose their jobs. Quite a few Swiss Guards did refuse and left the Vatican, but the ones who remain to this day have been injected multiple times with the poison, by definition. They might have heart damage in the physical sense, but they showed with their actions last week that they still have heart in the more important and lasting sense of the word. 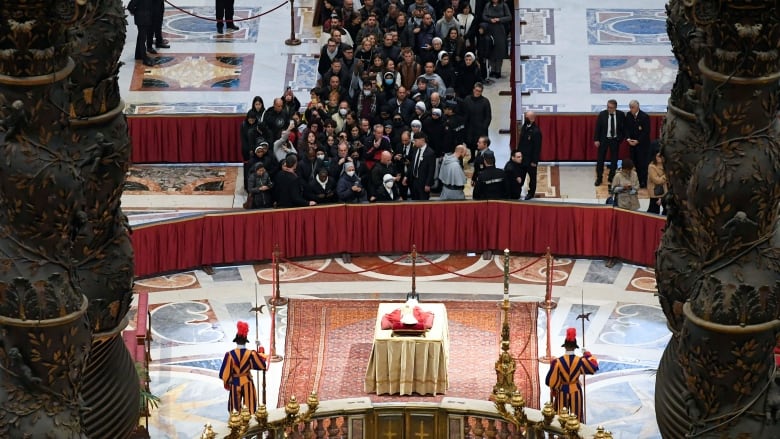 They never left his side. May God protect and reward them.