Here is Part 3 of my interview series from the summer of ARSH 2015 with Pat Archbold of Creative Minority Report.

How young and naïve we were in the summer of ’15. 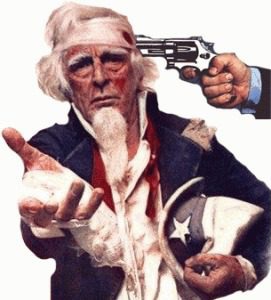 Pat Archbold: At what point is it legitimate to take up arms against this illegitimate government? I think that armed resistance might be legitimate as a defensive act if several states secede. Just war theory requires a reasonable chance of success? Without secession of multiple states, can armed defense be legitimate?

Alpha Bravo: Well, isn’t that the question du jour? I always snicker at Dennis Miller’s old joke that George Washington started blowing people’s heads off for taxing his breakfast beverage… and it wasn’t even coffee. First, as we discussed earlier, the whole American paradigm was and is deeply, deeply flawed and contained in itself from the beginning the seeds of its own inevitable collapse and destruction as John Adams himself was sure to point out, so we must be careful when citing the American Revolution as a positive example. But, those of us still capable of nuanced thought can tease out useful information from even a Deist-Freemasonic construct.

First, the founders of the American Republic did in fact do what I referenced as a current impossibility earlier. Namely, they FIRST established a replacement government so that there would be no absence of government, no state of anarchy. As St. Thomas teaches, it is gravely, gravely sinful to take up arms against a tyrant without first providing for a replacement government. If a people simply liquidate a tyrannical oligarchy (because there is in actuality no such thing as a pure tyranny consisting of one man – even the most powerful tyrants are still undergirded and enabled by an oligarch class) without providing for the replacement, the result of the state of anarchy will be the ascendancy of an even worse tyrant. Anarchy, by definition, enables the biggest psychopath thug to take control. Anarchy, therefore, is an always-fleeting interstitial period between a bad government and an even worse government.

The primary problem with the post-American populace is a near-unanimous unwillingness to defend itself against tyranny (!!!!! -AB ’22), and thus even contemplate or discuss the formation of a replacement government. As long as the Mickey-D’s is still slinging burgers and Cokes, and they can still watch all of their favorite agit-porn teevee shows and gaze upon this year’s popular and oh-so-lovable psychopath characters and their wacky, psychopathic hijinks, the very notion of rocking the boat, much less laying down one’s life, will engender nothing but contempt and hatred of the Jeremiahs by even the so-called “conservative right”. Believe me, I know.

But for the sake of the discussion, another problem with the former United States is the fact that the post-Christian, modernist cancer has so thoroughly metastasized. Any notion of geographical boundaries representing a sufficiently clean ideological compartmentalization is pure delusion. Every urban area will be its own discrete theater. There is no “Mason-Dixon Line”. Take Wichita, Kansas for example. One might be tempted to think that central Kansas, bordered on the south by Oklahoma, would be a “gimme”. No way. Wichita is a cesspit and stronghold of the rap/hip-hop culture, which is, of course, the Stepin Fetchit of the Washington DC regime. Every urban area is poisoned. Only the tiniest rural towns could establish a physical perimeter without sealing the enemy inside.

Beyond that, the possibility of establishing any sort of redoubt or new country by those attempting to flee is, for the first time in human history, impossible. (!!!! -AB ’22) The migration, spread and settlement of the entire planet has largely been driven by people trying to get the hell away from some other group of people. For some it was done with a handshake, for most it was done as a pure matter of survival: either go elsewhere or be killed. That is no longer possible as there is no more “unsettled land” and technology has effectively put us all in the same room. (!!!! -AB ’22) But more importantly, the forces of evil will not permit any competition. Any state secessions will be instantly crushed. The (former) US military “can’t” fight a few dozen inbred musloid retards to anything better than a draw, but rest assured that the full force and power of the American military AND economic complex would be brought to bear on any group of people that simply wanted to relocate to Montana, delink from Washington and be left the hell alone. Any sane, Christian state established anywhere on the planet would be instantly crushed, both militarily and economically, without mercy, because in the age of “tolerance”, “dialogue” and “accompanying one another, body-to-body, with tender caresses of mercy”, the jackboot stomps the face forever.

I heard it said not long ago that a group of people “with nothing to lose” must be assembled to advance the cause. I disagree. Only when people who have EVERYTHING to lose lay down their lives and sail into a battle that, like Lepanto, looks impossible on paper, will there be hope. Has that time to lose everything come? Oh, yes. Most definitely it has.