It is often said that no one questioned Pope Benedict’s resignation until Bergoglio manifested as an arch-heresiarch. The implication here is that no one would question or care about what Pope Benedict attempted if an actual Catholic had emerged as putative Pope from the faux-conclave in March of ARSH 2013.

This is not correct, and I covered this in my second video presentation at the 47:20 timestamp:

There were FOUR Canonists jumping up and down declaring that the whole “Pope emeritus” thing was an ontological impossibility, and that only resigning the ministry of the active governance of the Church and not the Office (munus) was invalid in toto.

—Manuel Jesus Arroba, a professor of canon law at the Pontifical Lateran University, who raised the alarm only TWO DAYS after Pope Benedict’s announcement.

—Former rector of the Pontifical Gregorian University, the Jesuit Gianfranco Ghirlanda, published a lengthy article on March 2, ARSH 2013 refuting the possibility of a “Pope emeritus”.

—Valerio Gigliotti, a professor of the history of European law at the University of Torino.

—Fr. Stefano Violi, a professor of law at the theological faculty of Emilia Romagna.

Citation HERE from Sandro Magister’s blog in September of ARSH 2014.

So, it is incorrect to say that no one objected until the dripping evil of Bergoglio was manifested. Canonists were objecting and sounding the alarm even before Pope Benedict’s putative effective date of 28 February at 8:00pm, and certainly before the faux-conclave even began.

How good is the Divine Providence, how much does Christ love His Holy Church, and love us as His individual sheep, that the Wolf is so clearly visible and recognizable? Even with the Faithless Hirelings trying desperately to convince the sheep to jump into the jaws of the Wolf, even though the Wolf is obviously “the voice of a stranger”, the sheep know the voice of the Good Shepherd. “I know mine, and mine know Me.” The Wolf is VISIBLE, VISIBLE, VISIBLE. And even beyond that, the breach that let the Wolf into the pasture in the first place was recognized, visible, and the alert was sounded from literally the very beginning, even before the Wolf entered. But the faithless hirelings – a non-trivial number of whom are in cahoots with the Wolf – refused to mend the fence, or even acknowledge the breach. And they will answer for it.

Jesus Christ, Good Shepherd, have mercy on us, on Pope Benedict, and on Your Holy Church outside of which there is no salvation. 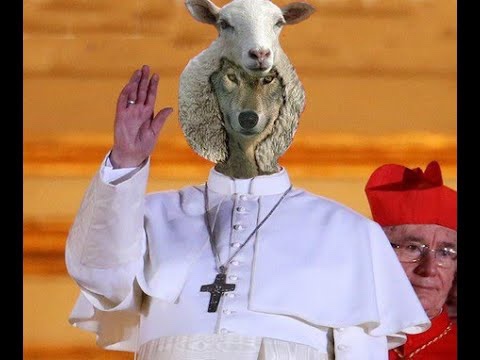