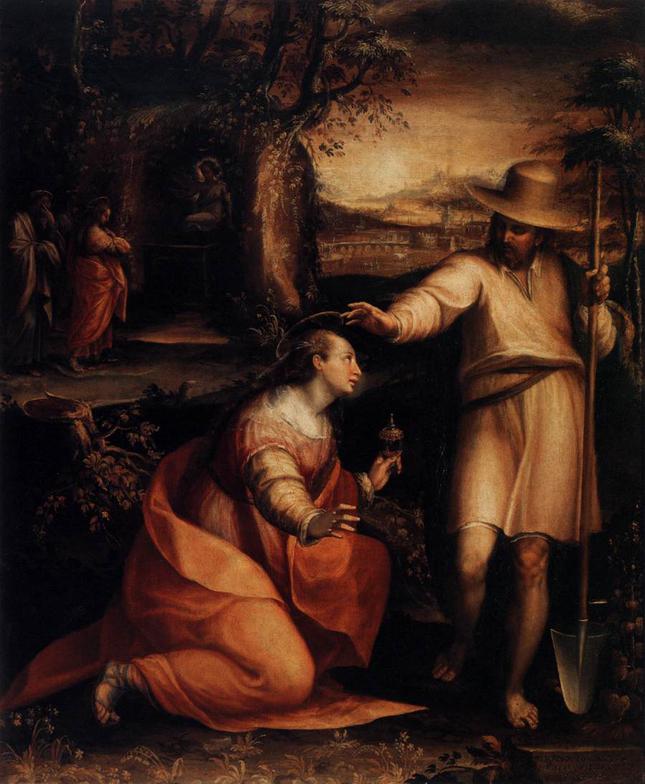 The beautiful painting above is of Mary Magdalene seeing Our Resurrected Lord in the garden close to the Empty Tomb and initially mistaking Him for the gardener.  In art Our Lord is commonly depicted in this specific scene as a gardener by his spiffy gardener’s hat – and only sometimes carrying a gardening implement, as in this image.  As a great fan, connoisseur and wearer of hats, I am always tickled to see Our Lord behatted.

But there is massive meaning in all of this, and it goes back to the Garden of Eden, and teaches us about the Eucharist, and specifically about the importance of worthy and unworthy reception of the Eucharist.  This is especially germane as one of the hallmarks of the Bergoglian antipapacy is the pogrom of sacrilegious desecration of Our Lord and Savior Jesus Christ in the Holy Eucharist.

Anyone who objects to the enthusiastic desecration of the Eucharist will, of course, be denounced as a “fundamentalist” or “rigid” or whatever is today’s entry in the Antipope Bergoglio book of insults.

Our Lord appeared as a Gardener to Mary Magdalene because He is, in fact, The Gardener of Eden (Genesis 2: 8-9) and would walk in The Garden (Genesis 3: 8).

Interestingly, we see from Genesis that it was His intention to commune with mankind AS FOOD from the very beginning, whether man fell to original sin or not.  The Tree of Life wasn’t a mere foreshadowing of the Eucharist, it was in fact a species of the Real Substantial Presence of God, in the form of food, to be eaten by man in order to give man eternal life.  Again, the Fruit of the Tree of Life was an actual species of the Real Presence, not a symbol.  So Christ was not only The Gardener of Eden, He Himself was also the “Crop”.

Now think about this – when Adam and Eve fell, what did God do? He drove them out and even sent an angel with a flaming, rotating sword to specifically physically block them so that they could not COMMIT THE SIN OF SACRILEGE OF EATING OF THE FRUIT OF THE TREE OF LIFE, THAT IS THE PHYSICAL SUBSTANCE OF GOD HIMSELF, AND THUS MAKE THEIR SITUATION EVEN WORSE.  It wasn’t enough to merely tell them that they couldn’t eat of the Tree of Life (a species of the Real Presence) because Our Lord knew that satan would tempt them to eat it anyway, and they would, because they were now guilty of the sin of pride.

Our Lord drove Adam and Eve out of The Garden and posted an angelic sentry BECAUSE HE LOVED THEM. Our Loving God EXCOMMUNICATED Adam and Eve in order to protect them from themselves, knowing that they would do even further damage to themselves by eating of His Physical Substance unworthily.

Only after Our Lord had incarnated, and True God and True Man had suffered and died for the sins of the world, could mankind once again be able to eat of the Fruit of the Tree of Life.  The Cross is The Tree.  Jesus Christ hanging from it is The Fruit of The Tree of Life. The Eucharist is the Flesh and Blood of Jesus Christ, True Food and True Drink. Christ’s Passion, Death and Resurrection re-established The Garden of Eden, ended the protective banishment, and lifted the excommunication of mankind.

This is why Our Lord said to the Apostles in the Upper Room on Holy Thursday, “With desire I have desired to eat this pasch with you…”

When God says, “I’ve REALLY been looking forward to this…”, something incomprehensibly good and profoundly important is about to happen.

And this is why, in these days, growing ever darker, that satan, through his infiltators in The Church – some of them consciously willing, some of them merely stupid, are pushing for what the serpent could NOT effect in The Garden: the sacrilegious desecration of the Fruit of the Tree of Life.

It is true.  There are no angels with flaming swords to prevent unrepentant sinners from receiving the Eucharist.  Would that there were.  I would be very happy if I were blocked from receiving the Eucharist by an angel, because then I would absolutely know that I was not in a state of grace, and could take steps to correct that in the confessional. It is always a nagging concern in the back of one’s mind every time one receives the Eucharist.  Or, at least it should be.

But, considering the steps that God took in The Garden of Eden, one should think very long and very hard about the gravity of unworthy reception, and of the truly satanic malignancy of this final push to get those in openly unrepentant mortal sin to desecrate the Eucharist, and for the priests, who have been the last line of defense, standing in place of the angel, instead to be the willing facilitators and encouragers of sacrilegious desecration of Our Blessed Lord in the Eucharist.

And this is why Our Risen Lord appeared to Mary Magdalene as a Gardener, as we can tell by the spiffy hat.