The importance of the precision between the terms “munus” (OFFICE) and “ministerium” (MINISTRY) can not be overstated.

Have you bought and read Archbishop J. Michael Miller’s ARSH 1979 doctoral dissertation, “The Divine Right of the Papacy in Recent Ecumenical Theology” yet?  The text is a 300 page Rosetta Stone – in AMERICAN ENGLISH, no less – on the 20th Century mostly-German madness (although the American Cardinal Dulles figures in) to “fundamentally transform” the Papacy precisely along the lines of OFFICE vs MINISTRY.  My paper copy has arrived, so it is now much easier to flip through and cross-reference the text, and what has absolutely leapt out at me ties together a quote by +Fulton Sheen, a quote from +Ganswein’s infamous May 20, ARSH 2016 speech at the Gregorianum in Rome, and the news that just broke that Antipope Bergoglio is ordering the final, complete dissolution of the Papal Household, which until Paul VI changed its name was called since the SECOND CENTURY the “Papal Court.”

The key term that just keeps cropping up is “DEMYTHOLOGIZE”.  As in, “demythologize the papacy”.

DEMYTHOLOGIZE:  reinterpret (a subject) so that it is free of mythical or heroic elements; reinterpret what are considered to be mythological elements of (the Bible)

In so-called “ecumenical” circles, it was the Lutheran heretic Rudolf Bultmann who brought the term to prominence in the early 20th century, having said, “We cannot use electric lights and radios and, in the event of illness, avail ourselves of modern medical and clinical means and at the same time believe in the spirit and wonder world of the New Testament.”

Speak for yourself there, Rudy.

+Miller’s dissertation is 300 pages of arguing the necessity of demythologizing the Papacy for the sake of “ecumenical unity” by moving away from the notion of the Petrine Office as a divinely instituted, unchangeable monarchy and focusing instead on the changeable “Petrine ministry” which is continually “emerging” through the workings of “the Spirit”.  (I get the feeling that “the Spirit” ain’t who most people think….) Miller’s concluding section (pages 285-287) titled “Recommendations For Future Dialogue” contains such nuggets as:

”First, ecumenical dialogue might well gain in clarity if the term “ius divinum” is abandoned in the future.”

”A second term to be avoided is ‘the primacy’. Because it can refer to either Petrine primacy or to papal primacy, it is ambiguous. We recommend therefore that the term ius divinum be replaced, and that the Petrine function always be distinguished from its realization in the historic papacy.”

”Thirdly, the consequences of agreeing to accept a Petrine function should be drawn out to show its ecumenical significance.  This allows non-Catholics to reconsider their present need for a ministry of unity directed to the universal church, without limiting their reflections to the present form of papacy.”

”Catholics must ask themselves whether the papal ministry must necessarily be exercised as it has been in the past and is in the present.”

The “demythologizing” of the Papacy has cropped up as a trendy buzzterm, and we see it used by no less than +Ganswein himself, in his May ARSH 2016 speech, which was approved by Pope Benedict:

”It was “the least expected step in contemporary Catholicism,” Regoli writes, and yet a possibility [Papal retirement] which Cardinal Ratzinger had already pondered publicly on August 10, 1978 in Munich, in a homily on the occasion of the death of Paul VI. Thirty-five years later, he has not abandoned the Office of Peter — something which would have been entirely impossible for him after his irrevocable acceptance of the office in April 2005. By an act of extraordinary courage, he has instead renewed this office (even against the opinion of well-meaning and undoubtedly competent advisers), and with a final effort he has strengthened it (as I hope). Of course only history will prove this. But in the history of the Church it shall remain true that, in the year 2013, the famous theologian on the throne of Peter became history’s first “pope emeritus.” Since then, his role — allow me to repeat it once again — is entirely different from that, for example, of the holy Pope Celestine V, who after his resignation in 1294 would have liked to return to being a hermit, becoming instead a prisoner of his successor, Boniface VIII (to whom today in the Church we owe the establishment of jubilee years). To date, in fact, there has never been a step like that taken by Benedict XVI. So it is not surprising that it has been seen by some as revolutionary, or to the contrary as entirely consistent with the Gospel; while still others see the papacy in this way secularized as never before, and thus more collegial and functional or even simply more human and less sacred. And still others are of the opinion that Benedict XVI, with this step, has almost — speaking in theological and historical-critical terms — demythologized the papacy.

Now, let’s tie it all together with the famous quote from +Fulton Sheen on the Antichrist and the Antichurch:

That’s the key, right there.  That is why the words “munus” and “ministerium” matter so very much.  In the context of the Papacy, the OFFICE is DIVINELY INSTITUTED and is protected by a specific and unique SUPERNATURAL GRACE.

Now, think about the Antichurch.  The Antichurch, by definition is NOT Divinely instituted – it is exactly the opposite, it is set up by satan.  Therefore, the Antichurch will contain NO DIVINELY INSTITUTED OFFICES, only man-made “ministries”, including its visible head or heads – its Antipope/s.

Pope Benedict XVI went out of his way to say he was NOT resigning the Petrine OFFICE, but only the “active ministry”.  +Ganswein confirms this repeatedly and in no uncertain terms above.

Now we have Antipope Bergoglio, who EVERY DAY has even the “elect” denying the GRACE OF STATE and UNIQUE SUPERNATURAL PROTECTION of the Papacy, because that is the only way they can hold the false premise of Bergoglio being the Pope, which they are for various and sundry reasons desperate to do. (Ahem, MONEY, ahem, careerism, ahem, EFFEMINACY)

So, what has happened over the past almost six years, is that the entire world, including the so-called “elect” have become completely desensitized to and even vicious partisans and defenders of the false notion of a “papacy” devoid of any supernatural grace.  DEMYTHOLOGIZATION!!

In other words, the pump has been totally primed for the full manifestation of the graceless, satanically instituted Antichurch with “even the Elect” merrily skipping into it, and congratulating themselves as they go for their “theological sophistication and dazzlingly humble submission to authority”.

Anyone who DARES point out that Antipope Bergoglio CLEARLY, OBVIOUSLY does NOT enjoy the GRACE OF STATE promised by Christ Himself to the Petrine OFFICE, ius divinum, is browbeaten, gaslighted, calumniated – whatever.  Every time you read a so-called “Trad Catholic” talking head arguing that Antipope Bergoglio is “in bounds”, “totally within historical precedent” and that “maybe Vatican I was wrong” and that having faith in the supernatural protection and grace of state attached to the PETRINE OFFICE, which, remember, Pope Benedict went out of his way NOT to resign, is some sort of manifestation of stupidity, insanity, affective immaturity or “hyper-Uber-ultramontanism”, realize what is going on.  +Fulton Sheen nailed it.  Everything in the Antichurch MUST be devoid of Divine content.  Including its head/s.  But we know that many of the “elect” will be deceived by it.  Thus, the “elect” MUST come to accept a thing they wrongly call “the papacy” that is totally devoid of supernatural grace, and not only that, but ACTIVELY REJECT THE TRUE POPE.

Now, to news that broke just the other day: Antipope Bergoglio is looking to dissolve the Papal Household/Papal Court.  Of course he is.  Because this is all part of the satanic pogrom of trying to convince the world that the PETRINE OFFICE, a DIVINELY INSTITUTED AND SUPERNATURALLY PROTECTED MONARCHICAL OFFICE no longer exists. Only a “synodal ministry”.

Except it does exist, and will continue to exist. No matter what they try to do. 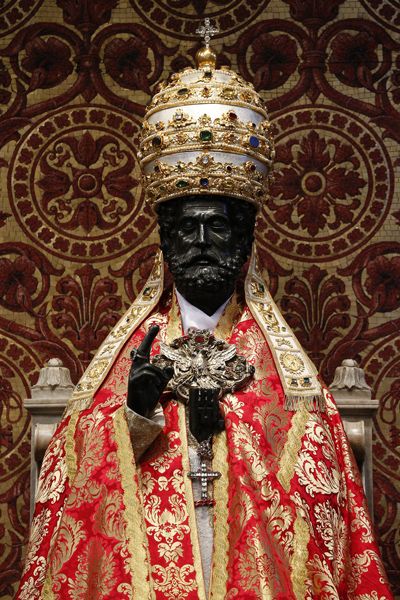