I’ll open with a thoughtful email from a Nebraska wheat farmer:

My name is X and I will keep this short as I am sure you receive tons of emails. My family farms in Nebraska raises wheat. Lots and lots. When you count all the cousins..we farm thousands and thousands of acres. My question is this. Is not this entire war about the wheat? Remember in 2016 when wheat was like $3.80 per bushel because Russia dumped all that wheat that they had leftover from their bumper crop on the world market? It almost bankrupted American wheat farmers. If Putin combined his wheat exports with Ukraine’s exports in the near future (assuming he wins this conflict) and wheat got down to, say, $2.00 per bushel….then what? American farmers couldn’t even afford to start their tractors at that price. Maybe China gets all or alot of their ag products from a combined Russia/Ukraine. To prevent that I think America has no choice but to enter into a conflict with Russia? What are your thoughts?

First, China is 95% self-sufficient in terms of wheat production. They are in no way dependent upon Russia/Ukraine for wheat.

Second, the objective of the Washington DC Deep State/New World Order is the total state control of all food production, so driving American farmers out of business once and for all via impossible energy and fertilizer input prices combined with policy-suppressed commodity prices is exactly what they want – with a potential added bonus of actual hunger in North America.  Americans have proved from the earliest days of the CoronaScam that they are zero threat to the Deep State/NWO oligarchy and can be coerced into anything including borderline suicidal acts and cult child sacrifice with shockingly minimal effort. After watching the Death Injection pogrom, can you IMAGINE what atrocities and auto-genocidal acts the American people could be coerced into doing if faced with actual starvation?

Now to the point of this essay.

THIS WAR, WHETHER YOU WANT TO ACKNOWLEDGE IT OR NOT, IS FOUNDATIONALLY ABOUT THE GLOBAL RATIFICATION AND INSTALLATION OF SODOMY AS THE DOMINANT AND “NORMATIVE” MORAL HEGEMONY.

It is certainly true that there are other massive objectives, collectively called “The Great Reset”, revolving mostly around total economic control and human population reduction, but these are SECONDARY, again, whether you choose to believe this or not, to the agenda of sodomy in all its forms.

Simply look at how the Ukraine-Russia war is being framed.  It is the “freedom-loving, liberty-loving, righteous LGBTQ friendly” Ukraine against the “Christian theocrat anti-LGBTQ dictator” Putin (I still marvel at the insanity of this description).

“Freedom” and “liberty” are now explicit dogwhistles for SODOMY.  The “freedom” is the freedom to publicly engage in and advance sodomy, and to coerce others into the same – most especially children.

Sodomites, and really satan himself as the ultimate driver of these events, are DEMANDING that a global thermonuclear war be fought FOR THEM, in order to install a global regime of not merely tolerance of genital acts so utterly vile that even the demons themselves can’t stand to be around them due to their nature as angelic beings, but the DOMINANCE of the culture of Sodom.

At this point people ask, “But Ann, this makes no sense.  If the world is destroyed or nearly-destroyed by nuclear war and total societal collapse, these oligarchs and sodomites will have nowhere to go, nothing to do, no commodities, goods and services to consume.  Their lives will be every bit as destroyed as everyone else’s.”

And here again we have to pull that focus back and acknowledge the PRETERNATURAL as the primary driver of events.  Satan and the demons know that they have lost and that they will never, ever see God.  There is no hope for them.  They made their choice, and are eternally locked-in because they had SO MUCH INFORMATION about God – conceivably as much information as could possibly be conveyed short of the Beatific Vision Itself. And despite having such profound knowledge of God, knowing that HE IS existence itself, Infinite Goodness, Infinite Beauty and INFINITE LOVE, the demons, led by satan, utterly consumed with rage and jealousy at NOT being the vector of the Incarnation of the Second Person of the Triune Godhead, passed over in favor of a little Jewish girl so filled with humility that she was worthy to be the Mother of God and the Queen of Heaven, freely chose to reject and rebel against God, knowing that their choice was irrevocable.  It’s done.  So what is the point of the raging? What is the point of trying to destroy human souls? Why is satan gunning to see sodomy installed as the global hegemonic paradigm?

It could also be well-argued that the desire by both demons and men to see the world burn in a nuclear holocaust in order make the culture of sodom the dominant culture over the entire earth is a direct “revenge operation” for God’s destruction of the cities of Sodom and Gomorrah and three satellite villages.  Remember, the people of Sodom and Gomorrah, when they appeared as a mob at Lot’s house and demanded that Lot bring out to them the visitors he was lodging (angels, in fact), weren’t there to gang rape the visitors. They were there to DEMAND that the visitors RATIFY SODOMY. They were there to DEMAND that the visitors EXPLICITLY APPROVE, and even PARTICIPATE in sodomy with them.

DOES THIS SOUND FAMILIAR????

Now, let’s look at why a KGB agent with a history of murdering his political opponents, and who dumped his wife and took up with a gymnast, and is clearly addicted to facial mutilation, is being painted as a “Christian fundamentalist theocrat tyrant dictator”.

Putin has said the following things:

That’s it, really. These points aren’t even exclusively Christian. Every one of these points falls under the Natural Law, which is why even atheists and pagans, up until just a few years go, almost universally held these items as givens.

If you are old enough, stop and think about YOUR perception of sodomy, say, thirty years ago when the big push in the media was just beginning.

Now just stop and consider where we are today. Speaking against sodomy is already criminalized as “hate speech” and “discrimination”.

And, to the point of this essay, the Sodogarchy (aka Globohomo) are literally, right now, as I type this, agitating for NUCLEAR WAR, first and foremost in EUROPE, which is, of course, the center of Christian Civilization, with Rome being the visible central locus of the One True Church. In order to install Sodogarchy as the dominant cultural milieu, Christianity must not only be infiltrated, but completely memory-holed. Every reminder of even the existence of Christianity must be PHYSICALLY destroyed.  The Church MUST be destroyed in every sense, both spiritually and physically. An explicitly sodomitical Antichurch MUST be erected to replace the True Church.

This infiltration and erection of a sodomitical Antichurch is the usurpation by Antipope Bergoglio and the monstrous Antichurch that he presides over. That’s why these things are just EVER SO SLIGHTLY IMPORTANT and CANNOT be shrugged off.

Ever been to Europe? Ever been to Italy? With a church every 50 yards? With sacred images on nearly every street corner, and on every other building? With art museums filled with room after room after room of paintings and sculptures of Christian subjects?

They want it gone. They want it all burned and pounded to ash and rubble in exactly the same way that God Almighty pounded to rubble and burned to ash Sodom and Gomorrah. They want it all utterly wiped from the earth so that all memory of it even existing will be wiped within a generation or two – assuming there is anyone left at all.

And why? SPITE. The sodomites, wallowing in the bloody porcine diarrhea of their Diabolical Narcissism, depravity and spirit of vengeance, want to drag down and destroy everyone and everything with them. They want to punish the world for 6000 years of “oppression” of sodomy. They want humanity to make atonement TO THEM, and to acknowledge their “superiority”.  Satan and the demons? They are at war with God Himself, even knowing that they are defeated, are so consumed with spite that they want as much collateral damage as possible and so they come after human beings, because the only way they can “hurt” God is by hurting us, and tricking us into joining them in their free choice to hate God, and thus in eternal damnation.

This isn’t World War Three. It is far, far, worse.

This is WORLD WAR SODOMY.

Let us end with the words of Our Lord Jesus Christ to Saint Catherine of Siena, Doctor of the Universal Church:

“They not only fail from resisting this frailty [of fallen human nature] . . . but do even worse as they commit the cursed sin against nature [sodomy]. Like the blind and stupid, having dimmed the light of their understanding, they do not recognize the disease and misery in which they find themselves. For this not only causes Me nausea, but displeases even the demons themselves, whom these miserable creatures have chosen as their lords. For Me, this sin against nature is so abominable that, for it alone, five cities were submersed, by virtue of the judgment of My Divine Justice, which could no longer bear them. . . . It is disagreeable to the demons, not because evil displeases them and they find pleasure in good, but because their nature is angelic and thus is repulsed upon seeing such an enormous sin being committed. It is true that it is the demon who hits the sinner with the poisoned arrow of lust, but when a man carries out such a sinful act, the demon leaves.” 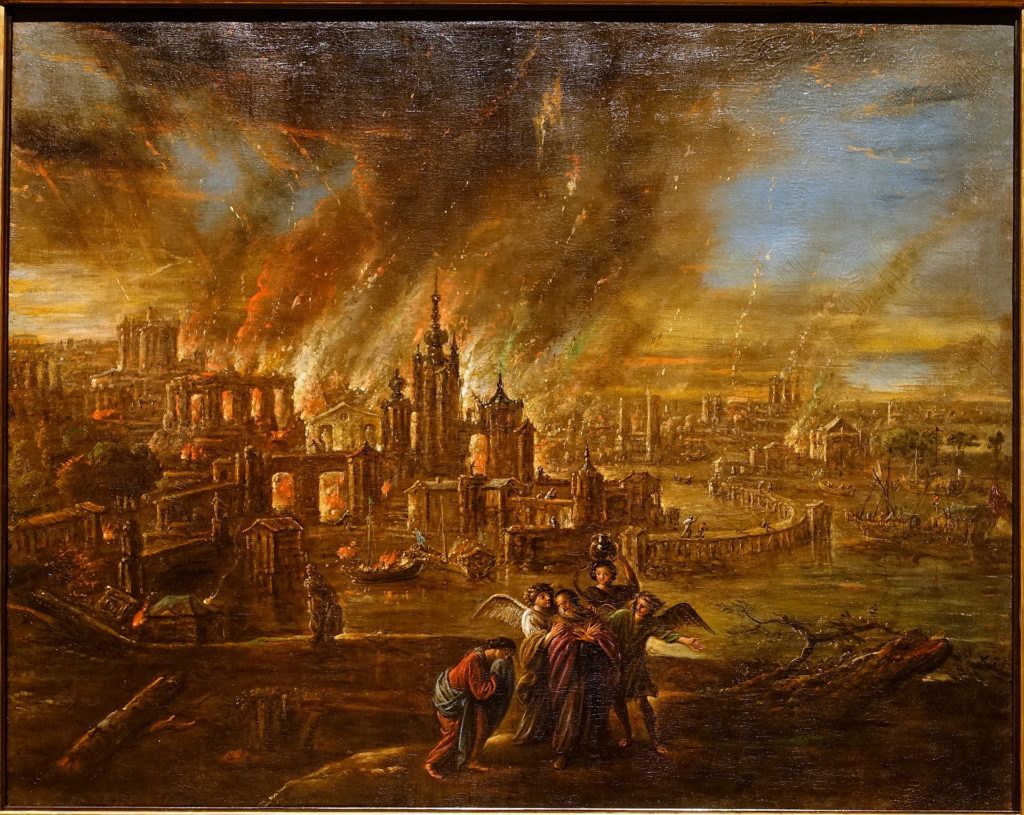