It’s a long piece, but very much worth the time. Here’s one of several punchlines, emphases mine:

“Let’s play the mind exercise out a little more and hack through some of the issues which I have heard raised by, for example, Ann Barnhardt, who is without question of the mind that Benedict is still Pope and Francis is a usurper antipope.  Along with Ann is a smart fellow with well-articulated arguments, Edward Mazza.

I’ll try to spin out what they have been discussing.  I hope I don’t put my foot wrong and mischaracterize their positions.  I’m happy to be corrected.

It seems that… in their view…

Benedict did NOT legitimately resign, because the language he used at the time he announced his resignation is confused. The confused language suggests that Benedict intended to resign the active dimension of his role, his ministerium (for example, doing stuff as Bishop of Rome and doing stuff as Pope to the larger world). However, he did not intend to resign his munus as Vicar of Christ.  Much turns on the technical term munus.

The fact is that munus and ministerium do not mean the same thing, though they are often bound together.  For example, one carries out a certain ministry in the Church because he holds an office, a munus.  Canon law says that the Pope has to resign the munus.

Canon 332 §2: Si contingat ut Romanus Pontifex muneri suo renuntiet, ad validitatem requiritur ut renuntiatio libere fiat et rite manifestetur, non vero ut a quopiam acceptetur.  … If it should come to pass that the Roman Pontiff resigns his office, it is required for validity that the resignation is made freely and that it be properly manifested, but not that it is accepted by anyone.

But Benedict said in his resignation:

Quapropter bene conscius ponderis huius actus plena libertate declaro me ministerio Episcopi Romae, Successoris Sancti Petri, mihi per manus Cardinalium die 19 aprilis MMV commisso renuntiare ita ut a die 28 februarii MMXIII, hora 20, sedes Romae, sedes Sancti Petri vacet et Conclave ad eligendum novum Summum Pontificem ab his quibus competit convocandum esse.…  For this reason, and well aware of the seriousness of this act, with full freedom I declare that I renounce the ministry of Bishop of Rome, Successor of Saint Peter, entrusted to me by the Cardinals on 19 April 2005, in such a way, that as from 28 February 2013, at 20:00 hours, the See of Rome, the See of Saint Peter, will be vacant and a Conclave to elect the new Supreme Pontiff will have to be convoked by those whose competence it is.

Words have meanings.   It is not right simply to conflate munus and ministerium as if they are interchangeable.  They are closely tied to each other but they are not synonyms.  Not even close.”

If a Pope doesn’t resign willingly, the resignation is invalid.

If the Pope has in mind some sort of project papacy – like bifurcate it – and that project is in fact impossible, then the Pope is in substantial error and the resignation is invalid.

Can. 188 – A resignation made out of grave fear that is inflicted unjustly or out of malice, substantial error, or simony is invalid by the law itself.

Either way, duress or error, Benedict would still be Pope in the sense of being Vicar of Christ, for sure, and perhaps also of Bishop of Rome.”

And as we are all getting a good, hard lesson in, the greatest act of violence one can do to the Papacy is not to deny that it exists, but rather to call a man who is not Peter, “Peter”.

Pray for Pope Benedict XVI Ratzinger, the one and only living Vicar of Christ since April ARSH 2005, whether he likes it or not, the Papacy, and the Church Militant, infiltrated, occupied, and in terrifyingly visible eclipse. 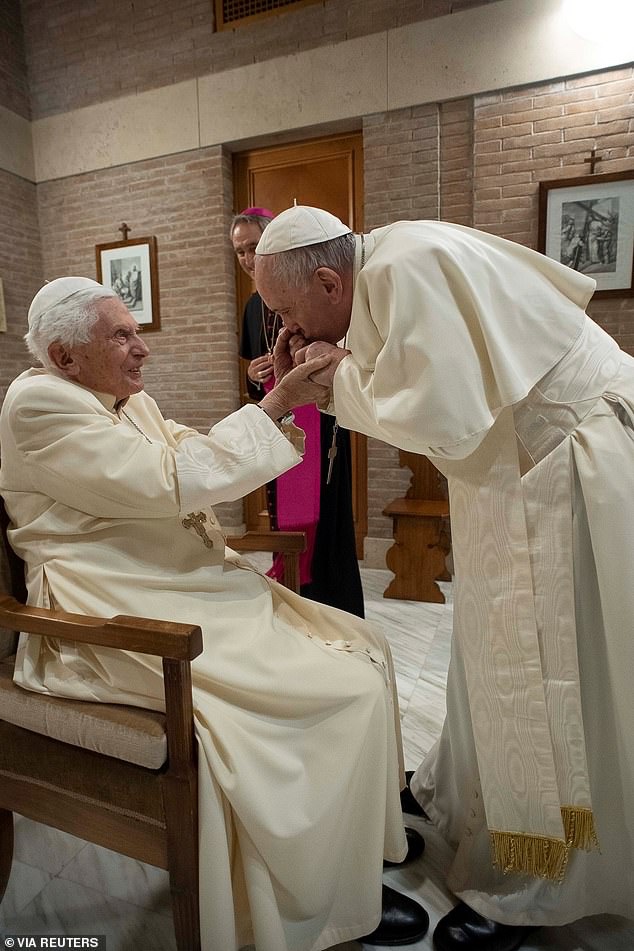