Once tonsured, as an acolyte-lectorette, I will, of course, be able to serve not only as an altar server-ette, but also as a straw-subdeacon-ette at solemn high Mass, as well, and will thus be able to discretely correct the name of the Pope at the Te Igitur from inside the sanctuary.

I have chosen a Josquin des Prez setting for my tonsure Mass. The recessional will be “I am woman, hear me roar” by Helen Reddy.

As soon as Antipope Bergoglio farts a document ratifying deacon-ettes, I’ll be ready to go immediately, having already been tonsured.

Once I’m a deacon-ette, it will be just a matter of time before I am given a red hat, and then my dream of dreams will finally come to full fruition: I will be a cardinalette princess of the Antichurch.

In terms of any thoughts of or aspirations to the Antipapacy at any future faux-conclaves, my response is, “No comment.” If it is God’s will that I be an Antipope-ette, then I will humbly submit to His inscrutable plans.

I must now source a Roman Cotta Griccia, because nothing but the best, and sew a mantilla to my teddy bear biretta.

I must say, the timing of this really is fantastic as I haven’t had a haircut in over a year. Snip snip!!!

(Anyone who wants over-under action as to when Liz Lev will be admitted into Bergoglio’s minor orders, email me at [email protected] .)

Anyone who would like more information on why Antipope Bergoglio is an Antipope, and Pope Benedict has been the one and only living Vicar of Christ since April ARSH 2005, START HERE.

Pray for Pope Benedict, the Papacy, and Holy Mother Church, the spotless and indefectible Body and Bride of Christ. 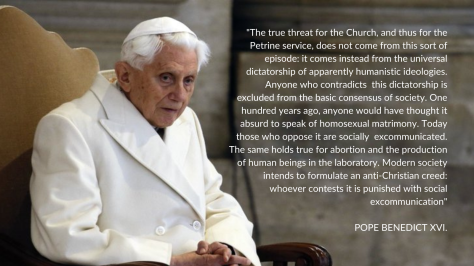