The primary end of the marital embrace is reproduction. It is a mortal sin to thwart the procreative function. Therefore, EVERY MARRIED CATHOLIC WOMAN who is pre-menopausal and not pregnant is, by definition, TRYING TO GET PREGNANT.

No DeathVaxx for you, married Catholic woman under the age of 50! 😊

This dynamic vis-a-vis the Coviet baptism injection probably never occurred to Antipope Bergoglio because he isn’t Catholic and is so far gone that the mortally sinful nature of contraception isn’t even on his radar. He has never, to my knowledge, uttered one word about contraception as a sin. And we all know that he is 100% onboard with the population reduction agenda, and is onboard with contraception in and of itself.

Yet another highly visible proofset that Bergoglio is neither the Pope, nor even Catholic.

And also, is an idiot. 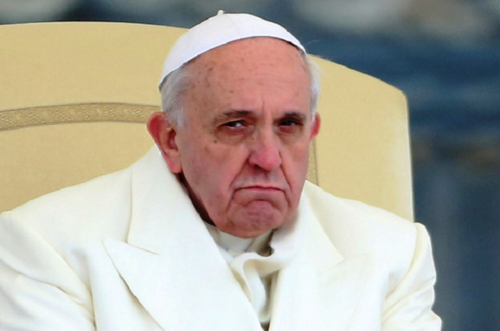