(Originally penned and posted in April of ARSH 2018. Reposted in “honor” of the diabolical “Nativity Scene” at the Vatican in ARSH 2020. I left the piece in its ARSH 2018 context because I cannot emphasize enough WHY the Divine Providence has permitted the total destruction of the tourist economy, first and foremost in Rome. Many point to the Pachamama demon worship in the Vatican in October of ARSH 2019. Yes, the Pachamama worship was “the last straw”, but I cannot emphasize enough that the total infestation of sodomites, both clerics and laymen (tour guides and staff), who used the Vatican and St. Peter’s Basilica as a giant gay village, with the sacristy of St. Peter’s, in particular, as a locale for sodomitical hook-ups was the demonic ANTECEDENT leading up to the Pachamama enthronement. CoronaScam and the resulting total cessation of tourism in the Vatican is 100% connected to and a corrective for the satanic, continuous desecration of the Vatican Basilica and Tomb of St. Peter since ARSH 1970 by sodomite clerics and especially Vatican tour guides… until CoronaScam. Let us pray that the arch-mafiosa grifter (and fan of fornication with clerics) Liz Lev and her coven of sacrilegious faggot “tour guides” NEVER regain access and can never befoul the Vatican ever again. Better it be destroyed than be the bathhouse that it was until ten months ago.)

In the player above is an audio file recorded last night (April ARSH 2018) in the Sistine Chapel.  This hellish noise is supposed to be a setting of the Stabat Mater, a hymn (or think of it as a poem, or sequence) composed in the 13th century.  If you have ever prayed the Stations of the Cross during Lent with ceremonies, then you probably recognize the Stabat Mater as the connecting stanza that is sung between each Station. Many composers have written settings of the Stabat Mater, including Palestrina, Vivaldi, Rossini and Arvo Part.

We will not even delve into the question as to why the hymn of the Blessed Virgin’s suffering at the foot of the Cross is being performed in the Vatican DURING EASTERTIDE. At this point, that question seems silly.  My question is, when are they going to book Beyonce or Marilyn Manson?  You know, for the YOUNG PEOPLE.

What I want to focus on is the truly evil inversion of beauty and ugliness on display, and the dynamics of Diabolical Narcissism that have almost completely destroyed western aesthetics. If you recall from my Diabolical Narcissism video presentation (specifically at the 1:45:36 timestamp), we delved into the fact that Diabolical Narcissists, having freely chosen to purge themselves of LOVE, and thus being incapable of experiencing genuine pleasure and happiness – only anger, hatred, jealousy and fear – literally have NO TASTE.  NOTE: I didn’t say they have BAD taste, I said they have NO taste.  I will explain it here as it was explained to me.

Let’s say you have a Beta DN man, sodomite, with an attachment to an Alpha DN psychopath woman (fag hag) above him. The Alpha DN psychopath woman is a wine connoisseur.  If you were to put two glasses of wine in front of the Beta DN man in a blind taste test, one being a glass of 1961 Chateau Latour, and the other glass being Franzia wine-in-a-box and said nothing, he would be incapable of discerning between the two. He has NO TASTE.  Now, what if we told the DN man that his Alpha fag hag absolutely LOVED the Franzia box wine, and that she thought the Chateau Latour was “complete shit”?  The DN man would then adopt the reported position of his fag hag AS DOGMA, and would defend it with near-violent gusto, and denounce and despise anyone that dared disagree. Mind you, he has zero ability to form an opinion himself.  All he can do is ride the coattails of someone else. This dynamic plays out in almost exactly the same way when the source of opinion is someone that the DN sodomite man is sexually attracted to.  If the “man of the moment” indicates any sort of preference, the DN will appropriate that position – until the attraction fades, or there is a “break-up”.  It is not uncommon to hear sodomites and other DNs say things like, “I USED to like x thing, until I broke up with y person.”  And remember, if the Beta DN is attached or attracted to someone with good taste, then the Beta DN will SEEM to exhibit “good taste” as well.  So, there are certainly people running around who can say “all the right things”, but have no actual taste themselves, and the pathology is every bit as twisted. Stopped clocks, and all that.

What has happened in the broad culture of the past 50-60 years is that as the populace, both male and female, has descended into intense EFFEMINACY, the ability to independently discern objective beauty has been almost totally lost.

The broad populace – not limited to Diabolical Narcissists – has become not just receptive to suggestion, but almost completely dependent upon it.

If the people on the TeeVee say, “this is funny,” or “this music is good,” or “these clothes are attractive,” [or, “there is a pandemic”, or “Biden won…”] the willing thralls nod in agreement and open their wallets. The willing thralls want to “fit in”, and want to feel themselves as being in agreement with or even equally as “sophisticated” as the so-called “elites”.

That is what is going on with the music above.  Very, very bad people resolved to infiltrate and destroy Christian Culture from the inside out several decades ago.  One of their declared goals was to destroy all art, and replace beauty with ugliness. Items 22 and 23 from the 45 Goals of Communism are:

22. Continue discrediting American culture by degrading all forms of artistic expression. An American Communist cell was told to “eliminate all good sculpture from parks and buildings, substitute shapeless, awkward and meaningless forms.”
23. Control art critics and directors of art museums. “Our plan is to promote ugliness, repulsive, meaningless art.”

Item 22 specifically cites sculpture (which we will get to in a moment), but we can very easily map “shapeless, awkward and meaningless” onto music with the words, “dissonant”, “harrowing”, “discordant”.  Hellish, soul-crushing noise.

I am hard-pressed to believe that the fact that the composer of the noise embedded above, James MacMillan, was a member of the Communist Party, and says that his music is heavily influenced by “Liberation Theology” is some sort of unfortunate coincidence.

And yet, if the so-called “elites” declare the hellish, soul-crushing noise “beautiful”, a terrifying percentage of the thralls, desperate to fit in and submit to the “elites”, will nod in enthusiastic agreement.  I found a video about the piece of noise embedded above in which one of the members of the choir declares it a masterpiece.  Sad, and frightening.

Given what we have discussed in this space about the Vatican, and how it is basically operating as a bathhouse, with sodomite encounters and orgies going on all the time – EVEN INSIDE ST. PETER’S BASILICA ITSELF, and with what we know from both prophecy and the work of Malachy Martin (“Windswept House” details the enthronement of satan which was performed in the Pauline Chapel – just next door to the Sistine Chapel, in the 1950s) and other whistleblowers about the practice of satanism inside the Vatican, one must assume that the physical spaces are completely infested with the demonic.  And over SIX MILLION tourists per year are herded like cattle through this demonically infested space, mostly by a mafia-coven of sodomite tour guides.  Further, the infiltrators have near-total power (in the earthly sense), and thus are manifesting their evil, as is actually required of practicing satanists.  And the sodomites are carrying on in the Vatican today as openly as the Folsom Street Fair.  So, why NOT have satanic, hideous “music” performed in the Sistine Chapel?  It isn’t as if anyone is actually going to do anything about it, right?

Finally, another proofset, also from Italy, but this time in Florence.  Across my transom some time ago can the following picture of a “sculpture” that was installed in the main square of the city of Florence – one of the most beautiful and famous squares in the world.  It looks like a giant robot came and pooped, leaving a 40 foot tall pile of metal manure.  If you do a websearch of “Firenze statua cacca”, you can read all about it.  “Cacca” is “poop” in Italian, apparently.  My favorite headine is:

That would translate as, “The statue that looks like a turd (excrement) that shames Florence”.

At least people openly called it “ugly”.  I wonder what people would say if “Giant Robot Turd” were to be installed in L.A.? 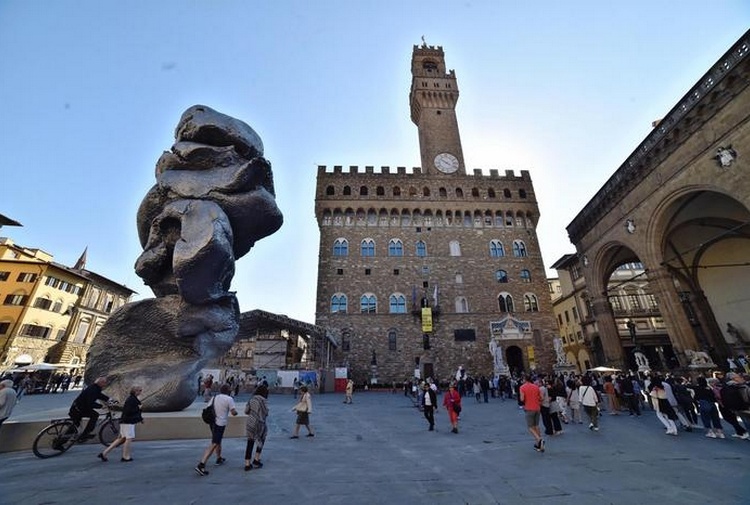 One might be tempted to say that none of this is terribly important, because beauty is, after all, in the eye of the beholder, no?

Yeah – NO.  Beauty is NOT in the eye of the beholder.  That is a lie.  Beauty is OBJECTIVE.  Furthermore, beauty is a constitutive quality of God Himself.  God IS Beauty, just as He is also Love, Goodness, Truth, Justice and Mercy. Therefore beauty exists OUTSIDE of the mind of man, and also can be defined.  St. Tomas Aquinas defined the categories of beauty as: Integritas (wholeness), Consonantia (proportionality), and Claritas (radiance). Whether it be giant, lopsided piles of poop or dissonant, screeching hell-noise, to call such ugliness “beauty” is, at its root an attack upon God Himself.  And that is why, at the end of the day, yes, this stuff does really matter.