Fauci is 100% in Bill Gates’ pocket and funded by him, and Fauci is heavily invested/stands to profit MASSIVELY from the fake vaccine market.

Here is Fauci just now reacting to Trump calling him out on Twitter as a fraud and a liar. FINALLY. 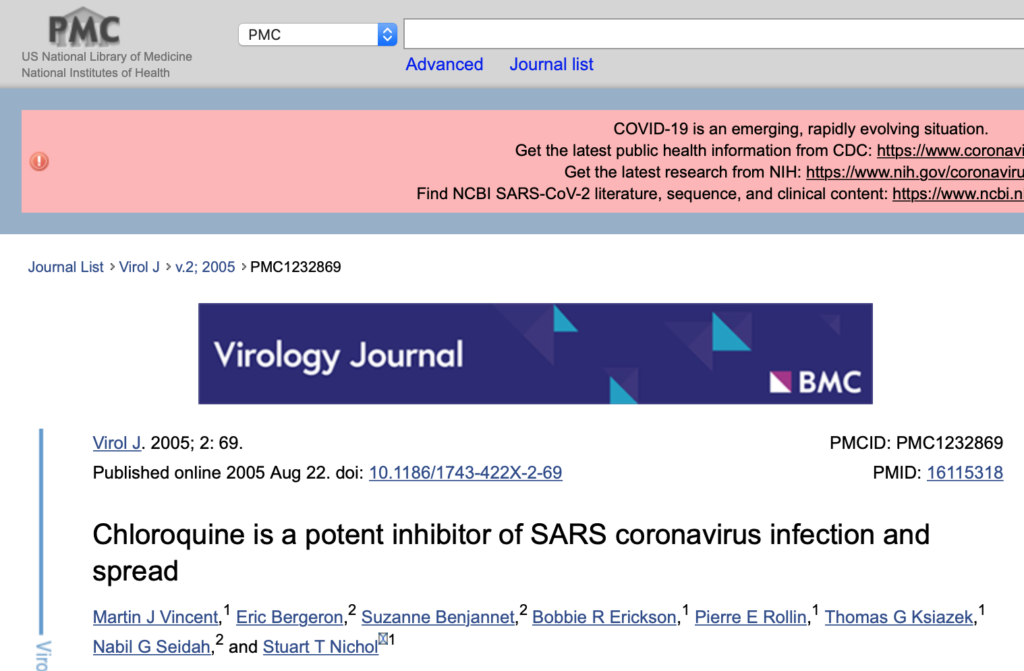 Now, here is an article from ARSH 2005 published in Virology Journal, the periodical of the National Institutes for Health, of which FAUCI WAS THE DIRECTOR.  So Fauci published this article.

We report, however, that chloroquine has strong antiviral effects on SARS-CoV infection of primate cells. These inhibitory effects are observed when the cells are treated with the drug either before or after exposure to the virus, suggesting both prophylactic and therapeutic advantage. In addition to the well-known functions of chloroquine such as elevations of endosomal pH, the drug appears to interfere with terminal glycosylation of the cellular receptor, angiotensin-converting enzyme 2. This may negatively influence the virus-receptor binding and abrogate the infection, with further ramifications by the elevation of vesicular pH, resulting in the inhibition of infection and spread of SARS CoV at clinically admissible concentrations.

Chloroquine is effective in preventing the spread of SARS CoV in cell culture. Favorable inhibition of virus spread was observed when the cells were either treated with chloroquine prior to or after SARS CoV infection. In addition, the indirect immunofluorescence assay described herein represents a simple and rapid method for screening SARS-CoV antiviral compounds.

Here is Fauci’s paymaster, Bill Gates, just the other day touting that everyone MUST take MULTIPLE doses of his fake vaccine, which caused systemic side-effects in 80% of the poor idiots who took it in a trial.  Vaccines for Coronaviridae are impossible because Coronas mutate extremely rapidly – which is EXACTLY what Gates et al NEED in order to maintain the fear and require people to receive multiple do$e$ PER YEAR. There. Is. No. Cure. For. The. Common. Cold.

And remember: ALL PREVIOUS ATTEMPTS AT A VACCINE FOR ANY TYPE OF CORONA VIRUS HAVE RESULTED IN A MARKED INCREASE IN VIRAL UPTAKE AND LETHALITY WHEN THE “VACCINATED” PERSON BECAME INFECTED.  VACCINES TURBOCHARGE CORONAVIRIDAE AND OFTEN KILL THE PERSON.

Fauci wants to deny that there is any non-vaccine therapy because he stands to make hundreds of millions off of the fake vaccine, and he especially has to try to discredit Hydroxychloroquine because it is a well-known, highly used for decades, and thus very safe drug in terms of knowing exactly what human dosage parameters look like, and because it is dirt cheap to produce.

Nobody makes hundreds of billions off of hydroxychloroquine. And it works for those few folks who actually need it.

WATCH THE LYING PSYCHO MADMAN GATES SCRATCH AT HIMSELF LIKE A DAMN HEROIN ADDICT.

And the reason Gates is unable to give anything but babbling deflections to questions about virology and medical side effects – STRANGE, CONSIDERING HE HAS ALLEGEDLY DEDICATED HIS LIFE TO EXACTLY THAT FIELD – is because Gates has zero interest in virology or medicine.  Gates is interested in EUGENICS, HUMAN POPULATION REDUCTION AND MASS STERILIZATION, and he also, I suspect, has some sort of a sexual fetish involving injecting people.  This is a known species of perversion.

Watch this recent interview with Bill Gates, where had to admit that the vast majority (80%) of test individuals, who took the high dose of the experimental COVID19 vaccine, suffered significant side effects. Notice how clueless he is about vaccine medical issues! https://t.co/0VUObkKvgX