What did the Blessed Virgin and St. John do at Calvary? They stood and knelt on the ground. The Mass IS Calvary. Ergo…

Excerpting from a Crisis piece by Fr. Rutler from several years ago. Now’s the time!

The last time I sat during Mass was the Easter Vigil. I sat during the Prophecies. Otherwise, at daily Low Mass, I kneel/stand throughout, mostly kneeling. 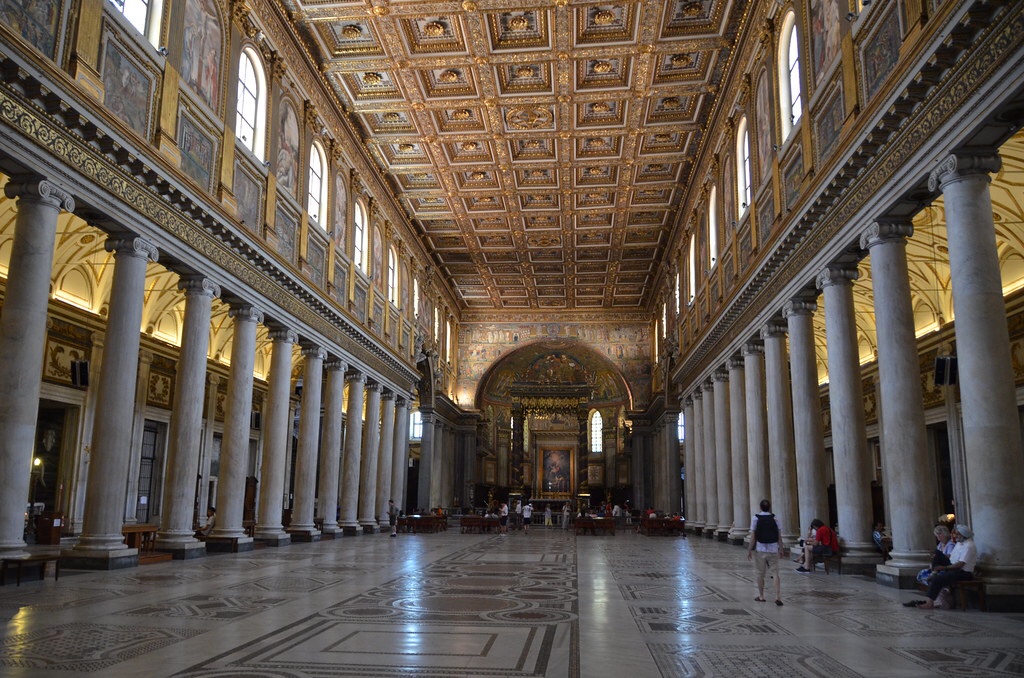 The whiskering of buildings with ivy is a metaphor for another aesthetic offense, and one more serious, since it is a reproach as much to ascetics as to aesthetics.   Pews are the climbing ivy of God’s house. My case is that they should be removed. I immediately alienate from this argument anyone whose limited aesthetical perception sees nothing wrong with electric votive lights and bishops wearing miters in colors matching their vestments. But the problem with pews is worse, for it is not simply a matter of taste. Pews contradict worship. They suburbanize the City of God and put comfort before praise.

For most of the Christian ages, there were no pews, or much seating of any sort. There were proper accommodations for the aged (fewer then than now) and for the infirm (probably more then than now) but churches were temples and not theatres.  One need only look at the Orthodox churches (except where decadence has crept in) or the mosques whose architectural eclecticism echoes their religion’s origin as a desiccated offshoot of Christianity [denial of the Trinity, Incarnation and Eucharist, combined with paganism. -AB] to see what churches were meant to look like.  The word “pew” comes from the same root as podium, or platform for the privileged, indicating that if there were any pews in the Temple of Jerusalem they were those of the Pharisees who enjoyed “seats in high places.” The first intrusion of pews into Christian churches was around the twelfth century and they were rare, and mostly suited to the use of choir monks in their long Offices. But filling churches with pews was chiefly the invention of the later Protestant revolution that replaced adoration with edification.

Increasingly, manorial lords had special seats in the churches that were in their “living” not unlike the Pharisees, and this eventually extended to other people of means and in fact became a source of income. Pew rentals were precursors of pledging for the bishop’s “annual appeal.” Pews were property and could be part of a bequeathed estate. It was this sort of instinct that moved Ambrose Bierce to say of Celtic culture: “Druids performed their religious rites in groves, and knew nothing of church mortgages and the seasonal-ticket system of pew rents.” By the eighteenth century, in Protestant lands, “box pews” became like little cabins, where people could doze during long services and even brew tea and keep small charcoal warmers. Pews gradually were adapted by Catholics in areas imbued with a Protestant culture and were alien to purer Latin traditions. Try to find pews in the great Roman basilicas. Curious, then, is the way some people have come to identify pews with “traditional Catholicism” when they are its antithesis.

Ascetically, pews stratify the people as passive participants. There actually are churches where ushers, like maître d’s in a cabaret, move down the aisle pew by pew, indicating when the people can go to Communion. Ensconced and regimented in serried ranks, the people are denied the mobility of the sacred assembly and even the sacred dance, which is what the Solemn Mass is—a thing far different from the embarrassing geriatric ballets called “liturgical dancing.”  Especially in a busy city parish, people wandering about and lighting candles and casting a curious eye at images, can be distracting, but it is also a healthy sign that people are freed by grace to be at home in the House of God, unlike the passive creature known as a couch potato or, in this instance, a pew potato.

Worse than plain wooden pews are those that are upholstered. Goodbye acoustics.   And anyone who gives priority to the softness of his seat rather than the sound of song, should humbly ask forgiveness of St. Cecilia who died suffering from more than the lack of a cushion, but was comforted—and eternally so—by good music.  Sensibly, seating should be provided for the elderly and physically limited.   Other seating should be moveable to permit different kinds of liturgical use, with space for kneeling.