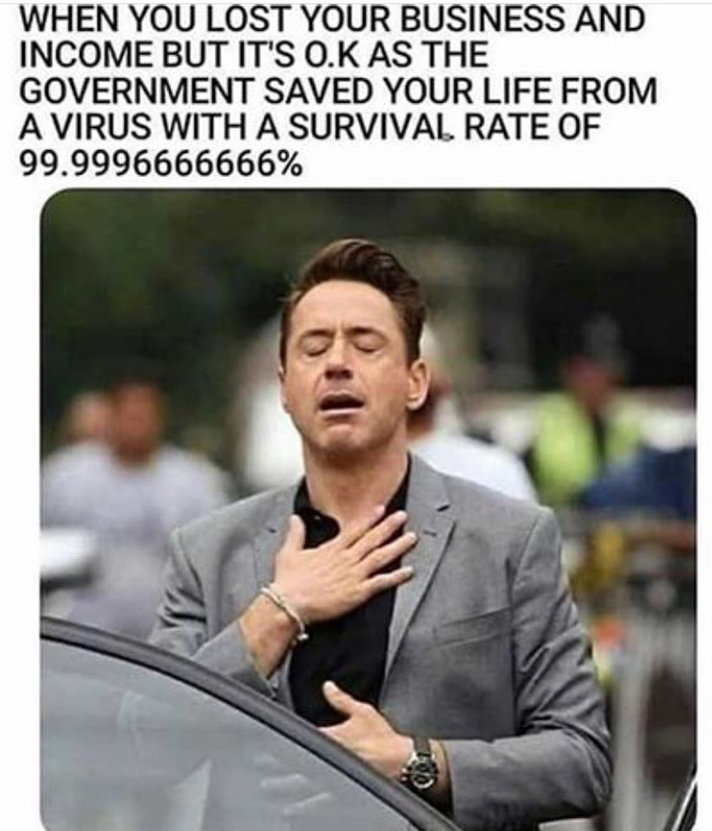 I’m just going to reprint this article below which is reprinted at W.M. Briggs’ place, but do click over, and absolutely bookmark Briggs.

I called bee-ess on CoronaCold on FEBRUARY 29 HERE as straight-up economic terrorism  because it was THAT GLARINGLY OBVIOUS.

Almost as glaringly obvious as Jorge Bergoglio being an Antipope….

Folks, evil people NEVER, EVER admit they were wrong, and they especially won’t in this case, because this CoronaCold hoax is probably the single-largest crime against humanity EVER executed.  People in positions of power should be tried for capital crimes against humanity and punished accordingly – IN PUBLIC, SO EVERYONE CAN SEE.  And what of civilians who pushed and fanned the flames of this evil, evil fraud?  Well, may God have mercy on them and may they seek His mercy in the Sacrament of Penance, and actually mean it – not just the sacrilegious “Ha-Ha! Off scott-free, YET AGAIN!  Gotta love the Sacraments!” routine.

Also, it is now becoming clear that a significant number of people have been murdered in cold blood under the cover of the CoronaCold Crime, most especially in New York, Belgium, and the UK (burn in Hell, NHS, the state religion of the UK).

Keep a close eye out for the children of evil among us to resort to the old trick of the non-falsifiable argument.  Remember, it is IMPOSSIBLE to prove a NEGATIVE.  In this world, it is impossible to prove that something WOULDN’T HAVE HAPPENED IF….  And the children of darkness, both demonic and human, know this perfectly well.

So, when you see the argument made, and oh buddy it is going to be made NON-STOP from here forward, call it out, and stay the hell away from the people who are trying to cover their own butts instead of saying those three little words, “I WAS WRONG.”

But, but, but… if we hadn’t done the totalitarian imprisonment of half the human race, wrought total economic destruction, and criminalized the worship of God and the Sacraments… MILLIONS OR EVEN BILLIONS WOULD HAVE DIED! WE SAVED YOU STUPID IDIOTS! YOU SHOULD BE THANKING US, YOUR MORAL AND INTELLECTUAL BETTERS!!”

CLICK OVER TO W.M. BRIGGS and bookmark him if you haven’t already.

Reposted in full, below, because it is that important.  Read it over and over until you get it.  There is no pandemic.

No evidence indicates that this flu was exceptionally dangerous.  All that happened was the totally fraudulent coding of deaths from other things to CoronaCold.  Period.

With the latest reports of plummeting death rates from all causes, this crisis is over. The pandemic of doom erupted as a panic of pols and is now a comedy of Mash-minded med admins and stooges, covering their ifs ands and butts with ever more morbid and distorted statistics.

The crisis now will hit the politicians and political Doctor Faucis who gullibly accepted and trumpeted what statistician William Briggs calls “the most colossal and costly blown forecast of all time.”

An egregious statistical horror story of millions of projected deaths, suffused with incense and lugubrious accents from Imperial College of London to Harvard School of Public Health, prompted the pols to impose a vandalistic lockdown on the economy. It would have been an outrage even if the assumptions were not wildly astronomically wrong.

Flattening the curve was always a fool’s errand that widened the damage.

President Trump had better take notice. He will soon own this gigantic botch of policy and leadership. No one will notice that his opponents urged even more panicky blunders.

The latest figures on overall death rates from all causes show no increase at all. Deaths are lower than in 2019, 2018, 2017 and 2015, slightly higher than in 2016. Any upward bias is imparted by population growth.

Now writing a book on the crisis with bestselling author Jay Richards, Briggs concludes: “Since pneumonia deaths are up, yet all deaths are down, it must mean people are being recorded as dying from other things at smaller rates than usual.” Deaths from other causes are simply being ascribed to the coronavirus.

As usual every year, deaths began trending downward in January. It’s an annual pattern. Look it up. Since the lockdown began in mid-March, the politicians cannot claim that their policies had anything to do with the declining death rate.

A global study published in Israel by Professor Isaac Ben-Israel, chairman of the Israeli Space Agency and Council on Research and Development, shows that “the spread of the coronavirus declines to almost zero after 70 days—no matter where it strikes, and no matter what measures governments impose to try to thwart it.”

In fact, by impeding herd immunity, particularly among students and other non-susceptible young people, the lockdown in the U.S. has prolonged and exacerbated the medical problem. As Briggs concludes, “People need to get out into virus-killing sunshine and germicidal air.”

This flu like all previous viral flues will give way only to herd immunity, whether through natural propagation of an extremely infectious pathogen, or through the success of one of the hundreds of vaccine projects (Ann notes: ABSOLUTELY NO WAY).

No evidence indicates that this flu was exceptionally dangerous. On March 20th, the French published a major controlled study that shows no excess mortality at all from coronavirus compared to other flues. SARS and Mers were both much more lethal and did not occasion what Briggs’ reader “Uncle Dave” described as “taking a hammer and sickle to the economy.”

We now know that the crisis was a comedy of errors. The Chinese let it get going in the raw bat markets of Wuhan. But together with the Koreans, the Chinese dithered and demurred and allowed six weeks of rampant propagation to create herd immunity before they began locking everyone up. Therefore, the Chinese and Koreans were among the first to recover.

The Italians scared everybody with their haphazard health system and smoking fogies. Crammed together in subways and tenements, the New Yorkers registered a brief blip of extreme cases. Intubations and ventilators turned out not to help (80 percent died). This sowed fear and frustration among medical personnel slow to see that the problem was impaired hemogloblin in the blood rather than lung damage.

The New York media piled on with panic, with bogus reports of rising deaths. “Coronavirus deaths” soared by assuming that people dying with the virus were dying from it and then by ascribing to the coronavirus other deaths among people with symptoms of pulmonary distress, even without being tested.

Now jacking up the case rate will be further pointless testing. As Briggs points out,

“Fauci is calling for ‘tripling’ of testing, which can only boost these dailies [case totals]. And make it seem like there’s a genuine increase occurring. Oh my! The daily reported cases are up! It must mean the disease is spreading!

“No. It could also mean, and probably does given all the other evidence we now have from sampling, that the disease was already there, and we just now have measured it.”

The death rate rises with further reclassification of pneumonia and other pulmonary deaths. When we reach herd immunity, and nearly everyone has the antigen, nearly all deaths can be chalked up to COVID19. Hey, it will be Quod Erat Demonstrandum for the panic mongers.
In a fascinating open letter to German Prime Minister Angela Merkel, epidemiologist Mihai Grigoriu concludes that with the French study, corroborated by findings from a Stanford antibody seroprevalence study in Santa Clara county, “the case for extreme measures collapses like a house of cards.” Grigoriu says that since the virus has already spread widely in the general population, efforts to stop further spread are both futile and destructive.

So let’s stop pretending that our policies have been rational and need to be phased out, as if they once had a purpose. They should be reversed summarily and acknowledged to be a mistake, perpetrated by statisticians with erroneous computer models.

Perhaps then we can learn from this experience with the flaws of expertise not to shut down the economy again for the totally bogus “crisis” of climate change.