Across the transom.  An EXCELLENT catch.

Keep up the good work. Re: BiP, I saw this bit (https://www.lifesitenews.com/blogs/pope-francis-criticizes-former-doctrinal-head-muller-he-has-good-intentions-but-is-like-a-child) from Maike Hickson at LSN from the same interview where Bergoglio expressed his happiness at being attacked by Americans. When asked about Cdl Müller’s (oblique) criticisms of him,
‘Pope Francis’ is reported to have answered: “He has good intentions, he is a good man. The Pope likes him. But he is like a child.” ‘

(I checked the original German at Katholisch.de and the translation is sound. Moreover the German reporter prefaces the quote by writing “Francis said verbatim…”)

What a good catch.  Antipope Bergoglio here is referring to Pope Benedict Ratzinger, who appointed his fellow German, and personal friend, to head the Congregation for the Doctrine of the Faith in ARSH 2012, the post which Joseph Ratzinger held before becoming Pope in ARSH 2005.

“The Pope likes him.”

Yep. The Pope does like him. The Antipope, however, hates him and fired him because as head of the CDF which is tasked with investigating sexual misconduct allegations, Müller was digging into Antipope Bergoglio’s sodomite predator buddies and wasn’t willing to “play ball” to Antipope Bergoglio’s satisfaction.  So, Antipope Bergoglio fired Müller and installed the unctuous Jezwit Luis Ladaria, who was himself indicted in France for covering up the sexual assault of children by sodomites, but has avoided trial by Bergoglio claiming diplomatic immunity for his sodomite heretic lapdog, Ladaria.

Yet another glaring, and frankly AWESOME example of how even the enemies of Christ and His Holy Church proclaim the truth.  The High Priest Caiaphas declared Christ’s divinity when he said, “Neither do you consider that it is expedient for you that one man should die for the people, and that the whole nation perish not.” Pontius Pilate declared Christ’s Kingship when he wrote “Jesus of Nazareth King of the Jews” on the crucifixion placard, and refused to change it when asked by the Jews to add “…who says he is…”  Pilate’s reply echoed throughout all time: “What I have written, I have written.”

In this case, even Antipope Bergoglio calls Pope Benedict THE POPE. 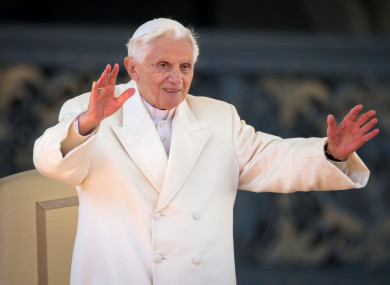