(This piece was originally written on May 16, ARSH 2016 for The Remnant Newspaper, four days before Archbishop Georg Ganswein delivered his informative speech on Pope Benedict’s attempted “fundamental transformation” and “expansion” of the Petrine Ministry at the Gregorianum in Rome.  I think the concept it addresses – hatred of God by Diabolical Narcissist clerics and prelates – is very much worth revisiting.  I have only very slightly modified a few phrases to reflect the reality of the Bergoglian Antipapacy qua Antipapacy. I hope it helps. -AB)

A question that I have always asked myself is, “Who are the people who would dedicate their lives to a Church that they clearly hold in contempt at best, and hate at worst? What would drive a man or woman to a life driven by and revolving around such pure, focused spite?”

Who are they? They are Diabolical Narcissists.

To review, Diabolical Narcissism is the condition in which a human being freely chooses to adopt the psycho-spiritual comportment and emotional palate of the fallen angels – demons. Simply put, the DN chooses, exactly as the fallen angels chose, to voluntarily purge himself of all love. As a result, he is voluntarily incapable of empathy, and incapable of the emotions derived from love, namely happiness, gratitude, joy, and sadness.

DNs are capable only of the demonic emotional palette of anger, hatred, envy and fear. They view other human beings as 3-dimensional cartoon objects to be used as the DN sees fit to provide him with diabolical narcissistic satisfaction. And, like the angelic demons, deep down, Diabolical Narcissists know that they are monstrosities, and thus are animated by an unquenchable spite, especially toward those “mere humans”, so far beneath them, and yet capable of that which they have freely rejected: love.

DNs derive the greatest diabolical satisfaction from forming attachments, sometimes referred to as the “idealization phase”, grooming the attachment/victim, then turning on and “devaluing” the attachment/victim, and then viciously abusing the attachment/victim. DNs derive intense diabolical satisfaction from not only the actual abuse of the victim, but oftentimes even more so from the “getting away with it” – watching as others around him, not wanting to incite his wrath or lose their connection to him, give their tacit approval or even their positive approval of his abusive actions. DNs are obsessed with the notion that they are a separate superior caste, an uber-aristocracy, distinct and above everyone else, even “super-human”, and as such the “rules” which apply to the rabble and the great unwashed do not apply to them. One of the greatest sources of diabolical satisfaction for DNs is to openly commit crimes, atrocities, scandalous sin or acts of abuse and NOT be held to account – to operate outside the law or the rules of human decency. In the secular political sphere this is referred to as “oligarchy”. On the micro level it has many names: megalomania, sociopathy and psychopathy.

But what happens when a DN forms such an attachment with, and then devalues, hates, abuses, and even declares war on God?

Well, that, dear reader, is what we call a “Jesuit”. That’s a little joke. This dynamic is certainly not limited to the Jesuits. It is everywhere in the Church, and can be seen amongst the laity, and Traddyland is by no means immune.

First, the initial phases of the DN’s “relationship” with God.

It is typically cerebral narcissists, as opposed to somatic or “physical” narcissists, that seek out God Himself as an attachment/victim. Cerebral Diabolical Narcissists see God as the ultimate attachment, and eventually, as the Ultimate Victim – which, ironically, is exactly what He is. God is everything that DNs want to be: omniscient, awe-inspiring, admired and adored, mysterious and much-discussed, perfect. Some DNs, especially those that were deified as children, will view God as their only peer, casting themselves in the role of co-God, fourth person of the “Quatrine Godhead”, or demiurge.

Across the board, these DNs believe themselves to be the “only one” who genuinely “understands” God. They believe that they have a completely unique and privileged relationship with God. It is the DN and God, alone together, against the world. Some in the protestant cult milieu will even use terms like “anointed”. DNs believe that they derive authority from their privileged relationship with God, and that this authority exempts and dispenses them from laws and behavioral standards as they apply to “mere humans”. They believe that the rules do not apply to them, but that they are able to sit in God-like judgment of others without countenancing the slightest hint of hypocrisy.

It bears mentioning at this point that the deification of children is no longer the rarity that it once was, found typically in years past with genius children and the children of heredity monarchs. In fact, the entire post-Christian education system and media complex today is specifically designed to drive children into pathological effeminacy at best and full-blown Diabolical Narcissism at worst. If the children around you today seem like insufferable mini-tyrant “Social Justice Warrior Gestapo”, it is because that is exactly what they are. They are an army of DN Stormtroopers, eagerly awaiting their orders, convinced of their “otherness”, and perhaps more importantly, regarding other human beings as expendable animated sacks of meat.

For DNs who enter the priesthood, religious communities, or who find themselves in a position of authority within The Church, be it working in the Chancery, or even laymen working within the Church, their predisposition toward cruelty, sadism and abuse is facilitated by any position of authority, even if they have not yet turned on and devalued God. Their default position of contempt for others is intrinsic to their diabolical nature, and thus they are attracted to positions in which they can, under the guise of authority, dole out narcissistic abuse.

In the beginning of the “relationship” with God, the DN idealizes God, in the sense that the DN convinces himself that God is completely congruent to himself. The more he learns about God, the more he sees himself in God. At this point, one should be reminded of the Archangel Michael whose very name is a refutation of this very dynamic: Who is like God? The Archangel knows that the answer to that question is NO ONE. To the DN, the answer, exactly like Lucifer’s answer is, ME!

After a while, the DN becomes disillusioned with God. When the world fails to fall at the DN’s feet, when the DN is not regarded, adored and obeyed as co-God, when God “fails to deliver”, the DN then devalues and turns on God just as with a human attachment/target. Interestingly, this devaluing almost always goes in steps, working up finally to God Himself. For example, a DN might first turn on and devalue his parish, his religious community, his Rite (going from Roman to Byzantine, for example), or even his vows (taking a concubine(s) of either sex). These are all mere stops along the road to the final destination for the DN, the rejection of God Himself. When this happens, the DN declares war on God Himself and, motivated by pure diabolical spite, sets out to do as much damage to God as he can. After all, the bigger the enemy, the more grandiose the DN feels. And there is no bigger enemy to set oneself against than God Himself. What this means for the DN is exactly the same as what it means for the actual demons: hurting and even killing the souls of other human beings out of hatred for God – an exact inversion of the Second Great Commandment, hating others for the hatred of God.

One of the surest signals of Diabolical Narcissism in general is what is referred to as “hating your own”. In the context of The Church, the DN priest or religious (and let’s not forget the loud but dwindling army of apostate lesbian nuns prowling throughout the world seeking the ruin of souls) will hold in the highest contempt orthodox, pious, devout Roman Catholics. In the micro context, a DN will typically devalue and abuse those closest to him – spouse, children, employees, even eventually friends, which are typically just sycophants. Non-sycophantic acquaintances usually cotton to the DN and flee for their own well-being in short order. To the DN, his “flock”, in whatever form it takes, becomes his hostage. And the greatest rush of diabolical satisfaction a DN can procure is the attention, affirmation and even adoration of the very people he is taunting, tormenting and abusing, while he is abusing them.

The most strategically effective position for a DN to do this is INSIDE THE CHURCH. And so, despite their descent into full-blown hatred of God, instead of leaving the Church, they entrench. They climb the Episcopal/Curial ladder. The higher they go, the more damage to souls they can wreak; the more they can enable and protect others like themselves who seek to abuse God and destroy His Church; the more they can destroy the Liturgy; the more they can punish and scandalize those who foolishly love God; the more lies they can tell the miserable, pathetic sheep, and then sit back and watch the sheep skip merrily into hell AT THEIR COMMAND, ignoring the very Voice of the Shepherd Himself; the more they can shake their fists at God, luxuriating in their crimes and not just their total immunity from any earthly consequences, but even to the cheers and cries of adoration of the sheep whom they are slaughtering – adoration given to them instead of to God.

Do I think that certain high-ranking churchmen today could be (or already are) Diabolical Narcissists? Of course.  In fact, I think most of them are.

Do I think that it is likely that they have devalued and are now consciously abusing God and with malice aforethought seeking to destroy His Holy Church even from the usurped See of Peter? Of course.  I think that is obvious.

Do I think that Antipope Jorge Bergoglio is already trying to cast himself to the world as somehow over, above and “beyond” Jesus Christ Himself? Of course.  That is also obvious. He, and his coven of Freemasonic sodomites, are building the Antichurch in the rubble of the True Church which they are systematically demolishing. 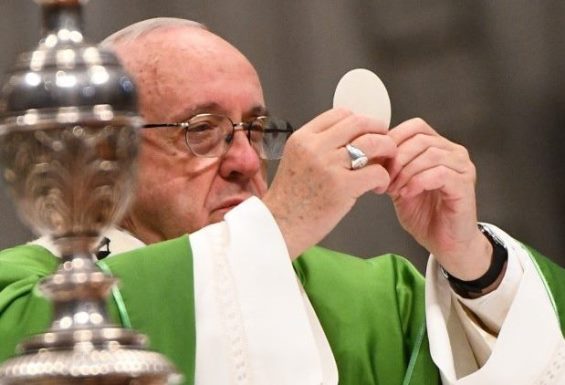