You wondered what value people actually derive from your podcasts and blogs. Here is an incomplete list of the benefits I have experienced and I have derived since I started following your blog in 2014.

-Greatly improved prayer life.
-Better confessions.
-Spiritual support through some spiritual dry spells.
-More spiritually docile
-Helping to offer my suffering from cancer and its treatment to God as reparation for the poor souls in Purgatory.
-Helping me to be be at peace facing the fact that cancer will take my life in 5 – 8 years and turning it to God.
-Helping me understand a relative, who is an Alpha Diabolical Narcissist.
-Most of all, helping me to better conform myself to God and His authentic teaching such that my soul will not be lost to Hell.
If it were not for you, I am not certain I would enter the Beatific Vision (after a rather lengthy stay in Purgatory.

There is no amount of money worth this. (I can afford it. I am an IT nerd.)

You should see a one-time donation on your Continue to Give account from me.

In Christ and in your debt,

(No, I am not some worshipful fanboy, just an awkward computer nerd.)

ARGH! Larger denomination donations make me worry.  I’m trying to build a broader base of low-denomination donor/subscribers with the Stale Big Mac Maneuver, which is a sounder paradigm in multiple ways, including smoothing out cash flows, and defense against temptations to pride and arrogance, and worrying about appeasing or not offending “big donors” (a HUGE problem in the Catholic Blogosphere/Media).  The laborer is worthy of his hire – NOT of exorbitance.  I can deliver Stale Big Mac quality.  I can’t deliver filet mignon topped with a medallion of foie gras (if you ever see that on a menu in a fancy-pants steakhouse, don’t ask questions – just order it).  Besides, whatever good comes out of this, it all comes from the Holy Ghost, very much in spite of me, my sloth, my intemperate wrath, and my use of the word “bee-ess”.

Most would consider the higher denomination donations to be a victory. The concern you express in getting them is a clear indicator of your spiritual state (true humility). Allow your generous donors to gain the graces inherent in acts of alms giving, even if it is you who is the humble recipient. Accept them in the spirit which they are certainly meant, one of gratitude and genuine corporal concern for you and your well being.

I continue to pray that your ears and hearing recover.

May God continue to bless and protect you.

Well, now you’ve done it.  In declaring me truly humble, you have taken me all the way back to square one.  I am reminded of the boardgame from my childhood, “Chutes and Ladders”. Square 87 takes you right back down to square 24.  Argh!

The ears are still a little leaky, and the Eustachian Tubes still have fluid in them which sloshes, but they are popping like crazy, and the tympanic membranes are both healing.  I can no longer hear my own pulse when going to sleep.  I would estimate three more weeks to complete recovery.

Mailbag #2 – A Letter from a Submariner

I am a 25 year veteran of the Navy, serving aboard five ballistic missile boats. I retired in 20XX from the USS XYZ, which at that time was in Norfolk Navy Shipyard undergoing refueling and SSGN conversion.

Although I did not serve with women aboard the boats I was on, I did during shore duty and my first tour early in my Navy days aboard the USS ABC in Holy Loch, Scotland.

The only thing that made being locked in a steel tube for 75+ days tolerable was crew camaraderie. After three or four days underway, your ability to sense time is gone, and three weeks feels like three months. This is due to a variety of factors, but mainly is the break of circadian rhythm due to the 6 on 12 off schedule, and of course no sunlight. The lack of ability to sense the passage of time I think is a tiny foretaste of hell, which of course goes on forever. I do not miss this aspect of the ballistic deterrent patrol.

The Trident submarine is not the crowded environment of the older boats. It is 560 feet long with four levels, wider passageways and overall a lot more space. I served aboard two Lafayette class boats before seeing my first T-hull, and I was astonished at how big it seemed by comparison. And it is aboard the Tridents that the first women were assigned. However, it is still not a surface ship with separate berthing areas containing heads. The showers on a Trident, whether officer, CPO or crew would need to be time shared. The officers have a head that contains two showers, dittos the Chief’s quarters, and the crew has two heads in the missile compartment, fore and aft. The only real privacy a woman could have would be in officer staterooms, which have two bunks each. There would be no privacy in the Chief’s berthing, and in crew’s berthing only if an entire nine “person” bunkroom were assigned to women.

I cannot imagine how difficult it must be for the crews that have women aboard. Adding sexual tension to that environment would make patrols intolerable. I am sure quite a few good guys have opted not to reenlist because of this. As to your comments about dumbing down the qual process – I agree. I can see this happening, with a CO not wanting to run afoul of the commissars of PC by failing to qualify a female OOD, EOOW, etc and submarine warfare.

The quality of our military has been in slow decline since Clinton, and I am sure it accelerated under Obama. Things haven’t changed much at all with the current administration, as they did not get rid of permitting “gays” serving openly, or trannies. I used to encourage young people to consider the military, but not any more.

Mittens Romney Grasping at Power Again – TIME TO REPOST THIS BLAST FROM THE PAST, “Romney Go Home”

I brought up in the last Barnhardt Podcast the whole question of the ethnic origin and influence of East Asians (Mongols) in the musloid world, and how the influx of Mongol blood and their warring culture influenced and vivified the spread of the islamic political system.  SuperNerd immediately cited the defeat of the musloids by the Mongols in the 13th century – and many listeners have chimed in.

The wiki page of “Turkic Peoples” is quite fascinating.  You can trace the Turkic People from darn-near the Korean Peninsula south and west to the Anatolian Peninsula, and the Huns obviously to Hungary.  And Finland has to be mentioned too, as Hungarian and Finnish are in the same completely crazy linguistic family which is most decidedly NOT Indo-European, which means that Finland was settled by a detachment of Huns, almost certainly. And Mongols and Huns are BOTH subsets of the broader category “Turkic”.

As an aside, check out this picture of an ethnically Finnish woman – NOT Swedish, but pure Finnish.  Her physiognomy is not atypical for full-blood Finns. 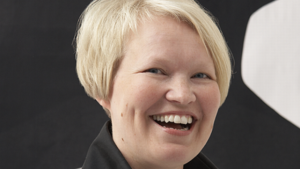 Dye her hair black and she could be your drycleaner. Or your Differential Equations professor. Or both.