Tell me more about how Jorge Bergoglio is Christ’s Vicar on Earth.

Remember, folks, the primary example or analogue people try to cite when desperately trying to convince themselves that Bergoglio is the Pope is Pope John XXII.  Pope John the XXII erroneously taught that nobody will enter into the Beatific Vision before the Final General Judgment, and then all of the saved will enter into heaven together at that time.

This is wrong.  People have been entering the Beatific Vision ever since Our Lord opened the gates of heaven after His death on the Cross.  Remember, He went down into the Limbo of the Fathers, also called the “Bosom of Abraham”, and sometimes also referred to with the word “Sheol”, or even “hell”, specifically “the harrowing of hell”, which is the term for His retrieving the all of the righteous Fathers who were in Limbo awaiting His coming. But this was not the hell of the damned.  No one ever leaves the hell of the damned.  It is a permanent fate. The people that Our Lord retrieved from Sheol were escorted and received into the Beatific Vision – including the Good Thief, to whom Our Lord said from The Cross, “Today you will be with Me in Paradise”.

So, that’s the great example of a Pope saying something that was erroneous and even heretical.  He was admonished and corrected, and he recanted.

WOULD THAT IT WERE that even 1% of the clergy and prelates today were as SOUND as Pope John XXII.

Antipope Bergoglio today in his daily verbal diarrhea of blasphemy said that when God flooded the world in the Noahic Flood, and later destroyed the cities of Sodom and Gomorrah, that these deaths were just like anyone else’s, including ours, because these people lived “normal lives” and that it’s totally okay and nothing to worry about because when they died, just like when we die, Jesus will come and get us, and say, “Come, come, blessed by My Father, come with Me.”

Clearly what he is doing is denying that the Noahic Flood and the destruction of Sodom and Gomorrah were supernatural events – just as he always denies the supernatural.  He is clearly trying to convince people that the Noahic Flood was a flood not unlike the Houston flood, or any other flood.  And Sodom and Gomorrah?  Meh, just a natural disaster.  Maybe a volcano, maybe an asteroid.  But they were just “normal” people who were killed in a purely natural disaster.

That’s right, folks.  The people killed in the Noahic Flood, and the SODOMITES killed by the wrath of God with fire and brimstone raining down from the sky were “blessed by the Father”.

Well, this is certainly good news for Kevin Spacey and the rest of the faggot rape monsters in Hollywood, Washington, and the world at large, because the Sodomites were literally rape monsters who went to Lot’s house after seeing two men arrive and enter Lot’s home as guests, and DEMANDED THAT THE MEN BE BROUGHT OUT OF THE HOUSE SO THAT THE SODOMITES COULD GANG RAPE THEM.

“Come, come, BLESSED BY MY FATHER, come with Me.” -Antipope Bergoglio, Likely False Prophet Forerunner of the Antichrist

And God seeing that the wickedness of men was great on the earth, and that all the thought of their heart was bent upon evil at all times, it repented* Him that he had made man on the earth. And being touched inwardly with sorrow of heart, He said: I will destroy man, whom I have created, from the face of the earth, from man even to beasts, from the creeping thing even to the fowls of the air, for it repenteth* Me that I have made them.

**God, being unchanging, does not “repent” – the archaic expression is used to convey the enormity of the sinfulness and depravity of men, so far gone that God determined that they had to be destroyed. To say that these people were “blessed by the Father” is satanic.

And the two angels came to Sodom in the evening, and Lot was sitting in the gate of the city. And seeing them, he rose up and went to meet them: and worshipped prostrate to the ground,  And said: I beseech you, my lords, turn in to the house of your servant, and lodge there: wash your feet, and in the morning you shall go on your way. And they said: No, but we will abide in the street.  He pressed them very much to turn in unto him: and when they were come into his house, he made them a feast, and baked unleavened bread and they ate: But before they went to bed, the men of the city beset the house both young and old, all the people together. And they called Lot, and said to him: Where are the men that came in to thee at night? bring them out hither that we may know them:

Lot went out to them, and shut the door after him, and said: Do not so, I beseech you, my brethren, do not commit this evil. I have two daughters who as yet have not known man: I will bring them out to you, and abuse you them as it shall please you, so that you do no evil to these men, because they are come in under the shadow of my roof. But they said: Get thee back thither. And again: Thou camest in, said they, as a, stranger, was it to be a judge? therefore we will afflict thee more than them. And they pressed very violently upon Lot: and they were even at the point of breaking open the doors.  And behold the men put out their hand, and drew in Lot unto them, and shut the door:

And them that were without, they struck with blindness from the least to the greatest, so that they could not find the door. And they said to Lot: Hast thou here any of thine? son in law, or sons, or daughters, all that are thine bring them out of this city: For we will destroy this place, because their cry is grown loud before the Lord, who hath sent us to destroy them. So Lot went out, and spoke to his sons in law that were to have his daughters, and said: Arise: get you out of this place, because the Lord will destroy this city. And he seemed to them to speak as it were in jest. And when it was morning, the angels pressed him, saying: Arise, take thy wife, and the two daughters which thou hast: lest thou also perish in the wickedness of the city.

And as he lingered, they took his hand, and the hand of his wife, and of his two daughters, because the Lord spared him. And they brought him forth, and set him without the city: and there they spoke to him, saying: Save thy life: look not back, neither stay thou in all the country about: but save thyself in the mountain, lest thou be also consumed. And Lot said to them: I beseech thee my Lord, Because thy servant hath found grace before thee, and thou hast magnified thy mercy, which thou hast shewn to me, in saving my life, and I cannot escape to the mountain, lest some evil seize me, and I die:  There is this city here at hand, to which I may flee, it is a little one, and I shall be saved in it: is it not a little one, and my soul shall live?

And he said to him: Behold also in this, I have heard thy prayers, not to destroy the city for which thou hast spoken. Make haste and be saved there, because I cannot do any thing till thou go in thither. Therefore the name of that city was called Segor. The sun was risen upon the earth, and Lot entered into Segor. And the Lord rained upon Sodom and Gomorrha brimstone and fire from the Lord out of heaven. And he destroyed these cities, and all the country about, all the inhabitants of the cities, and all things that spring from the earth. 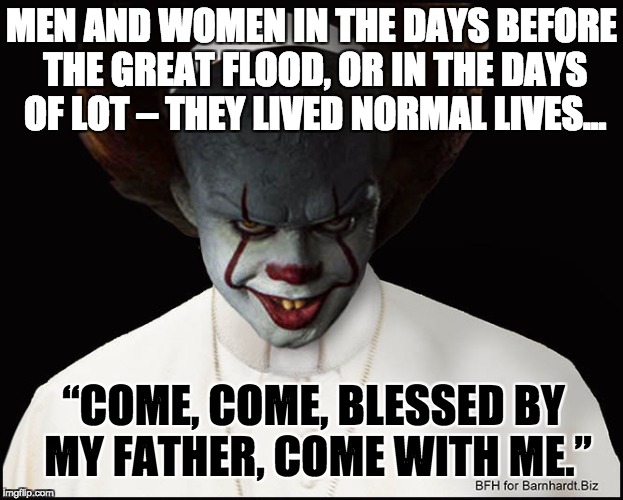 And yes, before you ask, I absolutely find the offering by Lot of his two virgin daughters to the throng of faggot rape monsters to be one of the single most disturbing things in all of scripture.  But that’s what happened. That’s how it went down.  There will be no sugarcoating.  The two Angels made sure that the daughters were safe.  But, yeah.  It is certainly disturbing. I won’t argue the point.

If Our Lord’s promise to Peter and his successors, and to The Church, His Bride, includes Peter declaring the denizens of Sodom and Gomorrah to be “normal” and “Blessed by the Father”, then Our Lord’s promises are empty.  If His promises are empty, then He is not God.  If He is not God, then His death on the Cross is meaningless and we aren’t saved.  And if we aren’t saved, then euthanasia seems the only sensible path forward.

But, we know that Our Lord is God, and that His promises are unbreakable and that He is perfectly faithful and trustworthy, so therefore, there has to be something wrong with the base premise, and the base premise is that Bergoglio is the Pope.  Therefore, Bergoglio must not be Pope.  Something unprecedented must have happened that allowed a man to appear to ascend to the See of Peter, but in truth is an antipope and usurper.  And, sure enough, we saw exactly that – an unprecedented attempted partial-resignation and “expansion” of the Petrine Office into a “collegial, synodal” paradigm. We also have Canon Law to confirm that such a substantial error would invalidate such an attempted resignation and leave the Pope, in substantial error, still the one and only holder of the Petrine Office whether he liked it or believed it or not, and any conclave called before his death or legal resignation would be invalid, and any man faux-elected in such a conclave thus an antipope.

In order to maintain the lie that Bergoglio is the Pope, one has to either hold that Jesus Christ is a liar and a reneger on His explicit promises to His Bride, the Church, which then by definition denies His Divinity, and thus the existence of The Church at all, and/or one must hold that the Papacy is and always has been COMPLETELY IRRELEVANT and a mere “label” assigned to one or more men that can be completely ignored and disregarded, and certainly without any supernatural protection or grace of state.

Either way, satan squeals with delight.

Both of these positions are clearly false, and one need not be a cradle Catholic, have a degree in theology, law or anything else to think through these obvious, simple logical progressions and recognize them as such. Nothing about the Petrine Office applies to him, so, yes, I sit in judgment of Jorge Bergoglio.  He is an arch-heretic.  He is a criminal.  He should be forcibly removed, laicized, and ideally imprisoned. He is the single most dangerous man on the planet today – he is murdering souls on a level that is impossible to comprehend.  Only God knows the tally of people who have died, are dying or will die and be damned to eternal hell because of the blasphemous lies that this evil, wicked, degenerate man spews every day whilst masquerading as Peter.