Huma Abedin has been in the news quite a lot lately.  Yeah.  I’ve been screaming about Huma, who is a high-ranking Musloid Brotherhood operative, for YEARS.  Go to the search box to your right and type in “Huma Abedin”, and block out a few hours for reading.  And since my website remodeling, my archive only begins at January ARSH 2013.  There was even more before then.

I have a correspondent who lives (for work reasons) deep in the heart of the musloid world, and shares all kinds of interesting information with me about the culture and its dynamics.  A while back, we were talking about the racial hierarchy amongst musloids – which is, as you might expect, one of the most wildly racist (in the true sense of the term) cultures on earth.  They all hate each other.  This conversation then led to the citation of Huma Abedin, and that’s when it got REALLY interesting.

So, in case you haven’t been paying attention, Huma Abedin is the daughter of two of the highest-ranking officials in the Muslim Brotherhood.  Huma and her sister have both worked intimately and for YEARS on the Musloid Brotherhood’s propaganda rag, Journal of Muslim Minority Affairs, which was founded by her father, and then taken over by her mother when he died.  These people are Musloid Brotherhood royalty.  Everyone knows exactly who they are.

Now Huma Abedin’s father was Indian musloid, and her mother is a Pakistani musloid. Remember this.  There will be a quiz later.

Apparently, in the musloid hell-world, the hierarchy of races goes like this:

Caucasian musloids are at the top, and hate EVERYBODY.  This group is basically Persians (Iranians), and Turks.

Next are the Arabs.  The Caucasians hate their guts but tolerate them because they have all of the demonic monuments, and because, awkward… “mohammed” was, according to the fictional backstory, an Arab.  So… yeah.

Next comes the North Africans, who are kinda white, or at least used to be.  But we aren’t allowed to talk about that, because over the last 40 years an entire bullshit narrative about the ancient Egyptians being dark-skinned blacks has been promulgated, and all lies must be swallowed whole, with a big toothy grin. Libya, Tunisia, Algeria, Morocco.  All basically caucasoid.

Next in this sad hierarchy comes the East Asians, or as I call them, ‘Da Slants. Shout-out to my Indonesian, Filipino and other rice-eating friends.  But all the musloids listed above hate and look down of the East Asian musloids.

Next on our little world tour, we fly all the way back to Africa, where we find the black-skinned, sub-saharan musloids.  Nigeria, Sudan, etc.

Finally, at the bottom of the list are the SOUTH ASIANS. Afghanistan, India, Bangladesh and Pakistan. They are considered a servant class – probably because they have some of the highest inbreeding rates, and their IQ bell curve is skewed very far left.

So, back to Hillary.  You all know my position on American politics, most especially “presidential” elections: IT IS ALL KABUKI THEATER BULLSHIT. I would sooner sit down and have a serious discussion about the latest in Professional Wrestling than this Hillary-Trump farce.  It’s all fake.  It’s all been planned out for YEARS.

So, your “president” Hillary is going to be utterly disregarded and will have ZERO personal authority or gravitas when dealing with musloid leaders – not unlike Obama, except even worse.  And here’s why:

First: Hillary Clinton is a female, and the musloids won’t be keen to bow and scrape to a woman.  I personally CANNOT WAIT for the first time someone asks Hillary what BILL Clinton thinks of X, Y and Z.  Delicious!

Second: Hillary Clinton is a lesbian.  Do you think that these musloids don’t see the same things we see?  The same interviews with Bill’s mistresses, college acquaintances and Arkansas associates, in which Hillary’s lesbianism was a VERY open secret?

Third:  Hillary Clinton’s lesbian concubine is, by all accounts, Huma Abedin.  They basically live together, and have for years, even sleeping together when on the road.  Huma Abedin was literally Hillary Clinton’s Monica Lewinsky analogue at exactly the same time in the late 90’s.  Abedin was placed in the White House as an intern to Hillary in 1996, and they have been together ever since.  Make no mistake, Huma Abedin will be the Edith Wilson to Hillary’s stroked-out Woodrow. And Huma Abedin is Pakistani-Indian.

So not only is Hillary a woman and a lesbian, but her concubine is the lowest-of-the-low on the musloid racist totem pole.

But wait!  It gets even better!

Up until a few hours ago, Huma Abedin was in a totally, 100% FAKE marriage to the single most repulsive, odious, embodying-every-possible-negative-stereotype-about-Jews Jew, Carlos Danger himself, “The Mongoose”, Anthony Weiner.

Weiner is a textbook somatic narcissist, and sex pervert, having been drummed out of Congress and then out of the Mayoral race in New York City for literally sending pictures of his genitals to, well, pretty much anyone and everyone.

But let’s get super-serious for a moment.  In my work on Diabolical Narcissism, what became clear was that ALL DNs are a CLEAR AND PRESENT DANGER TO CHILDREN.  All of them.  And by extension, all sodomites and aberrosexuals of EVERY STRIPE, because aberrosexuality is derivative of DN, are ALL, EVERY SINGLE ONE, clear and present dangers to children, including their own children, and close family members.

Well, yesterday it was revealed that Anthony Weiner texted a shot of his erection to some random woman with his FOUR YEAR OLD SON, Huma Abedin’s son, lying next to him asleep in bed.

Huma Abedin knows and has known exactly what kind of a piece of shit Anthony Weiner is all along.  She is Musloid Brotherhood royalty, and married and bred with the single most repellant Jew alive today, and then promptly dumped her prop child in the lap of a man she knew to be a psychopathic sex pervert, so she could go rule the world and rebuild the Caliphate with her lesbian sugarmama, Cankles.

So, yeah.  I, for one, can not wait until Hillary Clinton, on some state visit to Yemen or some shithole like that, gets shuffled off to the side, because, let’s face it, the Bangladeshi slave boy that cleans out the pit toilet outranks her on the social precedence scale.

Here’s a lovely recent shot of Edith and Woodrow Wilson, in matching outfits. Don’t plan on actually digesting your dinner. 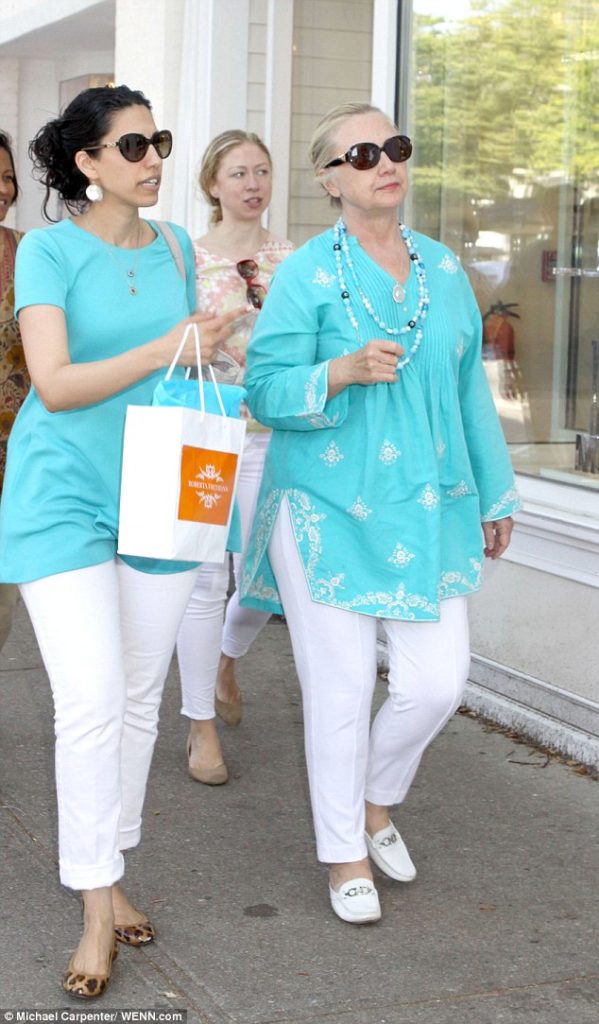