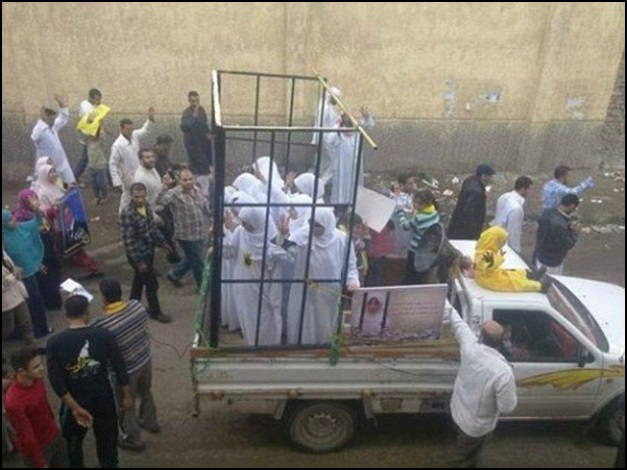 Half of the 19 Yazidi Girls being taken to be burned alive.

I was corresponding with someone about the 19 Yazidi Girls who were burned alive in Mosul a few days ago.  They refused to be sex slaves, and were thus gruesomely executed.

Here is another reason why it is very, very salutary to think long and hard about hell, what it is like, and how long it will last – which is to say, ETERNITY.

I will consider it a great favor if I die in the coming war quickly – say in an explosion, or being shot in the head, or even in the body and bleeding out.  What I SUSPECT will happen is that I will end up captured, and will then be tortured and raped for some period of time.  Maybe days.  Maybe weeks.  Maybe years.  Maybe decades.  Plenty of people were held for decades in Soviet, Chinese, and North Korean gulags, and in dungeons in Romania and Southeast Asia.  It is possible.

If one thinks about hell now, if one ends up in such a situation, be it something like the 19 Yazidi girls suffered, burning alive, or long-term imprisonment, torture and rape, if one has spent a good long time thinking about hell and eternity, it will strengthen and fortify one to realize that there is nothing – ABSOLUTELY NOTHING – that any human torturer can do, no matter how utterly diabolical they may be, that will last for all eternity.  It will be over, at some point.  It will finish. It WILL stop.

Where you go after the minutes, hours, days, weeks, years or decades of torture you may have to suffer on this earth are over is FOREVER and will NEVER, EVER END.

So, as long as you are on this earth, no matter what happens, just remind yourself, “This WILL be over soon. This WILL NOT go on forever. This is NOT my eternal fate. This WILL pass. I can make it.”

And if you are able to see your death coming, try to die telling God that you are truly sorry for all of your sins foremost because they hurt and offended Him, and secondarily because you don’t want to go to hell.