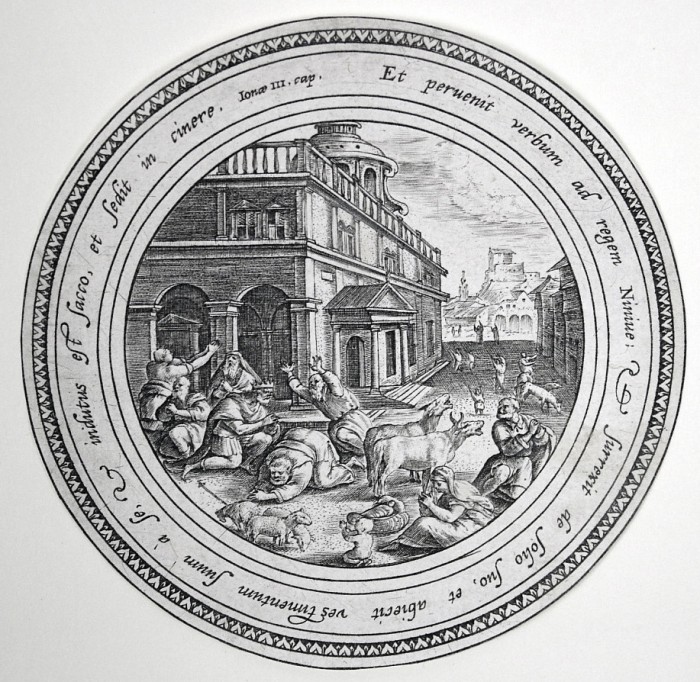 “The King and People of Ninive Repenting”, Crispin de Passe, engraver, from the Story of Jonah, c. 1586, after the drawing by Maarten de Vos

The text around the border is Jonas 3: 6

And the word came to the king of Ninive; and he rose up out of his throne, and cast away his robe from him, and was clothed with sackcloth, and sat in ashes.

Here is the entirety of the Epistle from Today’s Mass, Monday in Passion Week, the Third Chapter of the Book of Jonas.  I have replaced “Ninive” with “America”.  It reads like a sick joke.

And the word of the Lord came to Jonas the second time, saying: Arise, and go to America the great city: and preach in it the preaching that I bid thee. And Jonas arose, and went to America, according to the word of the Lord: now America was a great city of three days’ journey. And Jonas began to enter into the city one day’ s journey: and he cried, and said: Yet forty days, and America shall be destroyed. And the men of America believed in God: and they proclaimed a fast, and put on sackcloth from the greatest to the least.

And the word came to the President of America; and he rose up out of his throne, and cast away his robe from him, and was clothed with sackcloth, and sat in ashes. And he caused it to be proclaimed and published in America from the mouth of the President and of his Congressmen, saying: Let neither men nor beasts, oxen nor sheep, taste any thing: let them not feed, nor drink water. And let men and beasts be covered with sackcloth, and cry to the Lord with all their strength, and let them turn every one from his evil way, and from the iniquity that is in their hands. Who can tell if God will turn, and forgive: and will turn away from his fierce anger, and we shall not perish? And God saw their works, that they were turned from their evil way: and God had mercy with regard to the evil which He had said that He would do to them, and He did it not.