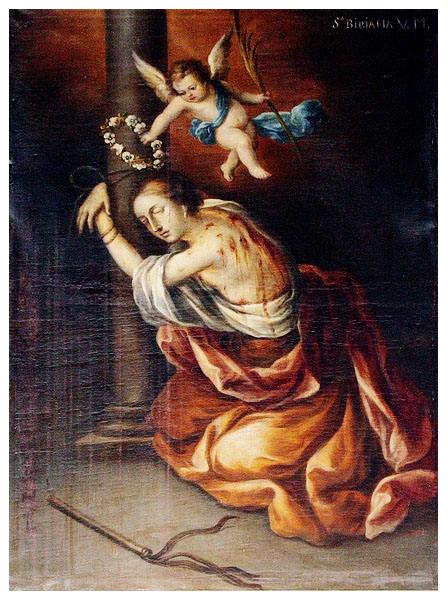 The scourging to death of St. Bibiana in ARSH 363.

St. Bibiana was a young woman of Roman nobility in the Fourth Century. The wicked Roman emperor, Julian the Apostate, executed her parents and sister for being Christians, and then turned Bibiana over to a wicked woman and owner of a brothel named Rufina.  Rufina, a pagan, was very skilled in recruiting and tricking girls into the sex trade, but Bibiana never, ever wavered or faltered.  Bibiana, you see, was a CHRISTIAN FUNDAMENTALIST.  When it became clear to Rufina, and then Julian, that they would get nowhere with Bibiana and that she would never, ever compromise on the FUNDAMENTALS OF CHRISTIANITY by either acknowledging in even the smallest way the pagan “gods”, or in matters of sexual purity, Julian had Bibiana tied to a column and scourged to death with a flagellum with lead beads attached to the tips of the leather straps, designed to tear away large chunks of her flesh with every stroke.

I was especially struck yesterday at Mass for the Feast of St. Bibiana by the strength of the variable parts of the Mass for a Virgin Martyr, especially the Introit and the Communion, both from, once again, Psalm 118, King David’s love song to the Law.

Introit:
The wicked have waited for me to destroy me: but I have understood Thy testimonies, O Lord: I have seen an end of all perfection; Thy commandment is exceeding broad.  Blessed are the undefiled in the way: who walk in the Law of the Lord.
(Psalm 118: 95-96)

The phrase “Thy commandment is exceeding broad” is a bit easy to glaze over given its somewhat antiquated construction.  What does “exceeding broad” mean?  It means that God’s Law applies to all men in all places and in ALL TIMES.  God’s Law does not have “edges”, and it will never be inapplicable or obsolete, it will never expire or change; it will never mislead or forsake those who follow it.  Mankind has not, can not and will never “move beyond” God’s Law, no matter what anyone, and I mean ANYONE, tells you in order to try to win your favor.